Time Goes By So Slowly

The proliferation of smartphones over the last decade has ushered in a cottage industry of mobile RPGs on every device and platform imaginable. Some titles are behemoths in their field, generating extensive profits and a large fanbase of gacha whales while other titles are canceled before their first anniversary. Many of these games provide a base free-to-play experience, but rely on randomly selected characters or loot-box-esque mechanics to entice players to spend real currency for another draw. Prominent mobile developer Netmarble has made the decision to create a spin-off title for its Seven Knights mobile RPG for the Nintendo Switch, replacing the free-to-play and gacha elements with a single purchase. Unfortunately, Seven Knights: Time Wanderer hews too closely to its mobile ancestor, providing a linear and simplified RPG experience that doesn’t translate well to console.

The player controls Vanessa, a young girl who very quickly is transported to another dimension and transformed into an adult woman. Vanessa encounters a talking hourglass who agrees to help her track down missing time crystals needed to return her to her time period. From there, players cycle through a series of dimensions to collect items, befriend over a dozen allies, and fight monsters while searching for the missing time crystals. While the story doesn’t require any knowledge of the Seven Knights mobile title, what’s there is sparse and uninspired. There is no true characterization for Vanessa or any of her companions. The game eventually provides opportunities to participate in additional character-building skits, although the dialogue for each party member is trite. It is difficult to understand the motivations of the case as the game does not devote more than a few lines of text for each introduction before they are relegated to an eventually bloated roster of aesthetically inconsistent characters. 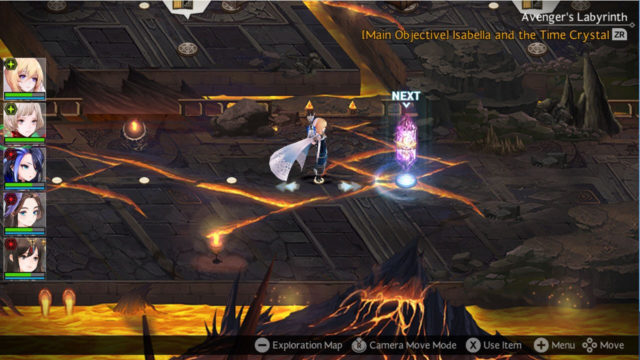 Each dungeon resembles a game board with enemies, story sequences, and items located on individual nodes.

After the introduction, the game settles into a familiar rhythm. Starting in a central hub, the player is given an opportunity to purchase items and equipment or engage in side-missions. When ready, they use the dimensional border to transport into the shadow realm. Each dimension is essentially a game board, with the player traveling across a series of nodes from one end of the map to the other. As the player travels across each node, treasure chests and enemies materialize with little notice. There are branching paths that usually lead to an item or fast-travel point but otherwise the experience is linear and passive. Other nodes include story scenes, which typically result in a new character joining the party, some type of boss battle, or both. It’s reminiscent of a mobile RPG overworld, with little to no sense of exploration or discovery.

Combat in the game is markedly different than its mobile progenitor. The game features a turn-based battle system where each side is able to select one attack per turn. The player is given approximately three seconds to choose which attack or spell to let loose. If an action is not chosen, the turn is forfeited. In theory, this paradigm requires quick input in order to launch a successful attack. However, with five playable party members (each with three attacks), the player must move incredibly quickly or pause the game to decide. Each action is represented by an icon, frequently leaving the player to toggle the on-screen explanation of each attack. The battle system also relies on elemental exploits. Each character and enemy has an assigned element, viewable on-screen during battle. If a party member takes advantage of an enemy’s weakness, a second attack is granted. This system is easy enough to exploit in random encounters with multiple enemies of the same type and the game deserves credit for attempting to introduce real-time elements and a battle system with layers of complexity, but the end result is mostly dizzying. It is difficult to evaluate the impact of the enemy’s last turn and make a strategic decision about how to respond before the timer runs out, leaving your party vulnerable to a second attack. This is incredibly frustrating given the player will spend much of the game in battle. 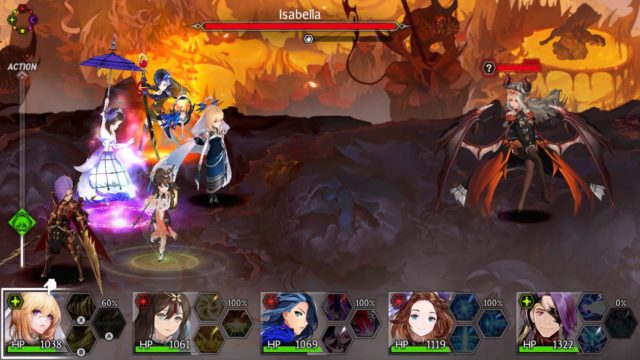 Battles can be unnecessarily frantic when trying to determine which skill to use.

The game boasts beautiful character art but the in-game and battle sprites are entirely unremarkable, while the battle graphics feel on par to an early 3DS title. Many attack animations are dynamic and take up the entire screen, conveying a sense of power to the attacking character. The background images of the dungeons are well drawn and detailed, but do little to elevate the actual gameplay experience. Still, the jagged edges of the character models in-game are a bit jarring.

Similarly, the game’s soundtrack is entirely forgettable, does not produce any standout tracks, and is frequently drowned out by the Japanese-only voice acting. There is a blandness which permeates the entirety of the game that simply serves to remind the player of the game’s lineage. Making matters worse is the sub-par performance of the game with frequent slowdowns or sputters during transitions or even during battle without appearing to tax the limitations of the hardware.

With the release of Seven Knights: Time Wanderer, Netmarble attempts to replicate their free-to-play title’s success with this console offering. Unfortunately, the game underserves both the source material and players on the Switch. While fans of the Seven Knights mobile game may enjoy this title, there are scores of more fulfilling experiences available on the console.