Lost in a Dream

Record of Lodoss War is a high-fantasy anime, manga, and video game series written by Ryo Mizuno. In the west, the series has seen limited popularity with a recent re-release of the ’90s anime and OAV series, and now a new PC game featuring Mizuno’s involvement. For western fans, until last month’s full release of Record of Lodoss War: Deedlit in Wonder Labyrinth, the only other localized Record of Lodoss War game was released in 2000. From Publisher Playism and developers Why So Serious? and Team Ladybug, the sidescrolling Metroidvania was first available on Steam Early Access in March 2020. Despite the acclaimed Lodoss license, the story mostly takes a backseat to the engaging and refined gameplay mechanics.

Record of Lodoss War: Deedlit in Wonder Labyrinth begins with the title character, Deedlit the High Elf, waking up in a strange land with no recollection of the circumstances leading her to that moment. As players explore, Deedlit encounters both friends and foes from the Lodoss universe, although something seems amiss. The characters recognize each other but everyone appears in a fugue, speaking vaguely. Described as “depicting the story of Deedlit and the events leading up to Record of Lodoss War: Diadem of the Covenant,” an unreleased sequel series penned by Mizuno, the narrative at first appears to be little more than a side-story or a game borrowing themes and character archetypes from a licensed property. While the story develops further, it has difficulties dispelling the fan-fiction-esque quality of the game’s truncated script and relatively marginal characterization. Little to no background knowledge of the series is required to enjoy the game or story, while series veterans may be disappointed by brief appearances of series characters with no context of the series’ history. 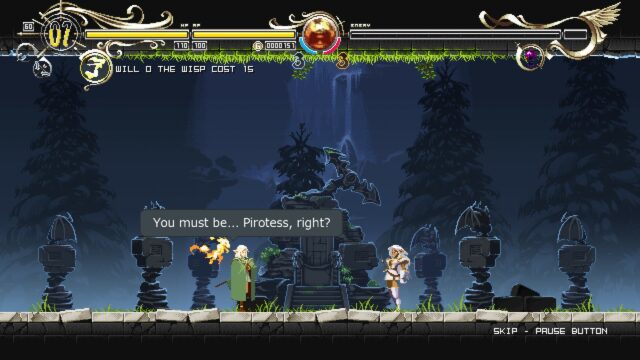 The story feels like fan-fiction…not that there’s anything wrong with it.

The gameplay is where this title truly shines. There are six stages in the game, each featuring its own distinct visual style. Players will control Deedlit as she double-jumps, slides, and battles through haunted forests, abandoned castles, and more. The elf has quite the arsenal at her disposal as she is able to equip a short and long-range weapon and can cycle through various spells and items to use through her adventure. There are two battle stances based upon the spirits of fire and wind, which themselves can power up, allowing for strong attacks and immunity to attacks of the same element. If a player encounters a particularly tough enemy while equipped with the wind spirit, shifting to fire typically reveals a weakness to exploit. Negotiating the weapons, spells, items, and various abilities may overwhelm at first, but before long the game establishes a fluid, dynamic, and comfortable rhythm. Moving Deedlit through a gauntlet of enemies while cycling between bow and magic attacks feels substantive and satisfying, especially after clearing a problematic area rife with enemies.

Boss fights are another highlight of the gameplay. Intricately designed, crisply drawn, and frequently full-screen-sized, these enemy encounters demonstrate the true depth of the underlying mechanics. During these battles, Deedlit will not be able to simply evade attacks while chipping away at a health bar. Instead, players have to toggle between the two spirits to maximize any elemental advantage, ascertain any other weaknesses, and monitor Deedlit’s health while staving off dragons, elves, and other fantasy creatures. Many, if not all, boss fights require quick on-the-fly shifts between the two elemental paradigms which provide additional layers of both strategy and anxiety. Each of the two spirits has its own level that, when at maximum, will gradually restore Deedlit’s health. As sustaining damage reduces the element’s level, savvy players who can avoid damage can shift between the two stances to count on a steady stream of health without depleting the limited stock of curatives. 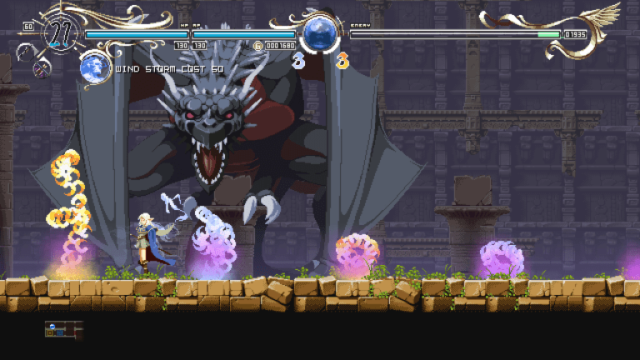 While Deedlit is seemingly given free rein to explore, players are quickly blocked by sealed entrances, color-coded locks, or impossibly high cliffs. Even though the game is fairly linear, this sense of being on-the-rails dissipates as players slowly acquire jumping abilities or can rely on the wind elemental to float for extended periods. Clearing portions of a stage or unlocking a door frequently yields access to a previously inaccessible section of an older stage. This is usually where power-ups and other items or weapons are acquired. This sense of exploration encourages gamers to return to older levels and see what potions or spells await the curious. Likewise, there are items hidden behind breakable walls or in paths hidden just off-screen. It is both fulfilling and rewarding to fill out each stage’s map, not only to see how the levels are connected but also to obtain these new weapons, items, and stat boosts. Aside from these extra routes, there are a host of entertaining mini-games inexplicably scattered about. Players are able to gamble in a complicated dice game or even participate in an archery competition. These detours from the side-scrolling offer a brief respite and small bursts of fun.

Each stage is appreciably different in tone, sound, and presentation. The soundtrack is a pulsating hybrid of synthesized, electronic, 16-bit era sounds combined with the haunting moans of an organ. The abrupt change in music between stages underscores the effectiveness of this range of wildly different, but tonally consistent, musical themes throughout the game. The “Dark Capital” stage in particular demonstrates an unusual and hypnotic background theme. The graphics are similarly inspired, featuring a pastiche of 16-bit and 32-bit-era styles. Each individual stage is intricately detailed, with moss growing on gargoyles left in the sun in one stage, or the tendrils of a plant-like monster reaching out, almost yearning to touch Deedlit in another. Enemies are ornately decorated as well, with flesh hanging off a zombie in one level or an assassin-type character emerging from shadows later on. While enemies and bosses feature finer graphical flourishes, Deedlit and other human characters demonstrate a lower resolution, featuring 16-bit renderings which move with remarkable fluidity and grace during combat. 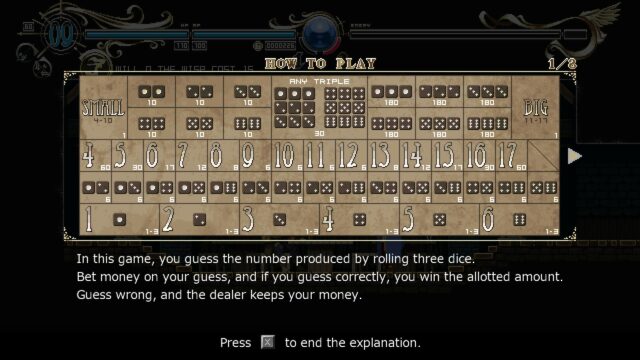 Some mini-games provide a nice break from the action

Together, the refined battle mechanics and smooth presentation converge to provide a taut but imperfect gameplay experience. Each stage is just long enough, as by the time a player grows tired of it, Deedlit is entering the next, providing an abrupt shift in sights, sounds, and enemy types. As Deedlit grows stronger with each level, more formidable and challenging enemies await. While the game mechanics are fine-tuned, the total experience is relatively short-lived, with an approximate six to seven hours to complete the game’s six stages. The final stage features a boss rush, requiring the player to fight every boss encountered thus far in the game. It feels a bit like padding, considering how recent the latest boss fights were.

Ultimately, Record of Lodoss War: Deedlit in Wonder Labyrinth emphasizes gameplay at the expense of story and bows out a touch too early. An abundance of weapons, abilities, and playstyles combine with a dazzling audio and visual presentation, producing a challenging, fair, yet brief experience that is sure to please both Record of Lodoss War and Metroidvania fans alike.