It’s been a very long time since I got addicted to a game in the same way Rainbow Skies managed.  Rather appropriately for a game developed by SideQuest Studios, I couldn’t manage to stop exploring its intricate world and accomplishing the enormous range of tasks that feel enticing instead of laborious. Rainbow Skies is not for everyone, considering that it asks for quite a bit of one’s time and attention. It did an excellent job of captivating me though, and hopefully a few more people can be enticed into trying this title.

This is a game with an enormous amount of content to investigate, and the vast majority depends upon the player doing things within the world. Skills get more powerful through use in battle, and can unlock other skills after enough use. Hidden treasures depend upon careful investigation of the environments, while buried goodies require maps in order to locate. Equipment can be enhanced through inserting materials gained from dead enemies, and using the various kinds of kit in combat allows more materials to be inserted. Side quests exist for everything from specific types of fish, to optional monsters, to locating hidden items, along with many more options, and they’re quite diverting. Accomplishing the side quests also gives another incentive to explore the sizable land and sea of Rainbow Skies, which is impressively varied and worth doing. Trying to accomplish everything in this title is a very time-consuming endeavor but also very rewarding.

Combat takes place on a tactical battlefield which the participants must navigate. Each combatant has a number of actions that may be performed each turn, and many types of special ability require that those affected be in a specific spot or else the technique cannot be activated. Terrain does not play a role in the encounters, but defeated enemies often drop spoils that act as barriers on the field. Only the player’s characters can gather these rewards, which present an impassable obstacle to all combatants until they are picked up.  Certain opponents visible while exploring must be defeated to progress, but random battles frequently appear in which the player always has the choice of whether to engage or ignore the antagonists. 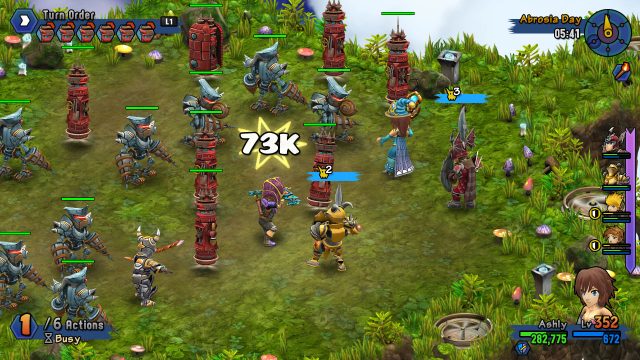 There’s no reasoning with this brand of artificial intelligence, only killing!

A wide variety of enemies will be fought against in Rainbow Skies, and learning what they can do is critical for progress. There will be times when the player does not have the power to take down everything quickly, but does have the ability to inflict status ailments to temporarily remove a threat. Enemies show no compunction about doing the same to the player, and while their AI is not stellar, the powers these adversaries wield are often sufficient to win against even a party that seems well-prepared.  This excellently serves to keep the player’s attention during the many instances of combat during the game.

Difficulty is handled in an unusual fashion, having a total of nine possible options during the game. Increasing the difficulty requires the player to complete a set number of battles against opponents fairly close in level to the party, but if the enemies become too strong the challenge can be immediately lowered again. Accessing the highest difficulty will require hundreds of fights in total, though the game provides greater rewards from battle as an incentive to try doing it. As the game has no penalty for defeat except for needing to revive the downed characters, experimenting with the challenge is encouraged.

Simply increasing character levels is ineffective when it comes to doing well in combat. All equipment can be enhanced using a huge variety of materials dropped by enemies, and increasing the statistics of a character in this way is much more useful. Each technique is also leveled and improved through repeated use, with many of them potentially going all the way to level 200. Doing this is not a quick procedure but affords the player a cornucopia of potential methods to triumph when the going gets tougher.  It also provides even more of an incentive to get into fights, because only through action in combat can the improvements be made. 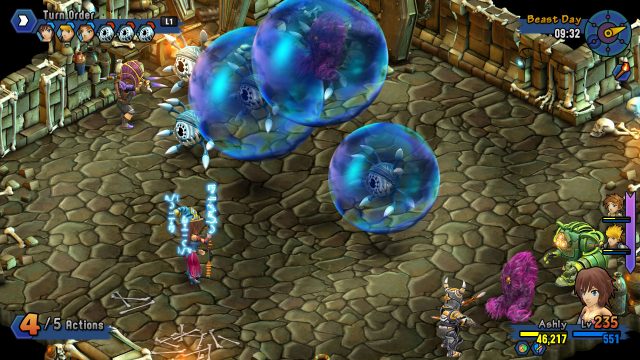 There may come a day when giant blue blobs descending upon a person is not a cause for concern. This is not that day.

The enormous variety of things to do and procure comes with a lot of time spent on inventory management. Rather than one location from which to engage in commerce, the player needs to traipse around separate establishments for every type of transaction. Each subset of the inventory also comes with its own individual area within the menu, and while the limit on carrying capacity for all groupings can be increased it all adds up to a lot of management by the player. This is another way in which Rainbow Skies demands time from one playing it, though its menu management is very speedy after becoming accustomed to it.  Multiple ways of organizing each subset are also present to keep players from having to spend excessive time hunting for specific things.

The dialogue is lighthearted and well-written, which helps because the narrative on the whole doesn’t get developed enough to be terribly interesting. The leads have a couple of character traits and don’t expand beyond them, nor do they change as a result of events while traveling. Some of the bizarre personalities encountered along the way are interesting for a few minutes, but Rainbow Skies is not a game to obtain in hopes of a powerful narrative. 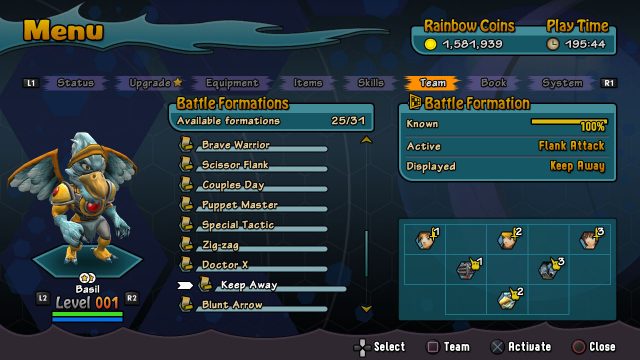 Who wants some choices about how to arrange the party? If not, too bad, they’re here anyway!

Structurally, the narrative seems to have concluded before its postgame begins. This is a fake-out because the game does not even go back to the title screen after the ending, instead unveiling a logical continuation of events. This portion of the game is even lighter on narrative than what preceded it, but affords the opportunity to investigate numerous areas that were previously inaccessible, along with quite a few quests and other things to keep the player busy. It’s an odd choice to have so much of the game visible during the main proceedings but locked off until the credits have rolled, but does provide even more ways to engage the player’s time through doing what was already addictive.

Rainbow Skies‘ visuals will not attract much attention from mainstream press looking for photo-realistic effects, and don’t strain Sony’s hardware. They do have a great deal of personality and variety to reward players that more than makes up for the lack of jaw-dropping but bland effects. Enemies have unique looks that are charming, and combat animations are enjoyably creative. The characters also change appearance for each piece of equipment, with the changes all coming across as distinct.  Each environment also manages to stand out among everything to be seen in the game without blending into interchangeable spots on the map. 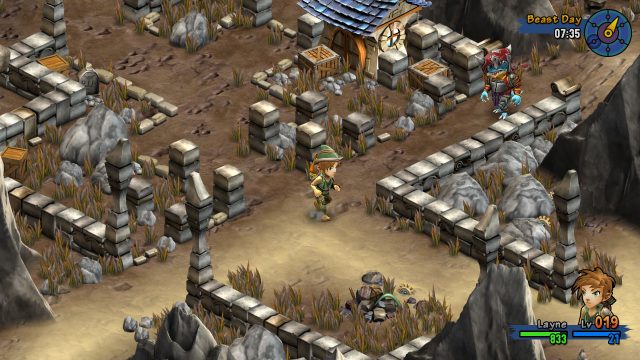 Anybody want to take part in some rock farming? It’s here just in case.

A good variety of music is there to be heard, and all of it is at the very least pleasing to the ears. Rainbow Skies‘ great variety of battle themes is particularly appreciated given how much time will be spent in combat, and none of them is irritating while most manage to be quite catchy. Sound effects are also something that received plenty of attention, from the unique and effective noises made by enemies upon death to the very helpful chime indicating the presence of a hidden treasure. Voice acting by the leads involves recycling a few clips throughout the game, but the NPCs at least have a surprising variety of short comments that manage to be amusing.

It’s telling that it took me so long to finish the game, and then kept playing into the postgame instead of setting Rainbow Skies aside. I’ve now spent something like 270 hours on this game without being done, and no other game I can recall has exerted such a strong pull on my attention span. Anyone interested in a title that is charming and rewarding to spend huge quantities of time exploring should most assuredly check it out, and while the narrative won’t blow people away, it’s also not constantly forcing itself into the forefront. This may not be for everyone, but it most assuredly clicked with me.