A Crossbreed in a Hostile World

Some years ago, Square Enix announced that it was working with developer People Can Fly on a third-person shooter with RPG elements and a sci-fi story. After a number of delays, Outriders finally launched this year. This hybrid, however, needed to be groundbreaking in order to captivate the exigent fans of two very competitive genres. With an online experience that allowed players to team up in a cooperative mode, deep RPG elements, and the intensity of a shooter, the game tried to attract a considerable amount of players, yet the initial impact wasn’t as significant as the developers would have probably desired. Despite its initial reception, this RPG shooter offers a fierce journey with amusing visuals and a remarkable difficulty system.

The game is set in the planet Enoch, a world that humanity is trying to colonize since Earth has passed the point of no return. A group of soldiers called Outriders are set on a mission to secure the planet, but after landing on this unwelcoming world, they come across the Anomaly, a massive storm of energy that destroys their technology and traps them. In addition to adverse natural conditions, Enoch is home to unfriendly natives and voracious creatures, reinforcing the feeling that humans are uninvited. Motivated by this dystopian setting, players create and take on the role of an eponymous Outrider who has been in a long slumber and reawakens with supernatural powers. Players team up with a crew of scientists and soldiers to find hope in this inhospitable world.

The story progresses with the addition of some intriguing characters to the crew and some welcomed plot twists, unveiling many adverse forces and mysteries surrounding the Anomaly. Deluded characters who claim to have the power of the gods and soldiers filled with desolation help to paint a picture of what Enoch produces in its inhabitants. Besides enormous creatures and beings with devastating powers, corrupted humans also pose a threat to an already slim chance of survival. Although this hostile setting is cleverly designed and serves as fertile ground for an epic story, no character is deeply developed, and the narrative is full of sci-fi cliches, which prevent the story from being transcendent. 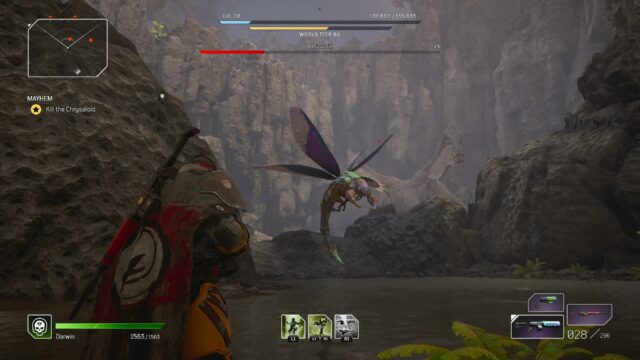 Players personalize their Outrider by choosing among four different classes. While some of them grant the power to manipulate time, fire, or seismic movements, others allow the warrior to use turrets and technological devices. New skills for each class are unlocked by leveling up, and by using the class tree, players empower their warriors or boost their skills. The class tree has different paths that allow players to develop their soldiers with diverse strengths depending on their fighting styles. This customizable system is a good addition to a shooting game and matches perfectly with the battle system.

The majority of the time players face enemies in shooting battles. Combats begin after entering an area, which are littered with objects that can be used to shield from attacks. Running and dodging are mostly not plausible options since enemies come from all directions and find spots that give them advantages, making battles a matter of patience and strategy. To defend against their foes, players equip three different weapons, including a vast array of guns with different strengths, and have three slots for skills. While some weapons are ideal for sniping, others work better from a relatively short distance. Class skills are table turners but need time to cool down. There are no healing items, but inflicting damage recovers health, which encourages players to be aggressive, yet they still need to be cautious so that they don’t get ambushed by foes. Most bosses are tough and force players to come up with creative strategies in order to deal with their devastating powers. This flashy battle system is fun, challenging, and refreshing. Additionally, it doesn’t feel disconnected from the rest of the game’s mechanics.

To make this battle system constantly challenging, Outriders includes a rewarding difficulty system that is worth noting. Players begin in World Tier 1, the easiest difficulty level from among 15. By defeating enemies in the highest Tier available, new World Tiers are unlocked. The logic behind this is that as players get better, enemies match their abilities by getting stronger. Higher difficulty levels also come with perks: the tougher the enemies, the better the odds of getting high-end loot. World Tiers affect the level of enemies and dropped loot, as well as the rate and rarity of dropped items. For instance, in the first Tier the enemy level is -2, with the legendary drop rate modifier bonus being 0; but in Tier 9 the enemy level is +6, with the legendary drop rate modifier bonus being +330%. The change in difficulty doesn’t seem drastic while advancing to the next World Tier. However, if one were to go back from level 9 to level 1, the change would be highly significant and noticeable, for an enemy would be killed with four bullets instead of forty. Players are given the freedom to choose the difficulty that they see fit at any moment. Those having a hard time can return to previously unlocked World Tiers, at the expense of missing some juicy spoils. 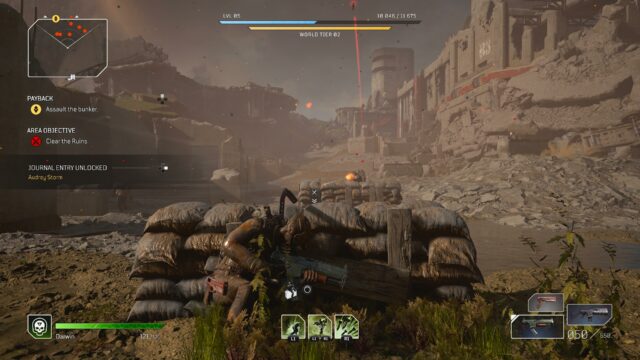 In battlefields replete with enemies, shielding is always a wise choice.

Outriders incorporates a vast array of equipable items sorted by level and rarity. Items with a higher rarity include more slots for mods, which give them some extra powers or abilities. Characters have five slots for armor besides the three slots destined for weapons. In the crafting tent, items can be leveled up, their stats upgraded, and their rarity increased. Unwanted items can be sold or dismantled, turning them into money and components used for crafting. These components can also be found and harvested in all locales. Since there is limited space in the inventory, dismantling and selling are two routine activities, and the wide set of crazy weapons encourages players to renew guns constantly.

Sidequests blend with the journey in an enriching and unexpected way, for they not only give rewards but also add content to the story. Accepting sidequests doesn’t feel like deviating from the main objective; on the contrary, the completion of these errands offers a lot of context and depth to the main plot, providing Enoch with a sense of vitality. Unfortunately, these quests tend to be mechanically monotonous since they all consist of infiltrating a place and defeating a bunch of enemies; it wouldn’t be surprising if many players opted to avoid them. Those who can bear with repetitiveness can assist troubled denizens, help a historian in her search for objects that remind her of a past civilization, hunt villains that need to be eliminated, or collect monsters’ heads for a man that hangs them as trophies.

Areas have many items waiting to be found, but exploring is disengaging due to the map. The map is separated into sectors, with marks for places of interest and sidequests. However, it only shows in which district the player is without providing a more detailed location, and the mini-map works mostly as a sensor of points of interest and objects, but doesn’t include detailed representations of the areas. It would be a great improvement if either the mini-map or the main map were more precise because it is tough to pin the exact location of the character. On the bright side, tracking quests isn’t a problem since players can summon a line that shows them the route to get to the selected quest, and moving to distant places isn’t time-consuming since there are banners used to fast travel within a city and a truck that can carry players to other cities. 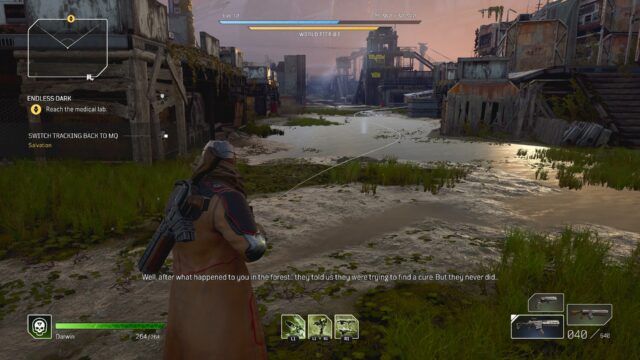 A white line shows how to reach quests in Enoch’s detailed environments.

The game shows off its refined art from the very first seconds of its introduction. Enoch’s landscapes and creatures are overall appealing, including detailed objects, varied environments that range from snowy mountains to stormy deserts, and imposing beasts full of vivid colors. Weapons and armor are visually varied and have crazy designs. These meritorious graphics are supported by a fair soundscape. The game’s soundtrack may not be impressive or memorable, but it serves its purpose. Well-crafted sound effects and convincing performances of the voice actors are the stars of the show throughout the game. The cast gives life to Enoch and its inhabitants in a unique way.

Although it can be played alone, Outriders encourages playing in cooperative mode (with cross-platform play even available), and allows up to three players to team up. Even though it’s an online game, it doesn’t include in-game purchases or other elements common to online games. There are accolades to reward those who have completed accomplishments, which come with rewards that can be used to customize aesthetic aspects, such as the looks of the truck or the main character, who can be highly personalized. Even after the main storyline is completed, the game offers extra content for those who want to continue collecting accolades, unlocking World Tiers, or just have a good time battling with friends.

In two highly competitive genres, this crossbreed may go unnoticed, but its difficulty system should be taken into account. It’s advisable to embark on the campaign of this shooting RPG since Outriders offers tons of hours of fun, invites players to play with friends, and has appealing visuals. Fans of both RPGs and shooters can get a lot out of it, but they shouldn’t expect a revolutionary game, for it is a mixed bag of interesting features and cliches. Even though the journey is enjoyable, Outriders is neither a strong contender in the RPG elite nor in the shooting universe.