In a turbulent world, everyday can feel like a struggle without end. In Othercide, that feeling is far more literal. Constantly fighting the forces of darkness, the game invites players to guide a company of empowered goth girls in the drudgery of conflict while also partaking in the repetition as well. For while at the heart of the game lies a solid combat foundation, its structure seeks to undercut it at every turn. What could have been a taut, captivating experience instead feels like too few ideas stretched too thin.

Othercide is a horror-themed tactics game from Lightbulb Crew. The game puts players in control of the Mother, a powerful being who positions herself against Suffering, another being that reflects the darkness of the world to make monsters to destroy it. At the beginning of the game, the Mother is overwhelmed by the forces of Suffering, forcing her to adopt a new strategy of giving her power to her Daughters, who comprise the units the player will control during the game. Stuck in a seemingly endless cycle of death and rebirth, the Mother and her Daughters remain the last hope to save humanity. There is more to the story, told in Memories that randomly drop during play, each giving several short paragraphs of the Mother’s long history as an immortal Chosen One. However, the game doesn’t really focus on its story outside of a handful of cutscenes pertaining to each boss. It ends up as simply a thin pretext for a series of battles and any backstory to glean is told with all the grace of a dull codex in any other RPG. 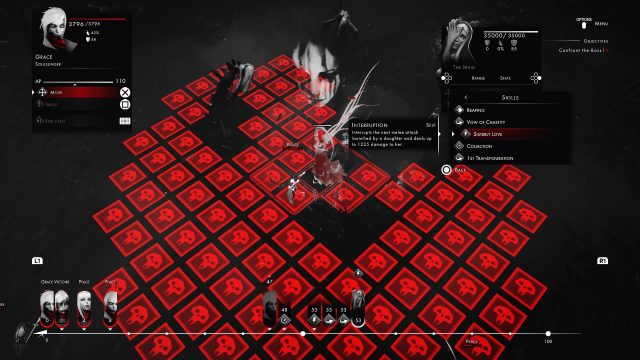 This is probably preaching to the choir, but you don’t want to be standing in the red.

Where Othercide spends most of its time is in gameplay, which quickly settles into its rhythm. The campaign is split into five Eras, each dedicated to one of the five bosses. Each Era is comprised of a number of days leading up to the boss fight, at which point that battle becomes mandatory. Before then, players are free to complete as many missions as they like to a minimum of one per day. These missions provide three rewards: Vitae, the common currency used to generate new Daughters and equip Memories; Experience, which levels up Daughters; and Shards, the currency that activates Remembrances for future runs. These incentives work initially, but quickly run into a snag. Daughters can only participate in one mission per day and each day can offer anywhere between one to four new missions. The purpose is there — players cannot grind indefinitely to trivialize the bosses and are encouraged to field multiple teams — but the end result is becoming all too familiar with the missions themselves.

In theory, missions come in four flavors: kill everything, survive a specific amount of time and escape, escort a Lost Soul, and defeat a certain enemy before time runs out. In practice, “kill everything” is the only option most of the time, with one of the other three showing up infrequently enough that its easy to forget that they are there. With the exception of escort missions, which can reward a player with a Resurrection Stone to bring back fallen Daughters, the reward scheme never changes, only offering differing values based on difficulty. While technically presenting a few options, all feel so similar that they may as well not be. The only real decision to be made is whether to complete samey missions over and over again or try and get through the bare minimum to be able to challenge the boss.

Around halfway through an Era, the boss will reveal themselves. To the game’s credit, once the boss is revealed it can be fought at any time and the game will remember this between runs. Bosses are more puzzle-like than the regular missions and many of the strategies used in the latter will not work in the former. Any Vitae or Memories gained during a run will not carry over to the next. Daughters do not carry over between runs without the use of a Resurrection Stone, a rare commodity itself, so each run will begin with fresh Daughters that will require completing more missions to give them the edge they likely had in the previous attempt. Memories are modifiers that can be equipped to Daughter’s abilities to give them additional benefits. Each ability can have one Memory equipped at the cost of Vitae, which means completing more of the same missions to both unlock Memories and the cash on hand to equip them. And the same missions they will be, right down to specific enemies and where they will spawn. 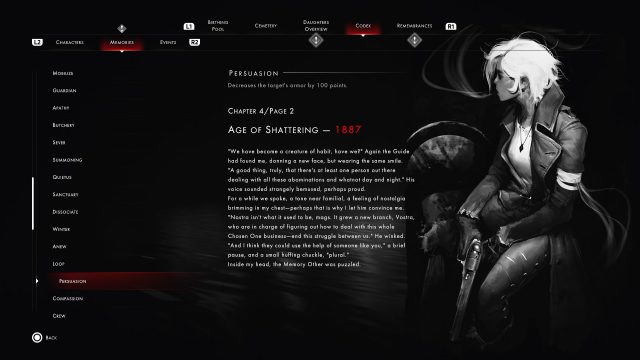 Memories provide the bulk of the game’s story.

Othercide does try to address the annoyance of failed runs with permanent upgrades through the Remembrances system. Shards can be spent at the beginning of a new run to unlock passive abilities to aid the player. Some of these are big, like defeating a boss allowing players to skip that Era and allow newly minted Daughters to start at a higher level. Others feel more basic, like increasing damage against specific enemy types, gaining more resources from missions, and starting a run with a few random Memories unlocked. Again, what works in theory fails to be interesting in practice. The methods by which Remembrances are unlocked are rarely the result of decisions made by the player. Rather, they unlock in a fairly linear fashion just through regular play. Shards are meant to act as a limitation on how many and which Remembrances can be active, but this ceiling never comes into play. At no point in my playthrough did I ever run out of Shards and by the end of the game I was able to activate all of the Remembrances with the exception of the one unlocked by beating the game. Ultimately, the system and balance feels like an effort to pad out the game’s length and ends up diminishing the overall experience rather than adding to it.

Numerous quibbles with structure aside, Lightbulb Crew has put together an engaging tactics game. Missions play out on bog-standard grid maps — one of the downsides is the blandness of the stages — but the game’s Timeline system keeps the minute-to-minute gameplay interesting. Rather than taking distinct turns, Daughters and enemies are placed on a timeline that can be manipulated in different ways. As a standard, Daughters are given 100 Action Points per turn. As long as they end their turn with 50 or more AP left, their next turn will start 50 units later on the timeline. However, if one dips below that, they will Burst and start their next turn 100 units later instead. This offers an interesting tactical choice, whether to play conservatively and act more frequently or to double-down on a big turn at the cost of acting later. As the game progresses, more abilities take advantage of the Timeline, such as offsetting a Daughter’s end of turn position closer or pushing an enemy’s further down. It is also necessary to master these concepts, as the boss fights — where the game tends to shine the brightest — will push the limits of what the Daughters are capable of. Make no mistake, Othercide‘s combat is its high point. It’s just a shame that the way the game forces players to engage with it become tiresome so quickly.

The unvarying nature of the game extends to the Daughters as well. Each is a young, white-haired girl only differentiated by their hair style, outfit, and weapon, the latter two decided by their class. The game begins with three classes with a fourth being unlocked at a certain point in the game. In a manner not dissimilar to titles like XCOM, each class gains one of two abilities every few levels, though many of the moves are clearly superior to others and hard to pass up. Abilities are split between active, which use AP, and reactive, which use a percentage of health instead. Reactive abilities tend to be more powerful and sometimes even game-breaking, rarely requiring use outside of boss battles, where they are all but required. Losing health is a big deal in Othercide as the only way to heal a Daughter is to sacrifice another Daughter of the same or higher level. While thematically resonant, it generally leads to players feeling the need to level twice as many units, half of whom are only there to be leveled simply to heal another Daughter before a boss fight. There is an additional benefit of class-based traits being passed down from the sacrificed Daughter to the survivor, but the effects aren’t cumulative and some Daughters will naturally become more worth saving than others. 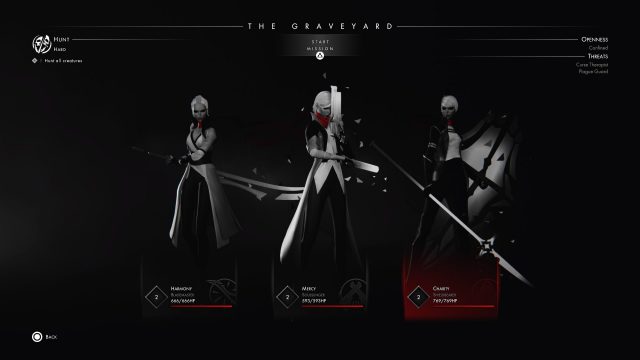 The Daughters are always ready for the next Evanescence concert.

As an audiovisual experience, Othercide plays into its aesthetic to its fullest. It maintains the same color palette throughout and the music will rarely make an impact until it transitions into a self-serious rock song that fits the game perfectly. Moody and cryptic dialogue permeates throughout and is going to be of annoyance for some, though its unashamed commitment to the theme is admirable. The monster designs, especially for the bosses, are standout. The PlayStation 4 version of the game features longer load times than are ideal, and would sometimes get fussy about backing out of menus or while highlighting specific units in battle. It also crashed a handful of times, which reset the current fight, including on bosses.

A better version of Othercide exists in another universe, one that doesn’t take the least interesting aspects of roguelikes and runs them into the ground. At its core is an interesting tactics game, but its constant need to repeat itself does it no favors. While not a long game, Othercide drags out what little there is to it and then does it all over again. The progression proceeds linearly, throwing few curve balls. The ones it does throw soon become routine, like everything else, as the same missions are repeated on the trip back to the boss. Like the Daughters themselves, players are forced to fight the same battles again and again in the hope that maybe, this time, things will be different.