Ocean’s Heart is a simple action-adventure game at its core.  Developer Max Mraz brings a game that will feel very familiar to players, giving them a bow and arrow, bombs, a boomerang, and a trusty sword.  What stands out is that the game feels like a real archipelago, every place feels connected and the world feels like a giant intricate puzzle.  It is amazing to go exploring and see how much of the game’s key items and upgrades can be found in its hidden nooks and crannies.  All of this comes with a warm feeling from the exploration and the lighthearted and comical dialogue between characters.

The adventure follows Tilia, an apprentice volunteer navy member who is helping around her family’s tavern in her hometown of Limestone Island when it is attacked by pirates.  Blackbeard, the pirates’ leader, is searching for information on the Ocean’s Heart, a powerful stone that allows whomever wields it power over the seas.  Tilia’s father Mallow leaves immediately to bring these pirates to justice, while in the aftermath Tilia finds out her best friend Hazel was kidnapped.  After months have passed and no word from either of them has come back, the heroine hitches a ride on a boat to the nearest city to find them, leaving the tavern in her sister’s care.  Along the way, the player can fulfill duties as a member of the sparse volunteer navy, essentially an archipelago-wide guild, by helping townsfolk in new places with side-quests while searching for clues on Tilia’s family whereabouts.  Tilia is rarely thrilled at these side quests and approaches many of them with a dry wit and sarcastic charm.  NPC’s are a blast to talk to as many have quirks to them that makes it hard to resist cracking a smile at Tilia’s interactions with them. 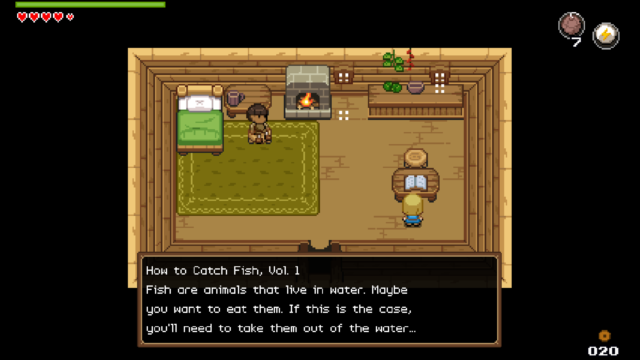 Every fisherman has to start somewhere.

The world is vast and begs to be explored as not every side-quest is easily marked.  Luckily the start of any given quest appears in the game’s quest log to easily reference so as not to get overwhelmed.  The game has an old-school feel at times.  For instance, a locked door may be found in one area that has no significance until a seemingly random cave half the archipelago over has a key and only a hint along the lines of “wonder where this key fits” appears in the quest log.  Not every quest is this difficult though, as multiple quests simply require a drop from a subsequent boss, or travel to a specific location.  There are a few hidden areas along the way that hold small power-ups or additional coins that can be easily missed.  Luckily, anything specifically needed for story progression is easier to find, taking away any stress of missing any of these hidden areas but always rewarding the player for exploring everywhere.

Tilia has a variety of weapons and abilities to use on her quest to find her family.  The sword, arrows, and bombs are improved with drops found in the world.  Spells that vary from lightning strikes to a barrier that reflects projectiles can be found to complement the game’s arsenal.  Tilia’s not just restricted to a sword; as a spear, a boomerang, and a ball-and-chain provide further options.  While the sword is tied to one button, the rest of the armory can be swapped in or out at any time from the menu and tied to two different buttons to provide flexibility in how the game handles.

Combat in the game is simple and intuitive once the player tests out a weapon a few times to make sure they get the timing of it down correctly.  There’s a small delay on the bow, bombs have a timer of a few seconds unless picked up and thrown, and the ball-and-chain keeps the player in place for a moment as it is swung around.  These attacks combine with the immediate arced sword slash and narrow spear thrust that affect objects directly in front of Tilia.  Also bound to a button is a forward somersault that allows the player to dodge incoming attacks and move around the map faster.  Fights themselves are easy and straightforward.  The game often gifts players recovery items, and if players dies in battle, they can opt to resurrect on the same map with almost full health.  In some instances it can be more strategic to die on purpose rather than spend the coin at the inn to restore full health. 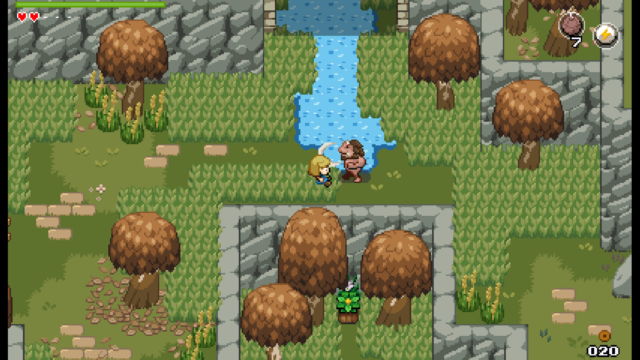 Just a lucky swing, that’s all.

Puzzles in Ocean’s Heart are not very difficult to figure out and often the hardest parts involve backtracking in a dungeon to get a key, or talking to an NPC to know what direction to head in next.  An example of this is opening a door in a dungeon with a key only to find another room needing a key in it, causing the player to backtrack to a different part of the dungeon, using a variety of weapons in non-combat situations, and cross a series of platforms to collect the next key.  Executing some parts of these puzzles however, is the most frustrating part of the game, as the controls to walk down a collapsing pathway are very strict.  If there is a ledge Tilia can fall from into an abyss or deep water, she will undoubtedly do so.  Precise movements are needed and even targets with the bow can be missed if proper aim is not taken.  These precise controls shadow the player everywhere they go, as forward roll and interacting with something is bound to the same button, so trying to talk to someone on the dock in a town can cause the player to roll into the ocean causing damage.  Damage-free movements can be difficult to learn, but even falling causes minor damage and with the ample recovery items the game provides it is just an itchy mosquito bite on this game’s lovely camping trip adventure.

The game’s graphics offer a great homage to old-school 16-bit action-adventures with meticulous sprite work.  Most NPCs have a unique look, with only some sprites reused for sitting bar patrons or fishermen.  Enemies shine since all have different sprites, making every one of them easily distinguishable at a glance.  Each town and area has a distinct feel and can be recalled by visual cues.  Musical ambience also shifts and fits in tone with the locale the player finds themselves in.  Staying in one area for too long will cause the background music to linger in the player’s mind but not in an annoying way.  Humming the town’s music while entering a nearby forest happened a few times.  Similarly in eerie locations the player finds tense music and thunder strikes to accompany their adventures in such areas.

Ocean’s Heart is a quirky action-adventure game with a lot of charm added in.  It is a breeze to play, but if the controls weren’t always so precise, it would be easy to fully immerse in this archipelago and see where the tides take Tilia.  Combat is simple but fun, puzzles are in the same boat, and the game puts an emphasis on exploration and adventure with an easy-learning curve.  Jumping in to the game to sail the seas searching for the next upgrade and for clues to what happened to Tilia’s family is an interconnected and wholesome endeavor, leaving the player plenty to enjoy and experience. 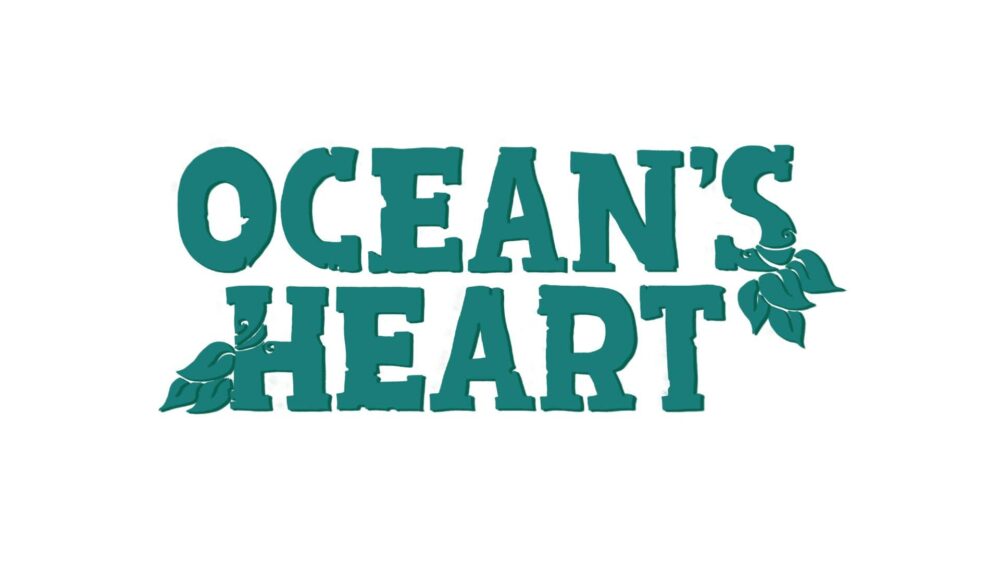