Some Magicians Just Want to Watch The World Burn

A witch, wand in hand, stands between two monoliths. The wind is blowing, and on the right there’s a cave that leads to monster-infested mines. Nolla Games’ Noita starts with the same premise at every playthrough, but the events that follow from there always vary in this procedurally-generated world. The game is a 2D roguelite that never explicitly states what motivates the purple-clad magician to explore the nearby depths. The main draw is instead learning from and experimenting with the multiple mechanics of Noita‘s gameplay, the cause of exciting triumphs but also of frustrating losses. It is a bit of a letdown that the scales seem to be tipped in favor of the latter due to how much weight is given to the luck factor, but it’s when the game nudges in the player’s favor that it truly starts to shine.

The main characteristic that sets Noita apart from other entries of the same genre is how the pixels are physically simulated, meaning that every pixel behaves differently depending on the material it represents. Explosions can tear through ground and stone, but the same can’t be said about metal structures. Fire melts ice into water, which can be further turned into steam that rises to the ceiling if a heat source is nearby. Each type of liquid comes with its own density, and will either stay afloat or settle below when mixed with water. Bathing in different liquids grants additional effects, like oil increasing the likelihood of catching fire, blood granting a higher chance of critical hits, or acid whittling away at the player’s health. These intricacies can develop into reaction chains that greatly alter the playground of each run right from the start. It is not unusual to find explosion craters or puddles of blood and corpses as the sole leftovers of events that transpired off-screen, which can sometimes cause sudden slowdowns due to the sheer amount of blasts and deaths that result from them. Learning how the different elements interact can also help in dispatching the enemies that roam the caves, but they rarely outdo the damage potential of wands, the game’s main weapons. 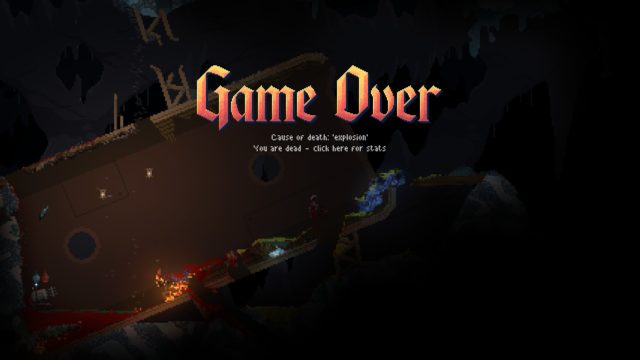 A view that will be burned into the player’s eyes after just a couple of hours.

Each new run gives players two basic wands, but more can be found while adventuring in order to widen the array of available spells. Every wand has different characteristics, such as the maximum amount of mana available or the number of spells that can be cast at the same time. But upon reaching the Holy Mountain, an area that acts as a safe room between one level and the next, wands find an added layer of depth. Here spells can be removed from or added to a given weapon in order to greatly alter its functionality and use. Damaging spells can produce bullets like bouncing energy balls and electric rays that can be combined with each other to discover unlikely synergies. There are also passive spell modifiers that change aspects like the bullet’s trajectory and speed, while others grant additional properties such as a freezing effect or fire trails. The Holy Mountain also gives a chance to buy either new wands or spells in exchange for gold, which is left by foes upon their death, as well as the choice between different perks, permanent bonuses that range from granting a projectile-deflecting shield to a friendly, spell-slinging ghost.

The best moments in Noita come from the interactions between these different gameplay elements. For example, gaining the explosion immunity perk gives the chance to fire nukes with impunity and live to see the aftermath, while being blessed with the invisibility perk turns Noita into a stealth game where the witch can walk past most enemies, provided she doesn’t touch any liquid that will give off her presence. The many different scenarios that can open up due to randomness can vary greatly and provide lots of fun, but it is a pity that the game seems a bit stingy in granting the appropriate toys to play with. It is not guaranteed that players will find any wand in the first place, and even then they may not come with interesting or synergic spells, especially in the starting areas. One of the major offenders is the chance of being unable to obtain a digging spell, a simple feature that becomes important for reaching otherwise inaccessible areas that house new weapons or health power-ups. Being blocked out from new potential sources of mayhem just because of bad luck isn’t rare, which makes the lack of a default digging option hurt much more. 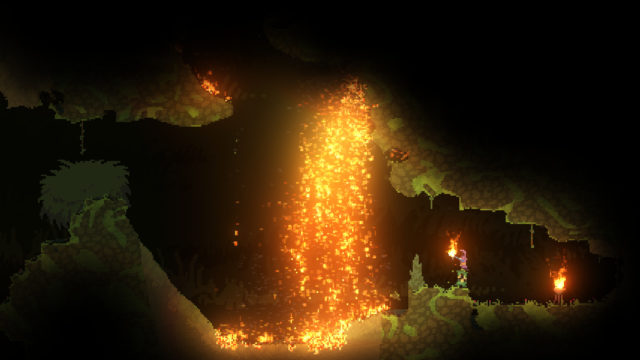 The environment can be destroyed in multiple ways, setting it on fire being only one of the available options.

Powerful spells are almost imperative in later parts of the game. Enemies get bigger health pools and more destructive attacks fast, and tend to quickly appear in bigger groups, so exploring the early levels for better weapons becomes a necessity. This can become a fruitless search at the RNG’s discretion, which can dictate the failure or success of a run from the get-go. The game then becomes less about making the most out of a player’s arsenal, but more about being allowed by luck to survive the onslaught of foes that start to ramp up in difficulty very quickly after the first couple of areas. Being showered in enemy bullets just after taking a bad turn with nothing but a peashooter acting as the only defence option is not an unusual occurence, and is as frustrating as being sniped by an enemy sitting outside the screen while being unable to move due to a single, hard-to-see pixel blocking your way, or encountering a fast, one-shotting monstrosity that lurked in the dark, waiting for the right opportunity to strike.

Dying puts the player back to the start, with nothing but a compendium of spell, perk and enemy descriptions as proof of past experiences. The game is punishing as-is but the presence of only a few ways to replenish the available health contributes to its difficulty even further, with mods being the only way to temper the experience if one feels in need of an easier time. Players who are looking for an even more brutal journey through the depths can unlock Nightmare mode by completing the game once, while the Daily Run mode puts the player in a random location with different starting equipment, and a Practice Run is also available for those who want to tinker from the get-go with the huge amount of tools available. 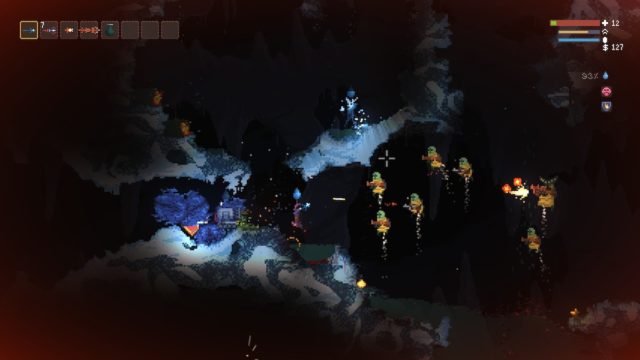 Hordes of enemies may lie in wait around every corner.

Surrounding the witch’s adventures is a world created in delightful pixel art. The different elemental reactions are convincingly recreated, aided by the sound design by Niilo Takalainen. The crackling fire burning through wood, muffled explosions, and trickling water convey effectively what may be happening in the witch’s surroundings. The game also features a dynamic soundtrack composed in collaboration with From Grotto: mellow tunes accompany calm exploration phases, while faster beats come into play during combat encounters. The Holy Mountain theme, for example, is a fitting backdrop for the strategic decisions that have to be taken in the safe room, and the multitude of instruments that gradually creep in as the witch gets hit by enemy bullets pull their weight in amping up the tension.

All in all, Noita‘s package is filled to the brim with content: the descending path down the caves is not the only available one, and multiple secrets are scattered all around the world, granting even more bizarre and wacky effects to experiment with. Even so, much of the fun derived from a playthrough feels more dependent on the luck of the draw rather than the player’s skill and knowledge of the game’s mechanics. A single run can end within minutes, but reaching the credits will likely take multiple tries and over twenty hours, with many more to come if one is set on discovering the multiple hidden mechanics and optional pieces of content. Noita is a challenging roguelite winking at those players who put freedom of exploration and experimentation in high regard, but the heavy reliance on RNG and a steep difficulty curve can hold back anyone from relishing in the chaos more often than not.