New Spin on an Old Classic

The story of Robin Hood needs no introduction thanks to various forms of literature, film, and TV series adapted from it. While the famous folk tale had some video games based on it in the ’80s and ’90s, there hasn’t really been a recent one up until now. Nocked! True Tales of Robin Hood sets out to fill this void in the form of a text-based interactive fiction RPG. First released on iOS devices in 2017, the Windows PC version expands the game with new art, music, and a greatly increased word count, creating a unique, if flawed, take on a well-trodden tale.

The first thing noticeable about Nocked! is the minimalist presentation. The art and music, done by Amanda Spaid and Ivan Oberholster respectively, convey a sense of ambiance, wonder, and even drama during key points of the story. The gorgeously drawn backgrounds also give the game a sense of place. Further contributing to the presentation style are character silhouettes — with Robin being displayed on the left side of the screen and whoever is currently conversing with them on the right — that show the general shape of the characters, leaving the rest to the imagination. These audiovisual aspects complement the written text without overshadowing it, making it the central part of the experience from beginning to end. 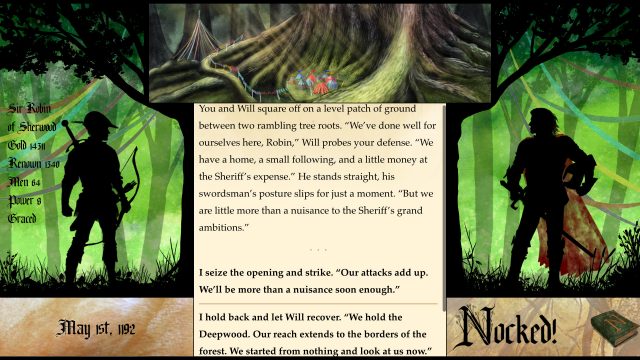 It is important for a warrior to train and keep their strength up.

Like all versions of Robin Hood, the story concerns the exploits of a rebellious outlaw who’s in conflict with the Sheriff of Nottingham and the corrupt Prince John. As expected, other characters from the folk tale like Marian, Little John, and Friar Tuck join Robin in their conflict. One of the first things that allows Nocked! to stand out from other takes on the folk tale is the option to play as either a male or a female Robin, which also comes with different romance options depending on chosen gender. The player can also pick between five different backstories that affect how other characters address Robin, which is just the tip of the iceberg of the choices that can be made.

There are three potential bases in Sherwood Forest to set up camp: a dragon’s cavern, an old fortress, and the branches of giant trees. Regardless of the chosen base, players will need to expand it in the fight against the Sheriff. They can accomplish this by using four different resources: gold, renown, men, and power. These can be used in various ways, such as sending men on missions, building defenses for the base, recruiting new men to join, and influencing different factions and hindering the Sheriff’s attempts to thwart Robin’s efforts. How these resources are spent will affect how well the rebellion holds up over time, in turn affecting Robin’s ability to expand the base. If things aren’t going well, the player will lose gold, renown, and men every season, meaning there will have less resources to use. Since there’s only a finite amount of resources, it’s important to pick and choose what they will be spent on.

The way in which the role-playing and resource management intermix with each other is the strongest aspect of Nocked!. For example, power is gained and can be spent to earn favor with the four different factions: the peasants, the church, the nobles, and the fae. Robin can either try to please all factions or focus on just one or two of them. Gaining enough favor with a faction will give the player influence with them, which, in turn, decreases Robin’s bounty and causes trouble for the Sheriff. 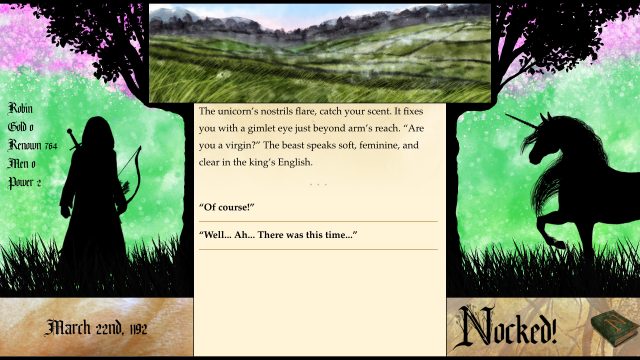 This unicorn doesn’t seem to know that it’s not appropriate to ask that question.

Once in a while, Robin can take their men to rob caravans of gold and other valuables by searching through the Deepwood, where they will have the choice between taking everything, taking only some of it, or allowing the potential targets to pass through without taking anything. Whatever choice is made can cause said targets to either become Robin’s ally or their enemy, which forces a decision on whether the additional gold is worth it.

Throughout the game, some scenarios occur where Robin and their men will face the Sheriff’s forces, requiring the player to make consequential choices. The player can use Grace — the blessing of God — to get the best possible outcome. However, Grace can only be used once per season in certain situations, meaning it’s best to save it for only the most dire of circumstances. Occasionally, Robin will be in a conflict or situation that requires keeping track of certain stats determining how well they or the rest of the group are doing. However, the stat tracking is tacked-on and superfluous, which is exacerbated by certain choices causing the numbers to change in often extreme and nonsensical ways. With the possible exception of one excursion at Nottingham Castle, these sections could have done without the use of stats without negatively affecting the gameplay one bit.

At the start of the game, players can choose between four difficulty options, which determine how easily resources are obtained. There’s no way to change the difficulty once it has been chosen unless the player is willing to restart the game from the beginning. The text size can also be adjusted at any time, making it convenient for those that feel more comfortable with larger fonts. 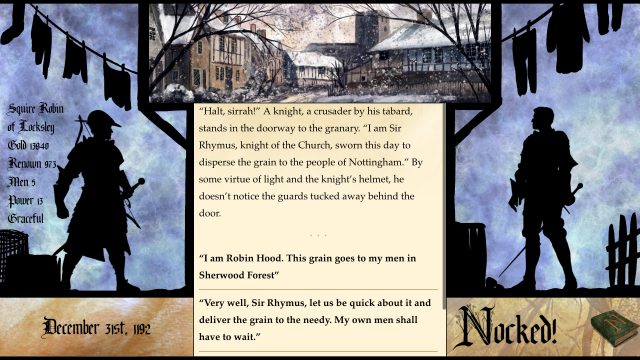 Choices like these are pretty common in this game.

Since the interactive fiction aspects are the most prominent parts of the game, the writing matters to the overall package, and it’s a mostly serviceable effort in this regard. The prose is strongest when it comes to describing the environmental details of the Sherwood Forest that, combined with the aforementioned minimalist presentation, does a good job of making the game effective as an atmospheric experience. In keeping with the folk tale nature of the source material, the characters fill out their archetypal roles well enough without developing much beyond them. Easily the biggest weakness in the writing are the occasional anachronisms of the setting, such as references to characters drinking coffee as well as a couple pop culture references in the dialogue choices. Even in context of the game’s historical fantasy version of late twelfth-century England, these anachronistic details are awkward at best and at times can make it difficult to take certain narrative events seriously, but thankfully this isn’t pervasive enough to overshadow the writing’s stronger points.

Having played Nocked! True Tales of Robin Hood for 42 hours across two playthroughs, I was engaged by the mixture of role-playing and resource management, along with the emphasis on the sense of community and cooperation needed to fight against a corrupt institution even when the odds felt overwhelming. The writing isn’t going to win too many awards, and I could’ve done without the unnecessary anachronisms, yet there was still some magic to be found in my journey through the Deepwood.