NEO: The World Ends with You Review

Take a Bow to the Moon

It took thirteen years, but Square Enix’s urban fantasy RPG The World Ends with You finally received its much deserved follow-up. NEO: The World Ends with You is almost exactly what one would hope for in a follow-up, and Square Enix and h.a.n.d. have done a fine job transposing the distinct gameplay of the original onto modern systems. Though there are a few weaker elements, primarily combat, they’re overridden by the audiovisual style and another engrossing tale and cast.

It first bears noting that though NEO: The World Ends with You brings in new protagonists and other major characters, it’s very much a sequel and it’s recommended that players are familiar with the events of The World Ends with You. Taking place three years after the first game, NEO’s main protagonist is high school student Rindo Kanade, who — along with his friend Tosai “Fret” Furesawa — is drawn into a new edition of the Reaper’s Game. This is a week-long competition for those who have recently died and takes place in a plane called the Underground, which semi-interacts with the real world and is home to Noise, hostile manifestations of negative emotions. Those who lose the Game are erased, while the winners get their wish granted.

This version of the Game is run by a new set of Reapers and has its players working in teams rather than just two-person partnerships. Fret elects to establish a new team, albeit under Rindo’s leadership, and the two soon manage to enlist fellow new player Nagi Usui and gain aid from the returning and enigmatic Sho Minamimoto as they spend the week learning about their situation and trying to survive. The Game is all about earning points, although the amount of points each team has is never stated, by accomplishing the goals sent to the participants’ phones at the start of each day. Fortunately, each member of the team has a special ability that helps accomplish these goals and overcome obstacles in the process: Fret can imprint memories into the populace while Nagi has the ability to dive into a person’s mind to let the party tackle the Noise within. Rindo’s is the most powerful one of all: the ability to turn back time to a point earlier in the day. 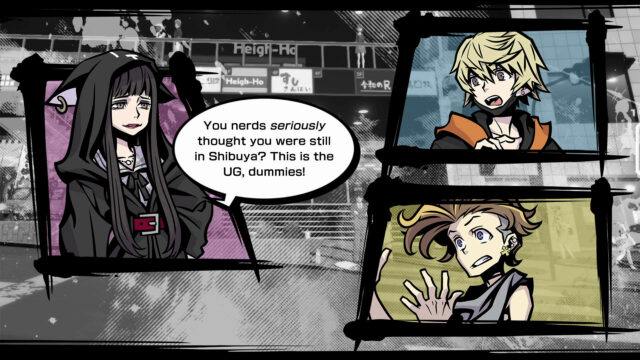 To be fair, it looks very much like Shibuya.

NEO: The World Ends with You shines brightest in its character interactions, which are a joy throughout. All of the different relationships and motivations have their own unique elements to them, and each character gets their own tics and quirks. It’s a fun cast filled with individual depth as well as plenty of development, and the writing and localisation are excellent. Though it needs a bit of deus ex machina in the process of getting there and some characters warrant much more screen time than they get considering their impact, it provides a very satisfying conclusion and successfully showcases how Rindo and his relationships develop over the course of the game. NEO: The World Ends with You provides an excellent conclusion to both games, though it naturally ensures there’s an option for the franchise to grow further in the future.

Takeharu Ishimoto returns for the soundtrack of NEO, and once again it’s brilliant. Featuring a wide array of songs covering multiple genres including hip-hop, pop, rock, and even metal, the soundtrack is addictive throughout and really builds up the vibrant Shibuya scene. The soundtrack was a huge part of what absorbed players into the original game, and it’s exactly the same here. It makes simply moving around Shibuya while listening to the beats perfectly enjoyable by itself. The English voice acting is another positive aspect and helps NEO build upon its predecessor as most of the returning characters didn’t get much voicing in the original game, and it’s great to hear them get additional opportunities to shine.

NEO: The World Ends with You works hard at moving from 2D to 3D while keeping the graphical style of the first game and the effort pays off. The game’s stylised version of Shibuya looks great and the same applies to Tetsuya Nomura’s sharp character designs. NEO retains its mixture of visual novel and comic/manga event scenes and uses them to great effect to showcase the writing with pleasingly emotive character portraits. There are a small number of 3D animated cutscenes for the biggest events, which do the job well enough without being impressive. 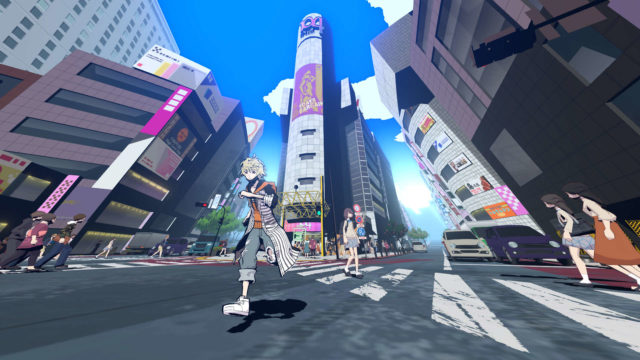 While much on the narrative and styling side is similar between the two games, NEO vastly changes up the combat system. Each party member equips a pin that is assigned to a particular button — Square, Triangle, L1, L2, R1, or R2 on the PlayStation 4 — and pressing (or holding) the relevant button activates that pin’s ability. Each pin can be used a certain amount before it needs to recharge. Combat is all about generating combos with these pins; hit an enemy enough with one pin and a “drop the beat” indicator will appear; strike the enemy with a different pin while this is up and the groove score will rise, letting players unleash special attacks once it reaches 100%. On top of this, players will need to move around and avoid enemy attacks with the help of a dodge button; while only the latest character activated is directly controlled, the rest will follow and dodge where possible.

The combat system is effective and it is more accessible than the first game’s touchscreen-based system. However, it comes at the cost of making it less distinctive and readily devolves into semi-structured button-mashing, especially if players have managed to establish a strong set of pins and other equipment. Individual enemy types behave in different manners and have abilities and combat styles that players will want to take note of and factor into their strategy, but there is a limited number of them. Tactics required end up being a straightforward matter of attacking in combos whenever possible and avoiding what attacks one can. Players can equip healing and defensive pins, but on the normal difficulty the number of battles where having one felt needed was minuscule, particularly when regenerative effects can be equipped elsewhere.

Players are given additional difficulty options and can reduce their level for greater challenges, with higher difficulties and reduced levels increasing the drop rate for rarer pins as a reward. There are also some specific challenge battles, associated with Nagi’s dives or special pig Noise, that provide a bit of extra challenge due to additional rules and modifiers. Despite these, combat gets repetitive and players will soon realise that unless they are actively hunting for pins, either new or ones that can be sold for cash, there’s not much benefit in getting involved in more battles than they really need to. Fortunately, enough additional content and party-building options exist to keep the gameplay otherwise engaging and give players some options to try and freshen combat by trying out new pins, which can be leveled up a certain amount and occasionally evolve into new ones. 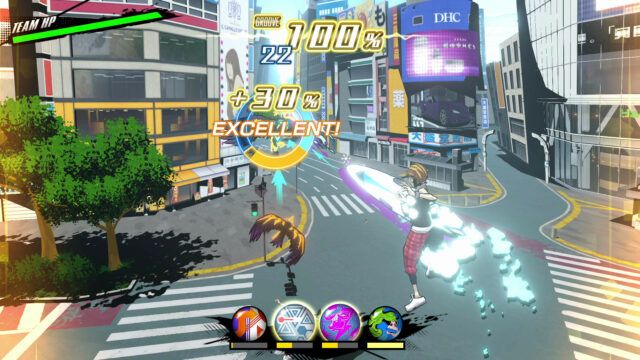 There are lots of pins to find with a solid variety of abilities.

Missions task players with moving between different parts of the city while overcoming obstacles, often literal barriers put up by Reapers. There are some basic puzzle elements, but these are ultimately trivial. The few story puzzles just require players explore for clues and select the correct options at the end or simply use one of the character’s abilities. Fret’s ability just asks players to move the two analogue sticks into specific positions, while Nagi’s brain dive results in a series of battles. Meanwhile, direct blockages are overcome by defeating Noise or some quick interaction with the party customisation elements. There are plenty of days on which Rindo has to rewind time and figure out what course of action he needs to take to stop a disastrous outcome. However, with the exception of one element where multiple conversation options need to be picked, there’s no thought required as it’s a linear process that is simply a matter of going to the indicated times and interacting with the relevant persons.

While the party has its own standard level raised by earning experience points, individual characters can have their stats upgraded in two main ways. The first is through their clothing, with five slots available. Each clothing item raises the character’s HP (which goes into a shared pool), attack, or defence, as well as provide a passive bonus that is activate if that character’s style points are high enough. Style is raised, along with the other stats, with the second upgrade option: food. Food and clothing can be found at restaurants and stores around Shibuya and cost money, which is earned by selling extraneous pins. Each character prefers different menu items, shown at the top of the screen with a reaction pose, and has a chance to get additional bonuses with orders they particularly like. However, players can’t just endlessly stuff their party, as once the fullness meter reaches 100% they’ll need to wait for it to empty before they can order anything else. 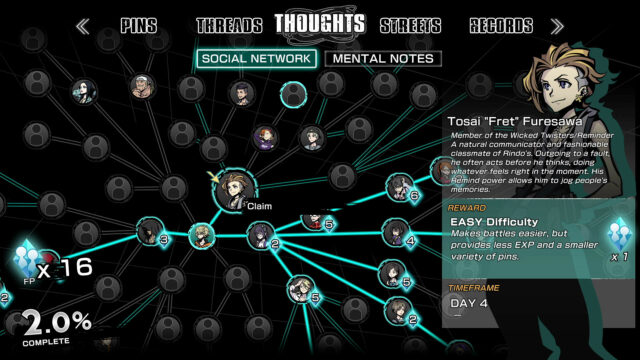 The social network works well with the other character growth options to make things engaging.

On top of this, Rindo builds up his own social network with all the characters he meets in the game. As he completes certain actions, he earns friendship points, which are spent on the nodes of his social network to obtain a variety of useful bonuses, upgrades, or items. NEO: The World Ends with You has lots of things for completionists to do. Players can freely go back to previous days in the story to collect anything they might have missed, and completing the game adds a special non-canonical Another Day episode on top of special secret reports that cast more light on certain story elements. Those who want to hang around Shibuya once the main story is completed at least have decent reasons to do so.

This year has already been a strong one for RPGs, and NEO: The World Ends with You just adds to that case. The opportunity to return to Square Enix’s take on Shibuya has been far too long coming, but now that it’s here, it’s immensely pleasing to say that NEO: The Worlds Ends with You does everything I was hoping. Despite some repetitive combat, the rest of the experience more than makes up for it, with the narrative, audio, and visuals combining excellently to make the game enthralling for the length of its forty-plus-hour runtime.