Nelke and the Legendary Alchemists: Ateliers of the New World Review

Last September I had the privilege to attend the Tokyo Game Show. I had a chance to go to Koei Tecmo’s booth and play Nelke and the Legendary Alchemists: Ateliers of the New World early, and the game showed a lot of promise. I think I got my hopes up a bit too high, because Nelke fails far more than it succeeds in its execution.

Players take on the role of Nelke, a young noblewoman in charge of revitalizing the village of Westwald and turning it into a metropolis. With her is her ninja handmaid, Misty, Knoss the village chief, and Lotos, a nobleman in charge of seeing that Nelke accomplishes her goals. Near Westwald lies a magical tree, and along the way, legendary alchemists from the past Atelier games appear and aid Nelke on her journey of self-discovery and town-revitalization.

Let’s start with some positives: there is nothing more fantastic than an anniversary game that manages to shoehorn in nearly every important character in a series, with characters ranging from the first Atelier game, Marie, all the way to the most recent title, Lydie & Suelle. What’s even better is that all of the characters interact with each other, and many of their storylines or personal journeys are fairly entertaining and sweet. When chatting with the legendary characters, even their theme music plays, which is such a delightful touch. 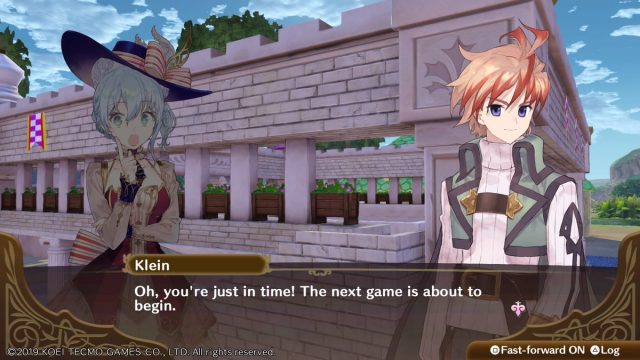 I will never understand Klein’s love of jumbo chess.

The main story, sadly, is lacking throughout. While Nelke has her own goals of becoming self-reliant and autonomous from her father who has appointed her to this role, it doesn’t provide the same drive or empathy that older games in the series offered in their storytelling. Some of the reveals are ridiculous, or come far too late within the game to truly matter, and those elements do hold Nelke’s story back in a lot of ways. There’s a lot of reliance on “and then the alchemists just appeared to help me!” and it offers nothing to players who potentially were hoping there would be more to the overall story as to why the alchemists would even want to help Nelke in the first place. The localization is at least partly at fault for this, as it’s fairly dry and doesn’t give the story any sense of urgency. A lot of the characters also lack parts of their personalities, though that also could be because there are so many of them to keep track of.

Nelke and the Legendary Alchemists has two driving gameplay mechanics at work. One is the town building simulator, where each weekday Nelke must build new ateliers, landmarks, production sites, and shops, all with their own unique bonuses. The goal in building these objects is to make revenue, while also increasing the town’s population. The second component is a holiday section, where Nelke can chat with the other characters, perform research with the alchemists to create new and improved items, or investigate new areas for ingredients.

The town building elements of the game are by far its best feature. There’s a surprising amount of flexibility in how players can develop Westwald. Making money and crafting items does take time, but it’s such an addictive process. On top of just ensuring that the alchemists are constantly crafting and stores are selling the highest-quality items, there are also Citizen Requests that provide extra cash and population bonuses, which are worth doing if the player can swing it. There are also random occurrences, which offer great bonuses but require the player to be sharp to succeed. Town building incorporates a ton of elements, and seeing how every area develops, and investigating the progress report at the end of the day to see how funds were allocated and who the working MVPs were is a lot of fun. Sometimes there’s almost too much that needs to be done, and yet it’s delightfully fun to feel the pressure and go at the workday grind again another day.

Then there are the holiday sections, which are a mixed bag. Visiting alchemists allows Nelke to build relationships and landmark with the alchemists. Choosing research allows Nelke and the alchemists to create gizmos and gadgets aplenty that can help progress the story, strengthen items, and help with town building. The conversations and research sections are wonderfully well thought out, though the time limit for how many things you can do in a day really does damper the overall enjoyment of the game. 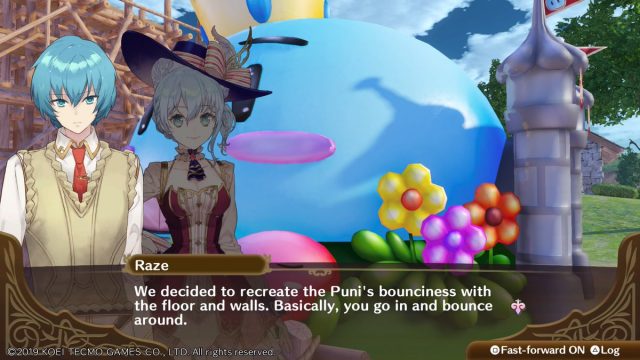 Worst is the game’s combat system, which is used for the investigation sections and easily its biggest flaw. It’s abundantly clear that combat for the majority of the game is a complete afterthought. Essentially, Nelke and her companions walk in a straight line from one end of the map to the other, sometimes collecting items or fighting battles. Battles are turn-based, where players can use up to five characters at once, each with a Burst Gauge that builds after each turn. Alchemist characters can do a super move after the Burst Gauge hits four out of five nodes, while offensive characters can attack, perform skills, or use items.

It’s so boring. So boring that players can scroll through their Twitter feed and not die during combat sections. Walk around, do battle, then walk some more is an example of a lack of creativity, creating a lack of engagement on the player’s part. There’s no incentive to want to grind or do the combat sections because they feel out of place to begin with. Even worse is that the Atelier series has had fantastic combat systems in the past, as evidenced by the Dusk subseries. What Nelke presents is an embarrassing attempt to shoehorn battle sections in that bore the player to tears.

Case in point is Nelke’s endgame, wherein the player basically grinds for thirty whole days, while the building portion continues on without any new goals to reach. Having thirty days to grind when the combat system offers nothing rewarding and is outright painful. A build-up to the end of the game should feel exciting and urgent, but since the combat and the story aren’t engaging, it ultimately feels like a sad slog to get to a very easy (and boring) final boss. 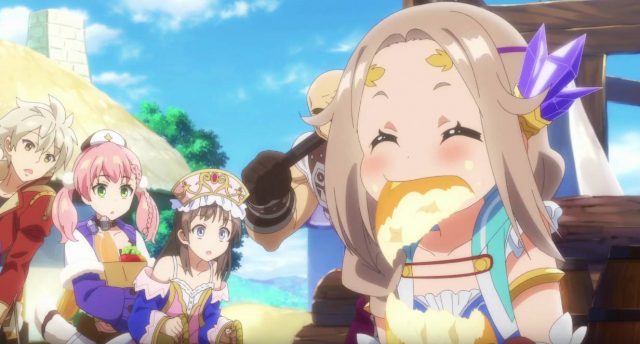 Firis: eater of the most traditional breads.

What’s even more difficult to discuss about Nelke is that it’s cheap-looking. For a game that celebrates a series’ twenty-year anniversary one would think that there would be some great bells and whistles. Instead, all the areas look very flat, some of the 3D textures look awkward, and overall it just feels like Gust wasn’t given enough of a budget to achieve the kind of aesthetic that it perhaps wanted. There are so many moments, especially when alchemists are performing their super moves, where no attempt has been made to even animate an object in, and instead players have to imagine what in the heck they could even be using. It really looks mediocre when compared to other games in the series.

The soundtrack is a saving grace in Nelke, as it’s twenty years of Atelier music throughout the game, and the original tracks are fairly wonderful to listen to as well. It was amazing to hear Klein’s theme from Atelier Iris when having Klein work in his atelier, or hearing Totori’s theme song when she’s having a conversation with other alchemists. These touches show at least an ounce of care went into the music.

Nelke and the Legendary Alchemists clocks in shy of thirty hours, though this time can vary a fair bit. One of Nelke’s more unique and interesting features is that, when players fail tasks, they are required to start the game over. By starting the game over, a lot carries into the new playthrough such as achievement bonuses, as well as the game’s encyclopedia. While friendship levels or money do not carry over, aspects such as production units and trade shop bonuses do, making it easier for players to build their towns and start the playthrough with a better sense of how to manage time and money. While it may seem irritating to have to restart over and over, the game offers the abilities to completely skip dialogue and events that have been previously unlocked, making the new playthrough move fairly swiftly. While it is tedious to have to start the game over, the playthrough zips by and the bonuses almost make up for it.

I loved working my way through first eight tasks of Nelke and the Legendary Alchemists of the World. For all my griping about the poor combat and cheap aesthetics, I won’t deny that I was completely addicted to the town building and alchemist interactions. It’s just hard to give Nelke a pass when there are games in this series that it could have borrowed elements from to truly make it shine. I don’t feel like Nelke was the best version of itself, especially when players are reminded that this cheaply made game doesn’t exemplify what makes the Atelier series great. Nelke lacks the spark and unfortunately reminded me that perhaps my love of the series has truly come to an end.