Only One Way To Go

Mystery Chronicle: One Way Heroics is not a typical RPG. While in the roguelike subgenre, it even does that differently. Two prior releases sharing the concept have been released on PC under the One Way Heroics moniker, but for this first console take on this title Spike Chunsoft has taken the reigns and provided an updated experience. It’s a fantastic pick-up-and-play title that’s perfectly at home on Vita while also available on PS4.

The story of One Way Heroics is quite simple. Players begin as a nameless hero who is tasked by a king to venture into the wild and find a way to stop the light that is encroaching upon the land. Along the way there are various NPCs to meet and villains to face, but most of it is fairly surface level. As the player completes the various endings more about the story is revealed, though even that is never too deep. That said, the story isn’t the draw here, so it serves its purpose well enough.

One Way Heroics has players focus on outrunning the Shine Raid and fighting the fallen angel Alma. Instead of roguelike dungeon exploration, players will constantly have to move to the right in order to stay ahead of the Shine Raid. In these areas are enemies, villages, items, and obstacles to overcome. Movement takes place in turn-based fashion, so there’s time to plan how to progress and either avoid enemies or work around obstructions. The areas are large enough to allow for a lot of vertical movement, with enemies, villages, items, and other obstacles such as lakes or mountains to overcome. 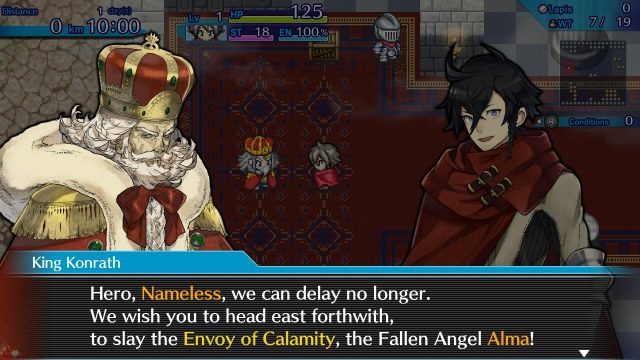 The story might be slight, but it’s still fun.

The player’s character has stats based the chosen class, and while there are only a few to start with like Knight and Archer, more options open up as it goes on such as Ultimate Student (from Danganronpa) and Wanderer (from Shiren) among others. When the player dies, it’s back to the start to create a new character. Points are earned in each successful or failed attempt which can be used in the Genesis Room to unlock new perks, classes, and special features. At the end of each run, players can access the Dream Vault where it’s possible to save a few items to use on the next character run. With these items and new perks and classes, additional playthroughs are more manageable.

Combat itself is pretty straightforward, as characters simply exchange blows with enemies around them in turn-based fashion, though it can be overwhelming when hordes surround the player. Positioning is key, and so are skills that can help alleviate problems. For example, Awakening can be used five times in a run and allows players to take three turns without anything else happening. Items and weapons are found throughout the world, either on the ground, dropped by enemies, or available from merchants. Each world is randomly generated, so where these appear and what they are will vary each time.

Easy mode gives players an extra item carrying bonus and the boss shows up after a short venture through the world. Normal does away with the bonus and the boss can show up at any time randomly, meaning the further you go the stronger you’ll get, but the risk is higher. Hard mode is the toughest, as enemies get stronger much faster, though the rewards can be greater. The game has different endings that vary depending on difficulty and other untold requirements, so it’s best played in bursts. 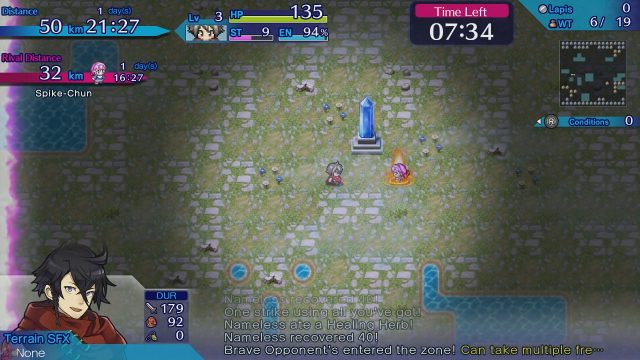 A dangerous world lies ahead.

The graphics have a lovely retro-sprite style that fits One Way Heroics perfectly, much like classic RPGs. Characters and enemies are tiny on the screen, but it’s easy to see what’s going on and manage foes. When nighttime hits or there is fog, vision is limited, but that’s part of the challenge. It’s a simple style, but everything comes together to work well in service of gameplay.

One Way Heroics is not for everyone, but it’s been one of the most accessible roguelikes I’ve played and that’s because it’s far from a traditional one. It’s not a game where players are punished for dying, but one where it’s a benefit to do so. Play sessions can be short, so even losses aren’t a waste of time. It helps that on longer runs there are occasional save options mid-run, but even those are strategic in their use. It’s a solid experience that might not be one people ever finish, but getting the first ending isn’t too tough. The others will take learning and patience, but are doable over time. One Way Heroics is a good long-term experience, albeit one best played in sprints rather than as a single marathon.