The Souls formula is alive and well if the number of recent imitators is anything to go by. Not a month goes by were there isn’t a game released with a pitch of “like Dark Souls, but…”. Many of these titles fail to capture the essence of what makes FromSoftware’s flagship franchise the memorable and engaging experiences that they are, instead choosing to focus on individual elements. Ignoring that it’s the blending combat, exploration, mystery, and player agency that make the Souls series work, these games too often try to double-down on combat without the structural support of the rest of the game to hold it up. But with Mortal Shell, developer Cold Symmetry may have put together a game that, while not matching scale or variety of a Souls game, can match its spirit.

The story in Mortal Shell is thin, but begins with players waking up in the misty, desolate world of Fallgrim as a faceless, alien-looking humanoid thing. Guided by nothing more than vague visions and the murmuring of a trapped giant known as the Old Prisoner, the player must find Glands wielded by powerful foes, release the giant, and hope this is enough ascend to the world above. The game’s purgatory metaphor is fairly on the nose, but the way Mortal Shell divvies out information is where its Souls influence is at its strongest. NPCs offer cryptic and unclear dialogue, stone slabs impart small snippets of information on the current area, and loading screens give brief item descriptions. The game can lean too heavily in this direction, offering few firm details to grasp on to. But as a means of setting the mood, it’s effective. 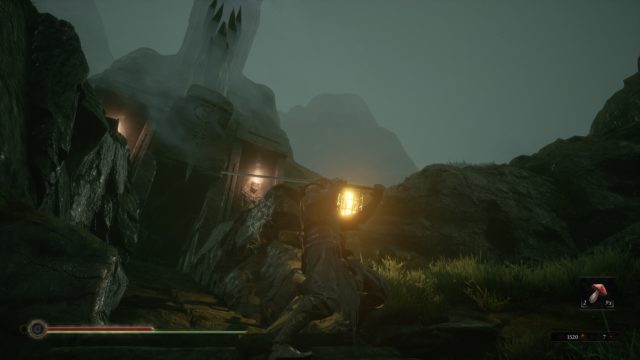 Mortal Shell has a lot to offer in the creepy environment department.

The world of Mortal Shell is set up as a hub and spokes, with each spoke being a unique area that function as the game’s dungeons. The hub world is a swampy marsh, filled with twisting paths and winding tunnels. Initially daunting, the small size of the game means that the hub is quickly mastered while also allowing for every nook explored to offer something of value. And despite its size, the process of mentally mapping the hub is incredibly satisfying. By contrast, the spokes themselves are a lot more linear, though still providing some opportunities to go off the beaten path. These areas also offer a much-needed change of scenery. The only real issue comes after defeating the boss of an area; instead of being transported back to the entrance of a dungeon, players must run back through the whole thing with new enemies placed. Given the game’s short length, this is the most obvious example of padding there is and it doesn’t help the experience.

Combat is quite the standout feature, including one interesting wrinkle it adds to the formula. Shoulder buttons and triggers provide light and heavy attacks, parries, and hardening, the game’s one new concept that feels genuinely expansive. By holding down the button, the character will solidify themselves and completely prevent the damage from the next attack while doing so, often causing the attacker to reel back. The biggest help is that players can harden at any time, including mid-way through an attack, so it becomes a natural part of using combos and helping prevent them being interrupted. It’s a welcome addition to the genre’s defensive repertoire while also giving the player more opportunities to be offensive. To prevent overuse, Hardening is on a cooldown — in addition, there are consumable items that can provide it with additional effects, such as healing the amount of damage that would have been taken or restoring resolve. These items are in limited supply so rarely get much use in regular combat, but can provide an edge in critical fights. 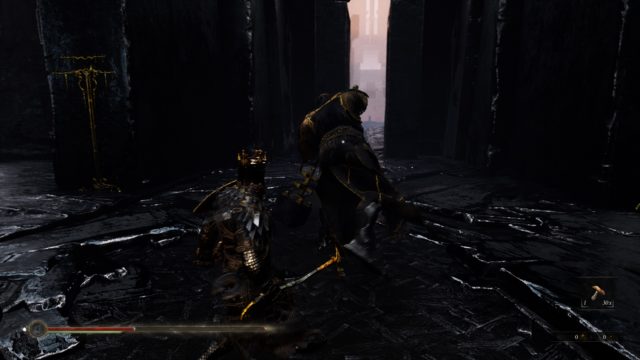 That hammer may look like it will hurt, but this guy can turn into a rock at will.

The game lacks any form of traditional character creation. Rather, the weird humanoid alien the player controls possesses fallen soldiers found around the world. Called shells, the four to find in the game roughly translate to different classes, each coming with varying degrees of health, stamina, and resolve, the resource used to activate special abilities of weapons. These shells have unique skills to unlock, but the options for customization are slim. There are only a few abilities on each shell and three of them are shared; annoyingly, these have to be unlocked for each shell individually. Mortal Shell is a rather short game and experience isn’t shared between shells, so it is unlikely that all of the abilities will be unlocked on a single playthrough without significant grinding. This doesn’t feel like a deal-breaker, since most of the abilities are passive and generally serve to further differentiate the shells, but it does mean that there is not a lot of mechanical depth to be found to the RPG elements. The game’s four weapons can be used with any shell and play very differently, but their progression is straightforward as well. At least unlocking them is entertaining, as each is guarded behind a boss fight where an enemy using the weapon must be defeated.

The difficulty starts off challenging, but as more shells and weapons are unlocked and more familiarity with hardening is gained the game becomes quite manageable. Given its free-form nature, allowing players to tackle the dungeons in any order, there are no major difficulty spikes. Bosses are unique challenges, but none are overwhelmingly difficult and basic command of the game’s systems should be enough to get through any of them with little trouble. The game does end on a flat note as the final boss is easily the weakest, but its a small mark against an otherwise solid outing. It should be noted that while its unlikely to fully upgrade all the shells, most of the game will be explored in a single playthrough and there is little to offer in terms of new things to uncover on repeated playthroughs. 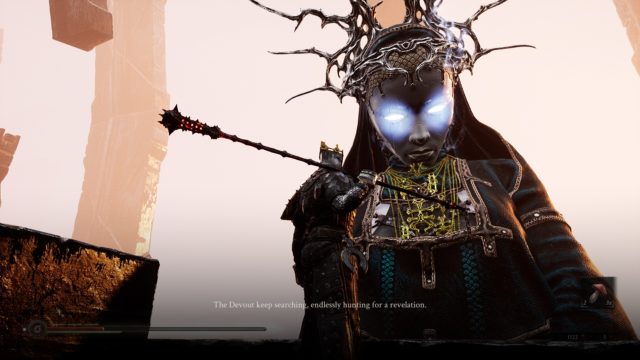 Believe it or not, she’s on your side.

Visually, the game shines in its art direction. While the game is an obvious budget title, Cold Symmetry makes the best of it and create some rather breathtaking environments. The Seat of Infinity is particularly memorable, presenting a grand temple that is slowly being torn apart by the temporal forces. Aurally, the sound design is striking but the score is minimal. Again following in Souls tradition, most of the game is absent a soundtrack. The times it is used the music made little impact to the point where the game almost feels like it doesn’t have a soundtrack at all.

Mortal Shell may be a modest product, but it surprised at nearly every turn with regularity. The lack of variety in the environments, weapons, and classes are more than made up by never overstaying its welcome. Whenever it feels as though its about to become stale, players will stumble across something new to try out. The lack of depth isn’t too much of a detriment as the game is short enough to ever feel tired. Better yet, what is there is good, a foundation with easy room to be expanded upon and a strong demonstration of Cold Symmetry’s understanding of core concepts that are the strength of the genre. Mortal Shell is a exemplary use of limited resources to make a tight, fun game, even if it only takes a weekend to beat.