Moonfall Ultimate aspires to be a reliable hack and slash affair, something that it does an at-best adequate job of realizing. It’s far from the best option for filling this niche though, due to a host of issues that aren’t all intentional. I enjoyed a few fitful moments of the game before suddenly completing it and being glad it was done.  Among the possible recommendation categories, this is not a particularly high one.

After selecting from one of three classes, the player dives into the game immediately. Characters in the beginning have access to no skills and must simply attack enemies to bring them down, using a single melee strike that is the same for every class. Exiting a room requires eliminating all the adversaries within range, something that will be performed many times before completion. Skills do make a significant difference in how the player fights, but they also drain the MP gauge and cannot be used exclusively. Once MP is gone, the player must use the single melee attack common to all classes until the pool has regenerated enough to cast something else.  Each class has four main skills to develop that focus on such things as ranged attacks and inflicting temporary status ailments upon adversaries, at least until the MP pool is depleted.  Running away isn’t an option in most scenarios since the melee enemies are about as fast as the player and will relentlessly pursue, usually while a couple of ranged opponents pelt the player from afar. 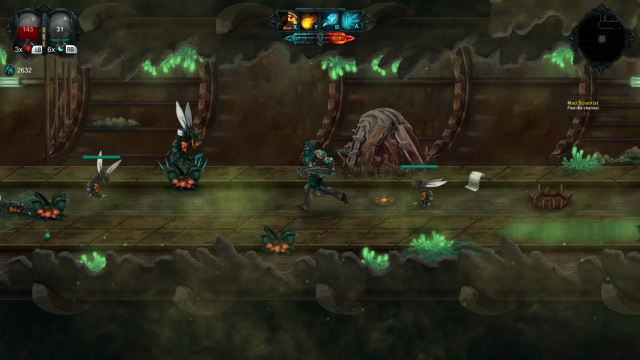 A sewer level where gigantic insects hatch and are out for blood, how splendid!

Combat satisfies a basic reptilian brain function desire to smack things repeatedly, but not much more. Fighting gets to feel monotonous after using the same procedure against most adversaries, though at least the abilities unique to each class do mix things up noticeably.  Particularly irritating are the numerous traps to be found on the screen, none of which affect the enemies and instead exclusively damage or snare the player. A few later environments introduce the unwelcome element of foreground decorations that obstruct the player’s vision, but otherwise a dearth of visual variety contributes to the samey feeling.

Consulting the map in order to divine where to go is a frequent occurrence, and it fortunately can be brought up whenever the player wishes. The difficulty stems not so much from labyrinthine areas as it does because the environments have exits that are hard to pick out from scenery. Aside from bringing up the map, opening the menu also allows efficient inventory and skill selection.  It even allows players to change the current skills by reassigning points at any time.

While it is possible to exit a mission at any time, doing so requires the player to start all over again, including the erasure of whatever experience and money was obtained in the abortive endeavor. There are no optional missions to attempt, and a few rooms which presumably lead toward additional spoils are inaccessible. The final mission is partially glitched on Steam in that its description is that of the previous scenario, and no additional text going into what is currently happening becomes available. Text found in messages during missions is also surprisingly small, adding another technical issue to the package. 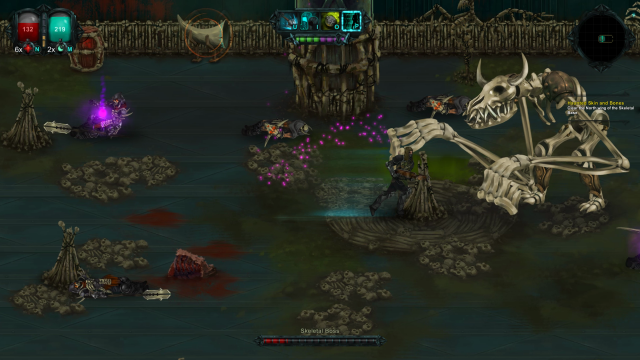 It may look like a cow skeleton, but it’s much meaner than most bovine types.

Moonfall Ultimate contains the bare essentials of a narrative, but aside from an opening cinematic detailing a quick history of the world, it isn’t expanded upon. The player takes the role of a soldier going forth to fight back against forces seeking to deconstruct a stable Empire. This premise will not be elaborated upon during the rest of the game, with occasional hints of more interesting happenings coming solely from the mission details.

Environments and adversaries look rather nice at first glance, and indeed the appealing art style is engaging. It becomes apparent after a little time that there aren’t many varieties of scenery to behold, and the shift to a green-hued indoor location after multiple outdoor environs dominated by brown is a welcome relief until it also becomes overly familiar. Bosses sport intricate animation that is worth beholding, but regular adversaries are repeated often enough that the novelty wears off for their visual appeal. As for the audio, Moonfall Ultimate‘s soundtrack is workmanlike background material that rarely draws attention from the player while its sound effects are solid but unremarkable.

It took me about five hours to reach the final mission of Moonfall Ultimate, only to be confronted with what appeared to be a glitched set of mission instructions at the end. I tried going through the game again using a different class, and encountered the same glitch, except this time I ignored the text and just plowed through everything as best I could. There are plenty of hack and slash titles available, and this one doesn’t stand out in any particularly positive way.