The Best Rises to the Top

Many RPGamers do not know that Capcom has two teams that work on Monster Hunter games. While one focuses on the next main-console release, the other team develops handheld titles. Created by the latter team, Monster Hunter Rise seeks to appease fans of the more classic on-the-go experience while also pleasing newer hunters who fell in love with 2018’s Monster Hunter: World. While a few missed opportunities exist, Monster Hunter Rise does a fine job of achieving both goals with a great co-op experience that moves the franchise forward.

In this iteration of the Monster Hunter franchise, RPGamers take up the role of a hunter who lives in the village of Kamura. Every so often, monsters rampage through the area, with the last attack nearly wiping out the town. Since then, everyone has been working hard to prepare for the next attack. As Kamura’s only active, licensed hunter of monsters, players are tasked with taking point in stemming the upcoming tide of ferocious beasts. However, they do have the option of joining up with three other players, in addition to hunting solo with a couple of animal hunting buddies (palamutes and palicos).

Graphically, Monster Hunter Rise utilizes Capcom’s RE Engine to great effect. The large environments have plenty of details and moving elements. While not comparable with Monster Hunter: World, this new title looks quite impressive on the Nintendo Switch. More importantly, it maintains a steady framerate even while there are numerous players, monsters, pets, and animation effects all going off at the same time.

Returning RPGamers will enjoy that Capcom did a better job with weapon designs this time around. Each of the fourteen weapons has well over a dozen distinct designs which are taken from classic games as well as new entries. They range from zany to downright terrifying. The Khezu weapons in particular look like the stuff found in nightmares. The design for the town of Kamura takes inspiration from Japanese architecture, with great attention to detail. Nature entwines with man-made structures to create a welcoming home every hunter looks forward to returning to. 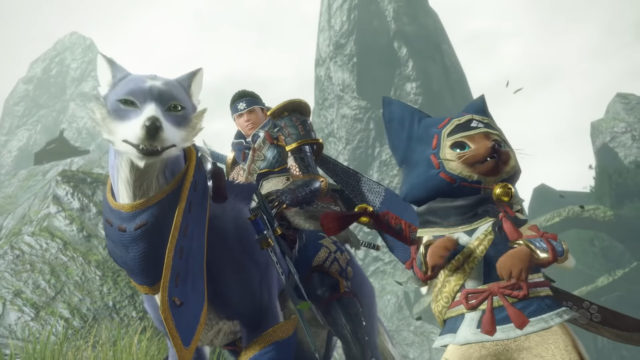 A new canine partner will help you take down your foes.

The sound design holds up its end as well. The soothing songs in town help to enhance the relaxing environment with great Japanese vocals. While exploring the lands, beautiful background music complements the experience. These songs change to an appropriate battle track once a fight ensues, with some monsters having their very own selection. The sounds of the monsters and weapons during the fight help inform the player when chaos breaks out. These audible cues feel very well done and really draw the player into the experience. The only detraction tends to be the incessant chatter from the hunters themselves. A new addition in Rise, the characters often yell out at various times, such as when a monster prepares a devastating attack. It can be grating as they often state, in unison, obvious actions the monster takes. Thankfully, these can be decreased or turned off in the settings.

Given that Monster Hunter games focus on slaying the titular creatures, variety plays a key role. Monster Hunter Rise not only features more monsters than previous titles, but pulls from each of the major entries in the franchise while adding over a dozen new ones. Hunters will face off against classic monsters such as Diablos and Rathalos, relatively fresh entrants from World such as Pukei-Pukei and Anjanath, and newcomers such as the lumbering behemoth, Tetranadon, and the particularly aggressive Magnamalo. The lineup helps keep things entertaining throughout the experience despite the current lack of an interesting end game system, or final encounters.

At the center of it all, the combat system shines. Once again, the monsters are a big reason why. Capcom paid incredible attention to how they are rendered, as well as how they move and act. Each encounter feels like the hunter engaging with a ferocious beast that wants nothing more than to turn the hunter into its next meal. Each one also has mannerisms and tells that indicate the monster’s next attack and learning these helps immensely with tougher encounters. The cycle of taking these behemoths down, crafting them into upgraded, fashionable armor, and using that to take on more ferocious beasts never gets old.

To tackle these forces of nature, hunters choose from a large variety of weapon types. Capcom continues to fine-tune each of these weapons to the point where they all feel great in battle. Using the hammer to bash a monster and send it reeling never gets old. With the insect glaive, hunters can jump great distances and take the fight to enemies who insist on flying. The bow retains the excellent changes made to its gameplay in World, allowing players to quickly dodge enemy attacks while powering up their next shot. The action remains exciting with plenty of variety between monsters and weapons to keep RPGamers engaged for hundreds of hours. 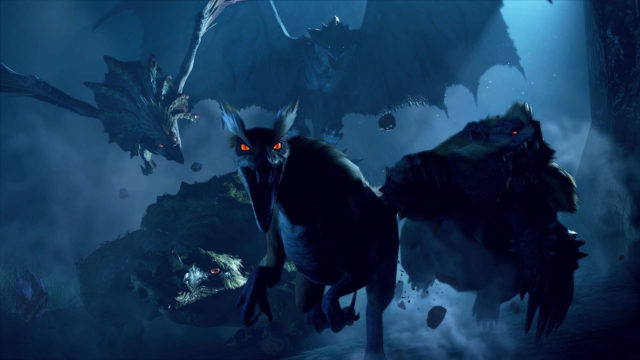 Creatures of the dark await you.

Yet, the developers decided to take the action up a notch with the addition of the Wirebug mechanic. Hunters can throw a bug into the air, which acts as an anchor point to attach a wire to. The end effect has the hunter slinging around the battlefield similar to Spider-Man. While this bears some resemblance to Monster Hunter World: Iceborne’s Clutch Claw, it features superior mobility and utility. Hunters can use the Wirebug to transverse quickly around the mob, get up high mountains, and pull off specialized maneuvers against the monster, depending on the weapon. When knocked through the air, players can use the Wirebug to regain control and land on their feet. While it takes some practice to master, the Wirebug really deepens the great gameplay the series is known for. The mechanic allows for easier vertical mobility, which really enhances exploration. The one potential downside to the Wirebug is that plays a part in making Rise feel like an easier experience compared to prior entries alongside the balance and speed of combat. However, the Wirebug ultimately facilitates hunts and is a welcome addition.

All of this comes together to create an exciting, faster hunting experience not found anywhere else. The thrill of properly dodging a vicious monster’s attack is accentuated by the smooth animation and special effects. Returning the favor and knocking the monster back with a powerful blow feels extremely satisfying. Chopping off the troublesome tail of a Rathian to limit its reach never gets old. Everything from the controls, to the kinetic feel of the weapons contributes to create an unparalleled hunting experience. While a blast to hunt alone, coordinating with a group of friends only adds to the excitement and gratification of hunting these creatures.

Monster Hunter Rise offers several ways to hunt. A single-player questline gives newer players a way to ease into low-rank fights, without the pressures of multiplayer. With nearly 40 hours of content on their own, these quests will eventually take participants through nearly all of Rise’s five dozen monsters while unlocking new gear, weapons, and town services. For example, hunters will unlock the ability to send their hunting buddies overseas to obtain reagents and goods to help in future hunts.

The primary way to enjoy Rise, however, is the hub, where one can join with friends or other hunters on a separate list of quests going through high rank. It offers its own line of quests that takes palyers through low-rank and high-rank fights, where monsters fight harder and faster. Unlike earlier handheld titles, Rise adjusts the difficulty of hub quests based on the number of players actively involved in the hunt. However, when four hunters, each with a Palamute or Palico, divide the monster’s attention, encounters are significantly easier. Therefore, experienced players can expect a more satisfying challenge when taking on a monster solo, or with a single friend. 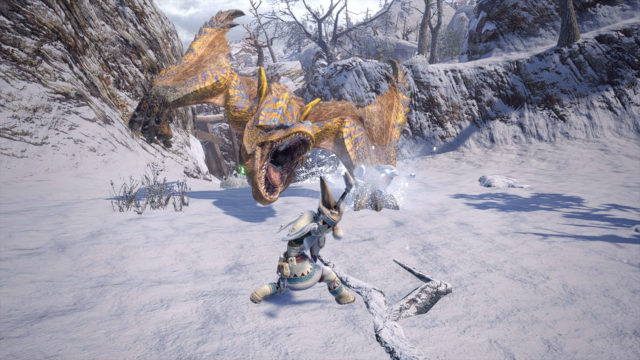 Don’t make the Tigrex angry. You wouldn’t like him when he’s angry.

Along those lines, arena matches return, allowing players to partner up with a friend to challenge a monster and compare your completion time with other hunters. These matches require one to choose between five sets of pre-selected gear, to help ensure fairness. Getting an ‘S’ rank in these matches requires skill, and provides a nice break from the standard hunt. Finally, rampage quests feature fights against waves of larger monsters with the assistance of siege machines. Hunters can raise up ballasts, cannons, and various traps to help slow down the horde lest they break the gate into the town.

Most of the quality-of-life improvements from World make their way into Rise, including the ability to join a friend’s quest in progress. Thankfully since cutscenes happen at the beginning of a hunt, other players no longer have to wait minutes to join. Wishlists make a return as well, helping hunters to keep track of what must be gathered to make that fancy new weapon. Players can eat, change equipment and restock at their camps during a hunt, as well.

However, Rise does miss a few opportunities. Solo players may feel let down after World, which offered both low-rank and high-rank quests out of the gate for balanced solo play. In Rise, village quests stop at low-rank, after which solo players only have high-rank options via the hub quests. As a result, the jump in difficulty and duration of hunts between the two ends up being quite the leap. Where a village quest or a four-player hub hunt may take 10-15 minutes, the same hub quest can take 25-30 minutes when challenged solo. This feels like a significant step back from World, which provided a seamless single-player progression through high-rank. Rise also lacks investigations, randomized quests with unique rewards found in Monster Hunter: World and Monster Hunter 4 Ultimate.

Despite these minor hiccups, Monster Hunter Rise is an epic experience that no Switch owner should be without. It manages to reach the vast majority of high expectations of both long-time fans and newcomers alike, and even pushes those boundaries with the exceptionally fun Wirebug mechanic and a superb cast of old and new monsters. While small room for improvement still exists, Rise continues to refine the formula even further giving RPGamers a hunting experience that can only be compared to other entries in the same franchise. And while veteran hunters will certainly enjoy everything Rise offers, newcomers will find that Rise provides a more welcoming experience than any other game in the series. Coupled with the Switch’s ability to play on-the-go, Monster Hunter Rise retains its Master Rank in the arena of co-op action RPGs. 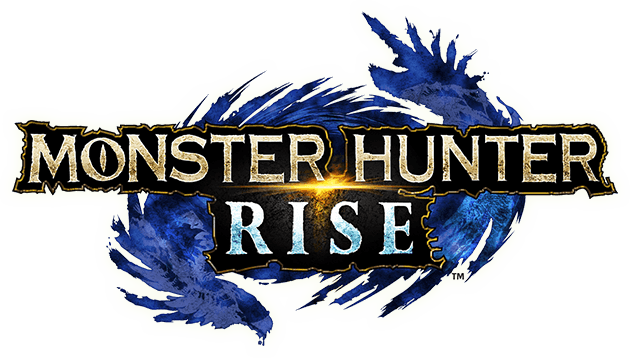