Metal Max Xeno: Reborn is an oddity, coming from a long-running series that has seldom seen games released outside of Japan, with only two games hitting the US before the release of Reborn. It is neither a port nor remaster of Metal Max Xeno, released for the PlayStation 4 and Vita in 2018. Instead, it is more accurate to describe Reborn as a reboot or remake of Xeno. While the game claims to provide an improved graphical presentation and more engaging battle mechanics than its’ predecessor, the story has been gutted with the bulk left on the cutting room floor. Ultimately, Reborn is a game that breaks just as much as it fixes.

The game introduces players to Talis, a lone monster hunter with a robotic arm, as he awakens in the desert. The world has been reduced to a mostly barren wasteland known as Dystokyo after a global event involving an AI supercomputer destroying humanity in order to save the planet. Players quickly acquire a tank, the primary vehicle for combat in the series, before arriving at the Iron Base,  which is the last bastion of humanity and serves as the main hub throughout the game. Lurking outside of the Iron Base is the Catastropus, a super monster intent on destroying the base, and humanity with it. Talis is able to challenge this final boss right at the onset, although chances of success are exceedingly low. Instead, Talis will need to explore the wasteland to amass weapons, tanks, and party members in order to make a decent showing against the harbinger of doom.

Reborn eschews the bulk of the plot of the original title and instead opts to provide a threadbare story through the framing of a sandbox game. The characters are the same from Xeno, but the characterization of most of them is opaque, with scant references to underlying motivations or goals. While some exposition is provided, it is usually secondary to exchanges of little value between the characters. Players eager to explore and battle giant mutant mechabeasts are not going to mind these middling exchanges; however, there is a constant sense that something is missing from the stilted interaction and ineffective character development that occurs through the game. Even without playing the original title, it is clear there are complete chunks of narrative and character interaction removed wholesale. If the developers were intending to clarify the story of the original title, they have not succeeded here. 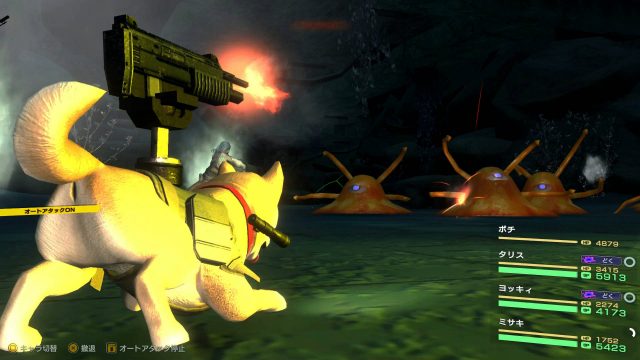 This adorable, gun-wielding dog is a party member.

After an initial starter battle against some nuclear ants, players are given free rein to explore Dystokyo at their leisure. Initially, this sense of freedom can be overwhelming, especially upon realizing overpowered enemies are frequently lurking just around the corner. However, as Talis continues to explore, numerous fast travel locations are unlocked, which provides motivation to continue an oft-perilous trek through the dunes, if only to unlock the next zone. This is essentially the core gameplay loop, as players leave the Iron Base to reach new locations while collecting equipment and engaging in battles on the way. Savvy players will encounter secret locations or dungeons at the onset, yielding powerful weapons or upgrades for tanks. As Talis and his cohorts push through the map and neutralize larger bosses, humanity’s extinction meter begins to deplete, indicating Talis is progressing on his mission to save the remnants of humanity.

Unfortunately, it does not appear there is much left of humanity — or anything else. Aside from the Iron Base, players will seldom encounter other characters while traversing Dystokyo. Worse, the game world itself is sparse, peppered with debris, monsters, and little else. Given that it is possible to attempt the game’s main objective of defeating the final boss within the game’s opening minutes and there are never any surprise revelations or plot twists after this initial setup, the story is quite linear. Along the way, the number of sidequests completed, tanks discovered, and characters recruited is up to the player. There are a number of alternate endings involving different characters but they keep in line with the zany spirit of the game, and are abrupt with no context or explanation.

Reborn features a turn-based combat system that is designed with vehicular combat in mind, allowing players to control individual party members on foot or in their vehicle. While players are free to — and in some instances, required to — engage in combat on foot, the bulk of challenging encounters should be faced from the relative safety of a well-equipped tank. Although the game provides Talis with his first tank, it is up to players to discover the rest. Once obtained, players are able to customize the tanks with various weapon types, including options for elemental and ballistic attacks. There are plenty of battle mechanics, but in action it is hardly nuanced. Individual characters have skill trees which are filled with techniques for battle, exploration, or competency with tanks. While Talis and his crew have weapons, significantly more effort and money are expended on tank management. Each tank has a maximum weight which must be accounted for when determining the type of artillery to equip based on blast type, elemental attribute, or other characteristics. Most enemy encounters essentially boil down to exploiting enemy weaknesses, so players should expect to budget for the expansive and expensive chore of tank management. Outfitting tanks can be fun, but navigating through the bulk of these systems can feel unduly burdensome at times, especially when low on cash. 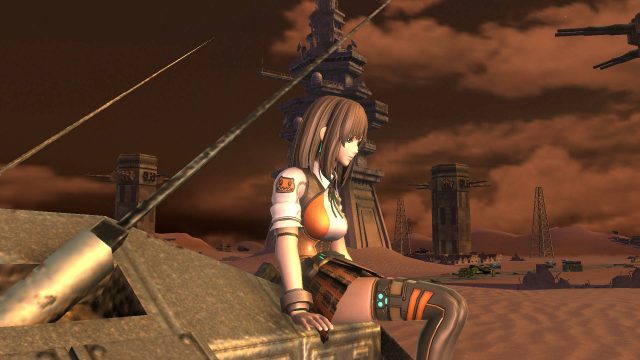 Hope you aren’t expecting to learn her backstory.

Ordinary battles are triggered after being spotted by enemies, and players can attempt to execute a first shot or run away. Run-of-the-mill encounters typically do not require much skill, with enemies that can be dispatched with a single preemptive strike. While units are able to move around in real time, it appears to make very little difference as it is next to impossible to utilize cover or otherwise dodge incoming attacks. Instead of avoidance tactics, the true focus is on unloading your artillery as fast as possible to finish the encounter.

In order to advance through the game, Talis needs money for necessary tank upgrades. The easiest way to amass money to finance these pricey upgrades is to take out WANTED monsters, which are wildly unbalanced elite monster hunts. Players are expressly told to avoid the first one found within the opening hours, and then quickly ambushed by the discovery of another. It’s frustrating to run into these monsters only to quickly realize how overpowered they are. The rewards for these monsters are commensurate with the challenge, with considerable cash, rare items, and even new tanks dropped as loot for completing these hunts. While they contribute nothing to the overall story, a clear sense of the game’s humor comes across in the design of these giant bosses, among other enemies. Some of the enemies in the game are awesomely bizarre, from giant ants to a massive landshark, dinosaurs equipped with rocket launchers, giant medusa robots, and more. The game is committed to this campy approach, which really shines in terms of enemy designs. However, the localization is plagued with typos, translation issues, and many instances where information about enemies or characters appear to have been simply removed. Still, the zany humor is at least somewhat novel, especially in a title that features enemy names like “Murdamoeba.” 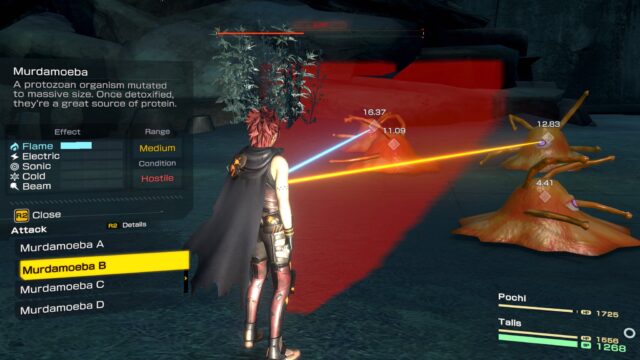 The localization is hit-or-miss, but enemy designs and names are pretty funny.

Reborn’s graphics are simply underwhelming. The empty desert is drab and ugly, littered with buildings that look lifted out of a PlayStation 2-era game with lifeless colors. The enemy designs — one of the game’s highlights — are creative and zany, but even they are marred by the unattractive graphics. The user interface at least is sharp and crisp.  The sound design from Satoshi Kakokura is more successful with a considerable number of high-energy tracks that gel with the game’s themes. The soundtrack takes on a heavy metal style during battle, but also features a number of more relaxing songs, still thematically congruent with a synth-wave influence and other electronic trappings that match the futuristic setting.

Metal Max Xeno: Reborn is allegedly a refined experience of the initial game, but there are simply too many under-baked mechanics thrown in for anything to stick. At the end of the day,  Reborn feels more like a tank management simulator with occasional forays into combat and exploration of an empty, generic-looking wasteland. Players are simply dropped into Dystokyo and left to their own devices. While some gamers will find themselves engrossed with monster hunting, others will find themselves frustrated by how Metal Max Xeno: Reborn is still unable to get things right, even after being fully reconstructed. A campy sense of humor can only carry a game so far. Unfortunately, this second chance at life is inexplicably held back by the same quality issues that plagued its progenitor.