Let Slip the Dogs of War

The first game is still relegated to mobiles and inaccessible to most, but Mercenaries Saga 3: Gray Wolves of War shows that the second game in this series was not a fluke. This may not be a tactical title that will garner attention and accolades from everyone, but it is definitely worth investigating for anyone intrigued. An engrossing game awaits those who peruse the 3DS downloadable library, one that could easily command more fans if only people knew about it.

Just like its predecessor, Mercenaries Saga 3 will look immediately familiar to tactical veterans. Up to six player characters square off on battlefields with a sometimes-fluctuating number of adversaries, taking turns to slaughter the opposition. Characters have a potentially wide variety of skills to use, and due to the relatively compact nature of these battlefields a victory tends to be reached fairly soon, at least compared to many tactical titles. The game does a good job of varying the layout and adversaries present, keeping events from feeling repetitive.

Mercenaries Saga 3 is a bit tougher than its predecessor, with enemies that won’t hesitate to attack characters until death. The difficulty is still manageable without any excessive preparation, thanks mainly to the wide variety of methods at hand for fighting back. Numerous passive abilities render characters tougher to take down, and a few active abilities will revive the fallen. Resurrection items are also for sale in shops, and while a limited number can be simultaneously held, that quantity will be enough to triumph. Exploiting the enemy AI is always a practical option, since despite being able to hit hard these foes aren’t going to take any prizes for ingenuity. A few powerful consumable items are also a good way of dealing with the opposition, and they can be purchased whenever desired. 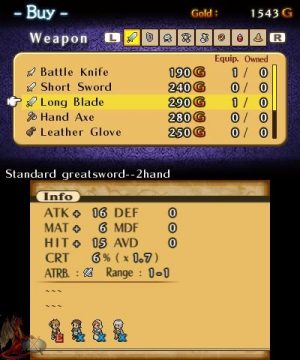 According to Sean Connery,
‘You usually drink water out of this.’

Abilities are unlocked through the skill progression system, where each new job a character takes on grants five additional aptitudes to learn and improve. Taking a job does not preclude the possibility of advancing down the other class path available to a character, and each of the playable cast has unique offerings and abilities. As in the preceding game, changing a class does remove all equipment, but otherwise there are no ill effects and thus every reason to experiment when desired. It is true that maximizing everything each character can do would take considerably longer than the ten to twelve hours necessary to complete this title, but choosing wisely eliminates the need to be so comprehensive in skill acquisition.

Inventory management can be time-consuming due to the sheer quantity of equipment that is likely to be necessary for fully outfitting the party, but otherwise is adequate. The snapshot image in store menus of whether new pieces are better than current kit can be misleading, due to several other factors than pure offensive or defensive prowess that aren’t conveyed until the player takes a closer look. Moving between options is nevertheless quick and free of unnecessary clutter, something that many titles still fail to provide.

The narrative of Mercenaries Saga 3 takes place on a continent undergoing martial strife. The player controls a small group of soldiers who at first seek to do nothing more than survive while performing missions as well as is possible. Wandering around the landscape without much clue about the overall situation, these troops are thrust into the limelight by saving a prominent commander. Doing so eventually places the Gray Wolves on the wrong side of other personalities with plans for the world. 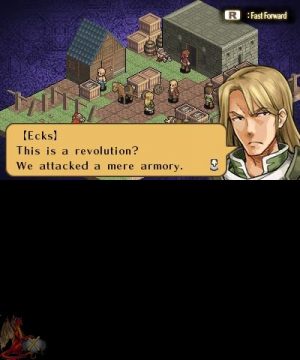 Ah yes, armories, famous for not being viable targets during revolutions.

Just as in the prior title, the story moves along steadily and features numerous events that are ostensibly interesting. Even theoretically-fascinating ideas such as a woman with a powerful demon living inside of her and an imposter to the throne are less riveting due to the lifeless localization however, something that isn’t helped by frequent typos that garble dialogue. Proceedings never become ludicrous so much as they stay uninvolving.

A couple of somewhat appealing tunes elevate the soundtrack for this game over its predecessor, but many of the compositions are blatantly recycled from Mercenaries Saga 2 and are just as unimpressive now. The sound effect for every confirmation in battle is an annoying piece of audio that further dampens the desire to pay attention to the aurals. Visuals show some details such as distinct looks for each character’s classes, but overall are reminiscent of middling Super Nintendo graphics. They aren’t ugly, but neither is there much in the way of eye candy.

Mercenaries Saga 3 is just about as enjoyable as its predecessor, though the slight difficulty increase would make me place 3 above 2 by a narrow margin if forced to choose. I also remember the lead mercenary’s name of Marion Balbastre thanks to its constant repetition by one character, though whether this is a positive I can’t really evaluate. Both of these games offer entertaining packages to be found by rooting around in the 3DS’s digital library, and deserve to be experienced by more people. 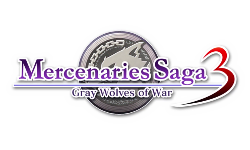