While Mario’s golfing origins date back to 1987, the Mario Golf heyday came between 1999’s Mario Golf and 2004’s Mario Golf: Advance Tour. The series briefly resurfaced in 2014 with Mario Golf: World Tour on Nintendo 3DS, but it has been a long wait for home console players to be able to return to the course with Mario and pals. Camelot has finally provided a new title in the series with Mario Golf: Super Rush on Nintendo Switch. While Super Rush features solid golfing mechanics, a dearth of content and a tacked-on Adventure mode set a low par for an uneven course.

Upon starting the game, Mario Golf: Super Rush provides players a choice between Golf or Adventure modes. Golf mode includes standard options for playing a round of golf with human or AI-controlled opponents, plus two new game types, Speed and Battle Golf. For newcomers to the sport, the objective in regular golf is to complete holes in as few strokes as possible; lining up their shot and predicted ball trajectory before striking, while taking into account wind speed, hill slope, and weather conditions. Players are able to implement small flourishes to the ball’s spin, direction, and curve. The ability to adapt to these conditions is paramount to continued success once the sunny skies and grassy hills of one course give way to blistering winds on the next.

Generally, the gameplay mechanics are well-developed and successfully covers the bases one expects from of a golf game, including easy cycling through various clubs. Golfers are able to scan the terrain as well as project the depth and trajectory of the ball, which provides a general idea of where the ball will land. Super Rush allows for motion and button controls, both of which provide for taut control of the club when swinging and the character while dashing through the course. Implementing particular spin techniques is effective and satisfying, demonstrating the developer’s skill in presenting this animated sports simulation, reminiscent of the tight gameplay mechanics Camelot has put on display with other recent Mario sports releases. 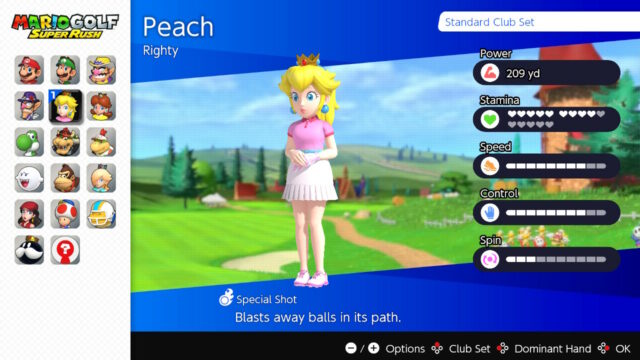 Each character has a wide range of golf attire to choose from.

Golfers looking for more excitement can participate in Speed and Battle Golf. In Speed Golf, players must race to get their balls in the hole as quickly and efficiently as possible, with each additional stroke adding time to the clock. Aside from running from ball to ball, players must contend with the antics of competitors who are able to obstruct and impede players by running into them. There is an element of chaos to this mode, but it is not substantially different from playing an ordinary golf round with the addition of some low-speed running between shots. Battle Golf is more akin to the frantic energy of a Mario Kart battle mode. During this feature, players are ushered into an open arena replete with power-ups and weapons as combatants seek to interrupt or delay one another in a quest to be the first to sink three balls. Battle Golf is the most realized mode in the entire game, and not because of its solid golfing mechanics either, but rather the satisfaction from electrocuting an enemy.

The news of the addition of Adventure mode was welcomed by many, especially long-time fans of the series. Unfortunately, Super Rush provides a bare-bones RPG-lite experience that can be completed in just a handful of hours. This mode has players create their own custom character and play through the courses of the Mushroom Kingdom, though only after finishing a lengthy and unskippable series of tutorial missions. Once those are cleared, golfers progress through each course, earning experience points and coins after each round. As players level up, they earn increases to their particular statistics — speed, stamina, and the like — as well as bonus points to allocate according to their preference.

Generally, the matches in Adventure Golf are similar to those of Speed Golf. There are a handful of boss encounters which make creative use of the golf mechanics, but these boss fights are few and far between. Unfortunately, the boss fights are neither terribly fun nor exciting. The story is worse off, with a paper-thin plot and a characterization that pales in comparison to other recent Mario games. Few, if any, of the characters featured in the story have any reason or motivation propelling them forward, and the marginal story suffers for it. The shortcomings of the narrative underscore the game as a series of well-designed, yet ultimately hollow experiences. Given what the series has achieved before, Adventure mode is underwhelming and feels more akin to an extended tutorial than an independent experience or even a full component to the game. 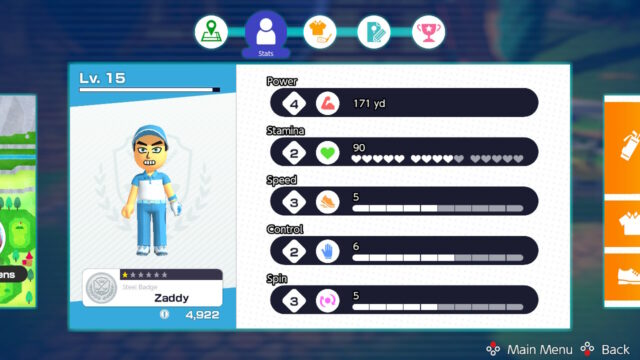 Super Rush at least meets expectations for presentation in a modern Mario title. The graphics are bubbly, bright, and animated. The game doesn’t stand out compared to the numerous other recent Mario titles, but the the courses are engaging and thematically varied, reminiscent of the disparate worlds of mainline Mario games. All characters feature adorable golf outfits, with options to purchase additional clothing through in-game shops using coins collected during matches. Sound design is also as expected, with musicals styles to match each course and a number of leitmotifs and references to classic Mario sound design sprinkled throughout.

There are only six courses available at launch, which is light, and once players are  finished with the brief Adventure mode, there is little else to the single-player experience. Rather, golfers will get more from the other modes online or by inviting a friend for some local or online co-op. However, there are no formal tournament or championship modes, impeding the possibilities of online play with this iteration of Mario Golf. While additional courses are planned via DLC, the fact remains that once players are finished with Adventure mode, there is little else to do other than cycle through the same six courses, either offline or on. Tight as the gameplay mechanics are, the actual amount of game there is to play is surprisingly brief.

Mario Golf: Super Rush provides some of the gaming experience expected from Nintendo, with a sleek presentation and tight gameplay. There is no disputing this is an enjoyable, albeit brief, single-player golf game that provides the framework for a compelling gameplay experience. The lack of content — number of courses, weak online play, blink-and-you’ll-miss-it Adventure mode — is the real problem here. Mario sports and golf fans alike will find something to like, however briefly. RPGamers looking for a proper golf-RPG hybrid are still stuck on their old courses.