Roleplaying games have long been a vehicle to drive a story and connect with characters.  Square Enix’s remake of Live A Live shows that even nearly thirty-year-old games can use narrative tricks to have a game shine brilliantly.  Its audiovisual and narrative designs immerse players in each of the individual scenarios, while it creatively builds upon the same gameplay base to create distinct experiences that connect with its audience in different ways.  Modern sensibilities, such as easier quest tracking and voice acting help widen its appeal, but the core experience remains outstanding after all these years.

Live A Live‘s grand opus gives players a choice of plenty of heroes with whom to start.  The seven scenarios of varying length and theme, set in different time periods from prehistoric to the far future, can be chosen in any order.  Each of these time periods is a vehicle for the developers to tell a story within the game’s engine while supplying its own twist, often a homage to films or other video game genres.  Some scenarios come akin to a fighting game or an action-platformer, while others play with stealth mechanics or a thrilling horror situation.  There’s enough story in each to find out what makes each hero’s heart beat and why they fight so hard to overcome evil on their terms, while all the main characters have different motivations that makes them easily discernible.  This gives each one a chance to stand on their own and have a fighting chance at being a player’s favourite.  Every scenario balances between quirky, heartfelt, and comedic by using the sincerest form of gimmicky tricks to have each one stand out.  The way each story is brought to life is unique and seeing how the protagonists are born and face their trials is a joy to experience.

Due to the main focus being on the heroes’ individual journeys, side characters and NPCs are mostly relegated to exposition or comedy.  They still have their moments and flesh out the scenarios while making the protagonists more three-dimensional.  The scenarios have connections and secrets among them that cause eagle-eyed gamers to check every nook and cranny to see the various ways everything wraps up.  There’s a lot of charm packed into each of these short stories, with each one playing out in ways that leave open a variety of interpretations for the motivations and inspirations of each route taken along the way, making the whole experience fascinating. 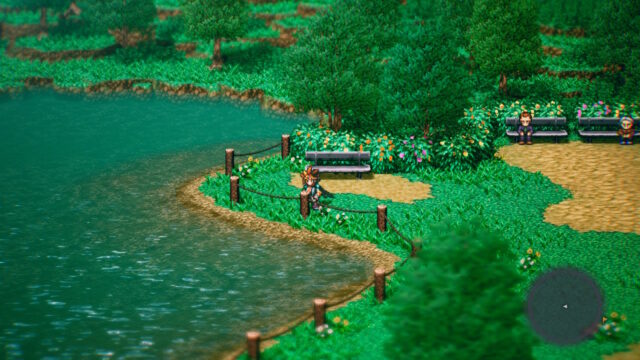 Backgrounds and visuals are vibrant making each scenario look amazing.

Scenario presentations include different visuals and music to fit each era. For example, its version of the Wild West happily runs with the cowboy and outlaws theme. However, more subtle nods are baked into each story. Not every hero is made the same way; one has the strength and convictions to stand up for what’s right, another just wants to rescue their love, and another is just looking to survive another day. Multiple ways of telling a story of what makes a hero are ingrained into each scenario through choice, dialogue, and gameplay, and how they all resonate differently is Live A Live’s greatest strength.

Getting from point A to point B in Live A Live has gotten a face lift with this Switch remake, including a mini-map readily showing players where to to go next, allowing for smoother integration of story beats.  Many scenarios contain choices; some are obvious dialogue options that can lead to different endings for the scenario.  Others are based on gameplay decisions the player makes along the way.  These small variations appear so often that paying attention to the actions of the character is important.  It’s generally easy enough to figure out the path to alternate endings on those that are dialogue-based, but gameplay-based endings can be harder to ascertain, making the quick save and load functions very handy.  Trying for these options can take skill, luck, and some detective work to either avoid all enemies, defeat everything in the scenario, or find hidden items that alter these conditions.  That each scenario features choice in such a diverse manner within the same system is brilliant.  The different endings are fun to complete, feature additional scenes, or provide rare equipment for the characters, but they are not a barrier to overall progress if missed.

There’s also some freedom in customizing characters.  Only some scenarios have characters gain levels, and getting stronger gear or obtaining new abilities is the only way for them to improve, if at all.  Each scenario’s mechanics are tailored perfectly to fit the story, including one with crafting, while another has the hero learn abilities from their enemies, and a third allows for players to lower the number of enemies they need to face by placing traps.  All these options make the game vary in difficulty, as it is not always so simple as maximizing a character’s power for each route.  It’s a delight that these gameplay options exist hand-in-hand with the narrative choices while building off the same combat system, giving players something new to experience with each scenario. 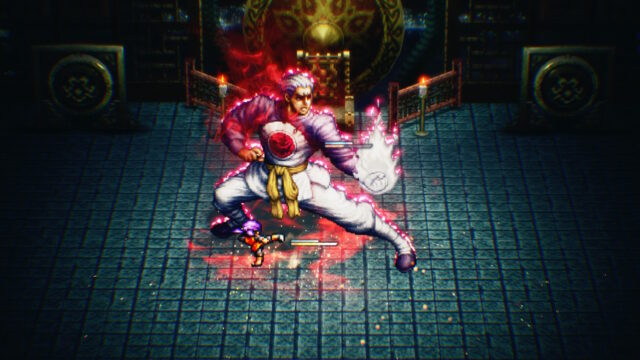 Gameplay varies by scenario but all abilities are visually striking.

Live A Live features an active-time combat system taking place on a rectangular grid.  Players can move around the grid but are locked into place after using an ability or item.  Abilities are grouped into a variety of ranges, elements, and attack types, with players needing to take into account enemy weaknesses and resistances.  Abilities also vary in strength and charging time with stronger ones usually taking longer to use.  This makes positioning important as leaving someone on the front lines can lead to them taking many strikes before they deal one attack.  A game over comes if every ally falls, but any ally reduced to zero can be healed unless they take further damage.  Abilities for both players and enemies can affect the environment, such as causing tiles to damage combatants standing on them every few second.

Each scenario plays with the formula for and the amount of combat, with some only having minimal scripted fights, while others have regular encounters built into them.  Even regular encounters can be different between scenarios as some have enemies visible on screen while others do not.  Scenarios can also specialize in a particular aspect of combat, with some focusing on movement to avoid enemy ranges, while others flood the field with foes that can be dealt with individually or by taking out the leaders that may be difficult to reach.  With a focus on something different each time, the battle system is constantly changing to keep players on their toes.  It can take a little time to get used to the flavour of combat in each scenario, but the variety in gameplay ensures that each scenario is distinct and complemented by the whole experience. 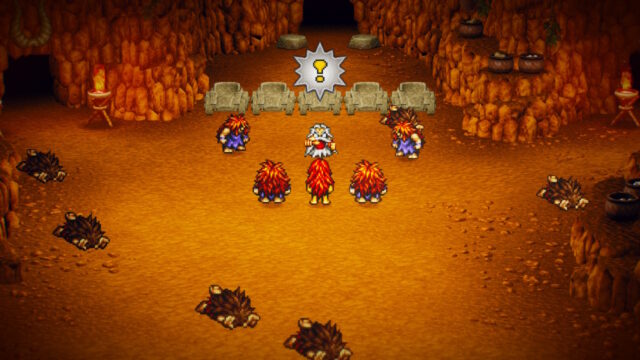 Some stories are told so eloquently that words are not even needed.

Live A Live is the latest game to use the HD-2D engine and the result is fantastic.  The game takes to this style easily, showcasing fluid animation and detailed backgrounds, while the sprite work does an excellent job at making the characters look alive as they move through their scenarios.  The character designs during combat are a bit more flat than in the world, but in turn the large amount of abilities have vibrant colours and animations that build the visual experience.  Voice acting in the game is a welcome fit and gives a new dimension to each of the characters without feeling out of place for any of them.  Every scenario has a different musical theme to fit their genre that is enchanting, using the unique tracks to fit the world perfectly.  The boss theme is shared across the scenarios, but it does a great job of amping players up for a climatic and desperate heroic showdown.

Live A Live takes the systems it has and finds new and innovative ways to tell various adventures through a simple framework.  Its unique highlighting of different genres, time periods, or homages is masterfully executed.  The combat is deeper than it looks and finds ways to keep things varied and interesting, while melding excellently with its sublime storytelling.  Each scenario is a treat to the senses in a different way, making any of them capable of being a favourite.  This game is an experience that needs to be played to be believed.  Square Enix has done the world a great service by updating this hidden gem and making it available to a wider and modern audience.