Seiken Densetsu, also known as the Mana series, has many western fans despite the fact that not all of its main titles reached the west. Only a couple of years ago, western RPGamers were able to legitimately experience its third entry for the first time. This year, Square Enix is bringing back the beloved and exotic fourth entry, which was originally released for PlayStation in Japan in 1999, for newer platforms as Legend of Mana Remastered. Although this version includes new saving options, improved graphics, rearranged music, and the option to turn on and off enemy encounters, it’s curious the developer didn’t decide to fully remake the game as it did with the two previous entries. Nevertheless, two decades after its original release, Legend of Mana continues to be a fine game that will bring back fond memories to veteran players as well as interest newcomers.

Many of the series’ staples are part of this fourth entry, yet Legend of Mana is the most zany in many aspects, including its non-traditional storyline. The story takes place many years after the events of previous titles, so those who haven’t played them can fully enjoy the plot. Players choose between a male and a female protagonist and are tasked with finding the Mana Tree. The world of Fa’Diel is empty, and it’s up to the protagonist to fill it with life again. By using the Land Creation System, players place artifacts to create new locales. Each city or dungeon offers picturesque characters, varied environments, and original quests. The story is made up of the sum of all the little experiences contained within these quests, which can be played in different orders. The way in which this non-linear story is told remains original and refreshing even after so many years.

Quests are varied, savory, and star extraordinary characters. Fairies, dragons, and Sproutlings — anthropomorphic plants — are part of the wide array of living beings that inhabit the colorful lands of Fa’Diel. These exotic and ingenious characters offer all sorts of tasks, such as assisting a young centaur in his search for true love or investigating ghostly phenomena. Some of these troubled denizens even temporarily join the party. There are a total of 68 quests, though some become unavailable after the completion of others. The peculiar quests of Legend of Mana offer a journey full of unexpected events. 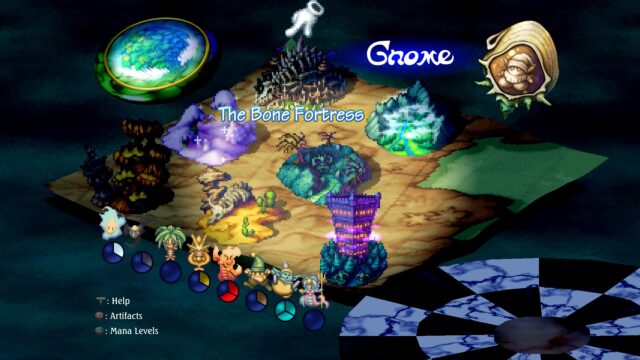 The landscape of Fa’Diel fills with colorful and diversified places.

Legend of Mana, like many games of that time, doesn’t guide players step by step in their quests, making their completion more challenging and rewarding. The game includes a diary for players to see which quests have been completed and which ones are pending, but players need to explore and try different things in order to complete most quests. To assist those who are stuck, there is a fortune teller that gives clues, yet her information isn’t always a clear guide. By completing quests, players receive the artifacts needed to create new cities and dungeons, where they’ll find even more quests.

Cities are easy to explore because they follow a linear path, but dungeons are tough because of their bizarre structures and the lack of a map. Each dungeon is divided into small chunks that can have one or several connections; sometimes these connections can take players to places that don’t make sense, such as a distant, previously-visited section. These puzzling structures make exploring challenging and interesting, yet a map would be a welcomed addition since it’s unnecessarily complicated to remember the best way to get around already explored areas. To make exploring a little less demanding, the remastered version has an option to turn enemy encounters off, but even with that active, players can still readily run peacefully in circles

There are many activities besides fighting and exploring, such as raising pets, growing crops, creating golems, forging weapons and armor, and crafting musical instruments. Most of these features unlock little by little by completing quests, preventing this diversity from becoming overwhelming. New pets are acquired by catching monster eggs and waiting for them to hatch, and they can be fed as well as powered up by playing a mini-game called Ring Ring Land, a new feature to the remastered version. Using the forge, players can create powerful fighting partners called golems and forge new weapons or temper already-owned ones. In the workshop, players can create musical instruments used for fighting and catching spirits, who can be encountered in different locales and need to be attracted with music in order to drop items. With this wide set of activities, the game includes several ways of having fun. 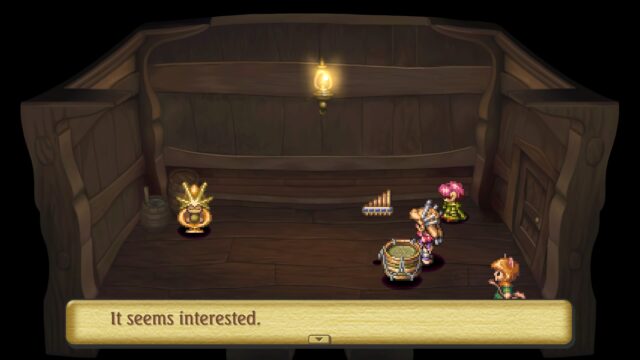 Spirits need to be attracted with music.

Like previous Mana games, Legend of Mana includes a real-time battle system, and a second player can join the fight locally. Players have a normal attack, a heavy attack, and can select two other actions, such as defending, jumping, or counterattacking. In addition, there are four slots for skills, which can be magical or physical. Physical skills are unlocked by fighting with certain weapons equipped and can only be used with those weapons, while magical abilities mostly come from musical instruments and can be equipped with any weapon. All these elements make battling fun, but it would be a great improvement if skills were faster in order to make combating more fluid. Additionally, the AI of fighting companions isn’t the best and most of them tend to be clumsy and of little help.

Since common enemies are hardly a threat and only bosses offer a tough battle, those who want challenging encounters can switch to an insane difficulty in New Game+, in which players carry over most elements of the first playthrough. With easily missed quests and others that can be taken in different order, Legend of Mana offers a non-repetitive journey and invites players to replay the adventure. Old fans are welcomed to revisit the game since this remastered version includes new saving options that make the journey more enjoyable. There is a new autosave feature that helps backup progress easily, and players are also able to save almost at every moment. 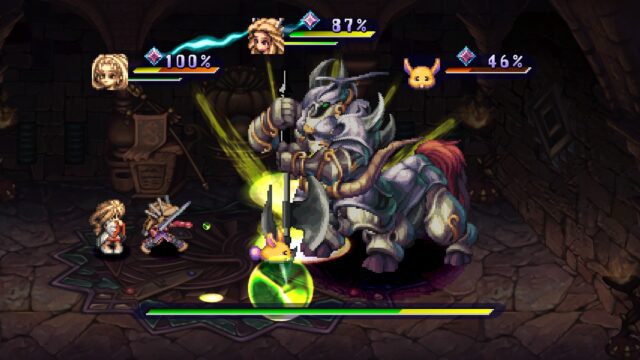 Enormous bosses usually require a good display of skills in order to be defeated.

One of the highlights of the game is its breathtaking soundtrack composed by Yoko Shimomura. This iteration includes both the original soundtrack and a rearranged version that takes the music score one step higher. The music ranges from festive tunes — ideal for towns — to tense and mysterious music that makes dungeons even more intriguing. Not only music provides characteristic moods, but also visual details make each locale easily discernible. The remastered graphics were improved but remain true to the unique style and tone of the 1999 release. The exotic designs of creatures, characters, and foes mixed with the music style make a superb representation of its time, and may jog melancholy memories in many veteran players.

Fans of the Mana games will enjoy many staples of the series developed in original ways in Legend of Mana Remastered, and newcomers will encounter a beloved classic that includes an unconventional adventure and a remarkable soundtrack. I love the game and recommend it without hesitation, but there’s always going to be a sense of a missed opportunity for Square Enix to have given it the full remake treatment, with the voice acting, 3D visuals, and a more-polished battle system that Trials of Mana received.