So Romantic and HypeTrain Digital’s Jack Move is a cyberpunk RPG inspired by several Final Fantasy games and ’80s computer interfaces. This modern game with retro vibes replicates features from its sources of inspiration, including turn-based combat and pixel art, but gives them little twists such as combat taking the form of computer hacking and having players equip hardware and execute software during combat. The nearly ten-hour adventure is fun and enoyable, with attractive artwork, but the game doesn’t reach that next level as it ultimately brings very little new to the table.

Players take on the role of Noa Solares, a vigilante hacker who takes on dangerous jobs to make a living. She lives in a cyberpunk city where technology is at its peak and humanity seems to be declining. Noa partners with Ryder, who is literally “the guy in the chair” who provides remote assistance such as hacking delivery drones to help her return home safely. This duo puts their primary money-making missions on hold when Noa’s father, Dr. Abner Solares, calls out of the blue asking for help. A far riskier mission is just about to begin as they discover that a nefarious megacorporation called Monomind wants to get hold of breakthrough AI advancements made by Abner and has kidnapped him. This premise is enough to motivate players for the subsequent short run time, despite only surface explanations of the world with cliché plot twists. The setting readily delivers the experience of living in a futuristic world, and the widespread use of vintage devices makes it feel even more authentic.

The characters who inhabit this cyberpunk world are a highlight with their charming interactions with each other. Dialogue tends to be short, concise, and entertaining, with most characters having appealing personalities to match. These interactions try their best to add to the world-building of this society in decline. Out of all the cast, Noa’s Uncle Guin steals the show. He’s a remarkable hacker with a shady business and a carefree personality. He helps Noa throughout the story without breaking a sweat, and he even states that he could do more to help but that he simply doesn’t want to. Monomind also employs a couple of interesting antagonists who make the story more engaging, including a mad doctor who is jealous of Abner’s accomplishments and a sketchy woman who pulls the strings of the whole megacorporation. 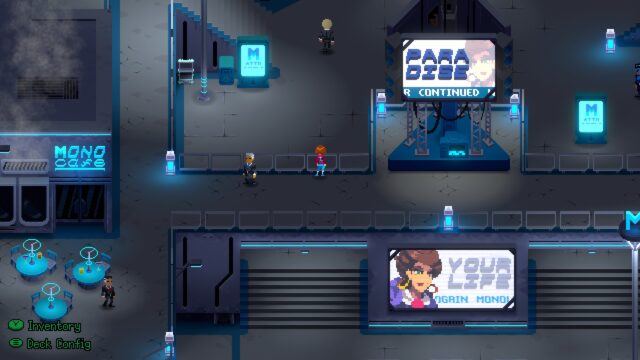 Besides her main objective, Noa can complete side errands if she decides to talk to NPCs and help them with their predominantly superfluous problems. For instance, Noa may help a desperate kid get a copy of a game that all his friends have except for him as well as help a little girl find her lost toy. These errands give context to the setting by showing the needs of citizens in this high-tech reality, propel players to explore this world, and sometimes reward them with items that are used in battle. The city also sports shops where Noa can buy items (dubbed “patches”) that cure status ailments or restore data and health points, hardware, and software. Additionally, players can upgrade Noa’s virtual memory system to have more blocks to install software.

While Noa is exploring, she engages in turn-based battles that take place in cyberspace. Inside this battlefield, the names of abilities change. Noa is the sole party member but has many actions at her disposal: hacking, which is the normal attack; executing software, which includes offensive, defensive, and buffing skills; and unleashing special attacks called Jack Moves. These moves are drastically stronger than the rest of the actions but need a full gauge to be used, which fills by dealing and receiving damage. Software consumes Noa’s data points, with more powerful programs consuming more data points. The virtual memory system where Noa installs programs is limited, so she can only have a few programs installed at the same time, but players can swap out their installed software mid-battle, which is very welcome. 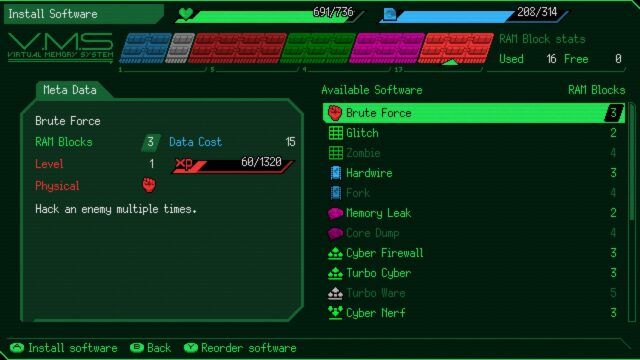 This is the virtual memory system where Noa installs software.

The traditional elemental system is wittily replaced with three elements named Cyberware, Electroware, and Wetware, with enemies who are resistant to physical attacks usually being weak to one of them. This makes swapping software during the battle really important. Moreover, players can carefully plan their actions since turns are shown on top of the screen, with the cache option allowing players to delay their turn and defend until they act again. Exploiting weaknesses is crucial to finishing battles swiftly, and recovering health is just as important since most enemies deal a lot of damage, so no combat mechanic feels superfluous. Noa can equip hardware with passive abilities or stat enhancements, including counter-hacking and attacking all enemies with software abilities. In this way, players are able to customize Noa, but with only three available slots hardware must be selected carefully. The variety of enemies is enough for the length of the game, but some bosses feel a little tedious due to being damage sponges. These battles are considerably long with no real surprise, threat, or subsequent stages; just the same strategy for dozens of turns.

The encounter rate in Jack Move can be customized, with players able to choose whether they like to increase, decrease, or turn it off entirely. However, deciding to have a low encounter rate or turning off the encounters can leave Noa unprepared for scripted battles. This option is available anytime, making it satisfying to revisit locations or solve the occasional puzzles without pesky battles getting in the way. 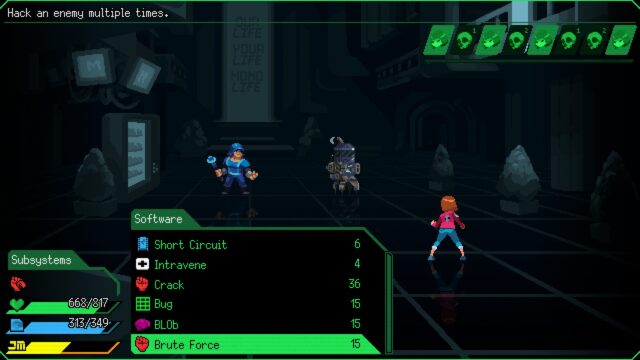 The cyberspace is a wonderful battlefield.

Jack Move’s graphics are simple but effective and lovely. The pixel art looks good all of the time, and Noa wears stylish clothes. The animation of the flashy Jack Moves is where the game looks best, and the cyberspace is a good backdrop. However, detailed story scenes as the ones shown in the trailer are entirely absent from the final game, which feels like a missed opportunity to take the visuals a bit further. The soundscape is full of  enjoyable effects and pleasing tunes, which are unique and catchy on their own to stand out. There is a constant use of synthesizers and electronic drum sets that readily deliver the experience of being in a digital world. The fusion of these sounds makes whatever is happening in the story more exciting.

Jack Move’s ten-hour campaign is sure to please many fans of cyberpunk RPGs. Its short adventure is not only a journey into a futuristic world but also a tribute to games and inventions of past decades. Jack Move is recommendable for those who want a short turn-based game and don’t mind a story full of commonplace twists.