Only You Can Prevent Ghost Towers

Far off in a mysterious land where outcasts are sent into exile, a mysterious tower appears, looming over the horizon. Fresh from the rampant wars of previous generation and concerned that the tower’s appearance is a sign of the return of the rebellious Kigata Doman — a man who used black magic in order to overthrow the fledgling Shogunate — Tokugawa Iemune, the reigning Shogun, assembles a secret team that specializes in the supernatural to deal with the situation. To assist the group, Iemune offers a tool known as the Ishun no Ofuda. With this magical item, whenever the group splits into two they will be able to sense each other but one of the two groups must remain inactive, temporarily petrified. With a word of encouragement, the group is sent to that towering maze, the Hyakki Castle.

That paragraph represents all that there is to the story of Haunted Dungeons: Hyakki Castle. It took more effort to remember what exactly was the razor-thin reasoning for controlling a group of Edo-period demon-busters sent to a magic tower than the game cares to even recall its own story. The game’s story is told entirely via brief paragraphs that adorn the loading screens between floors. Fortunately for Hyakki Castle, the plot is usually not a prerequisite for an entertaining dungeon crawl. Unfortunately, the rest of the game fails to hold up as well. 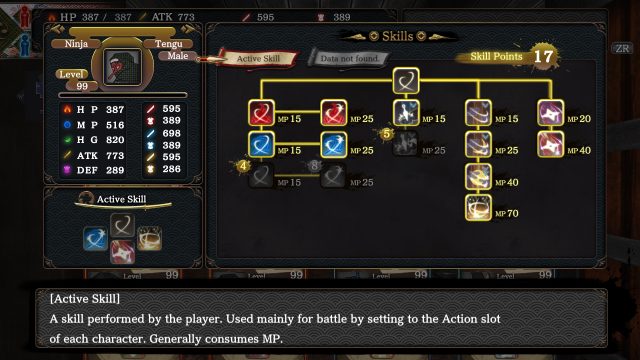 A typical skill tree in the game. No, there isn’t anything more to it.

Right off the bat, players are instructed to form a party. The game touts that you can play as more than just human characters, with oni, tengu, and nekomata being other options. The races have mechanical differences, which combine with the game’s four different classes to offer the illusion of interesting decision-making when creating a party. However, three of these races are very closely tied to a particular class — the exception being humans who are generally ok to slot into any of them — so going against this is likely to only cause difficulties. Each of the races has different passives gained at certain level thresholds, but on the whole the recommended party — one of each race as their default class — is more than adequate to tackle the game. The game also lacks any interesting mechanics or challenges that would make different party makeups worthwhile experimenting with.

There are two main aspects of Hyakki Castle that set it apart from a standard dungeon crawl: real-time gameplay and party-splitting. Real-time gameplay isn’t unheard of in the genre and in some ways Hyakki Castle shares a decent amount of DNA with Legends of Grimrock. But where Legends of Grimrock feels like an actual RPG, those elements of Hyakki Castle feel far more static and locked. Characters in the game have skill trees that can be unlocked with skill points earned at a level up, but the skill trees do not offer much in the way of choice. Fewer than twenty skills exist for each class, many of which are improved versions of earlier skills. Up to four skills can be equipped at once — one assigned to each face button. There are three equipment slots, one for a weapon, one for armor, and one for a charm. However, most of the equipment in the game offers only slight variations on trade-offs between physical and elemental damage types. The game offers plenty of chances to utilize equipment, but every weapon change requires dealing with the game’s cumbersome inventory system. At least it pauses the action while players are dealing with their inventory. 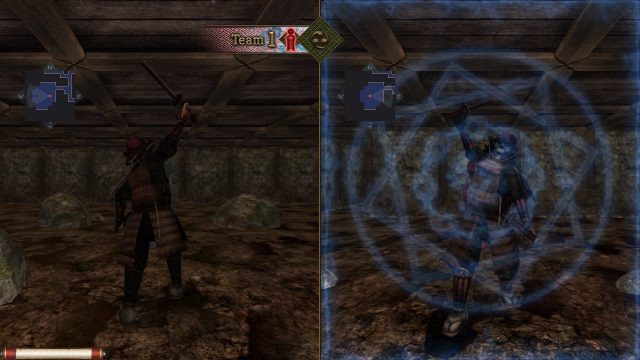 Meanwhile, the real-time aspect of the game does not add much flavor to a fairly dull stew. Monsters can be seen throughout floors and act as roadblocks or hazards until they are dealt with. They shuffle along predetermined paths or stand watch over specific pathways, but one thing they all have in common is they are easily circumvented, at least while in combat. The real-time aspects of the game allow for easy enemy manipulation; the party simply take a step forward, cycle through the party’s strongest attacks in quick succession, and then pull back as the enemy attacks. While multiple enemies at a time can complicate things, most of the enemies in the game can be dispatched in this manner.

Staying in the enemy’s face can be just as easy, especially if the party has a tank. This involves splitting the party, which can be done at the simple press of a button. Doing so lets players control of one of two teams in the party — a split that can be changed any time the party is together, allowing for two parties of two or a party of three and a party of one — while the other team is frozen in stone, massively increasing defense. In combat, this is mostly used to pincer attack enemies, taking turns drawing aggro while the other swings at their back or side, whichever is the weak spot. It’s effective, but the downside is that it is incredibly monotonous taking out the game’s enemies in the same manner over and over again without much need to shift strategies. This is only compounded by the increased defense offered from the stone form. My oni tank could not be damaged in this form even against the final boss, making the fights tedious before even considering the inflated health pools of the monsters in the later levels. The only time the combat shows any signs of wanting to be interesting is against the game’s few bosses who, if nothing else, require slightly different strategies than normal. They are also not particularly difficult or interesting but do offer a welcome change of pace. 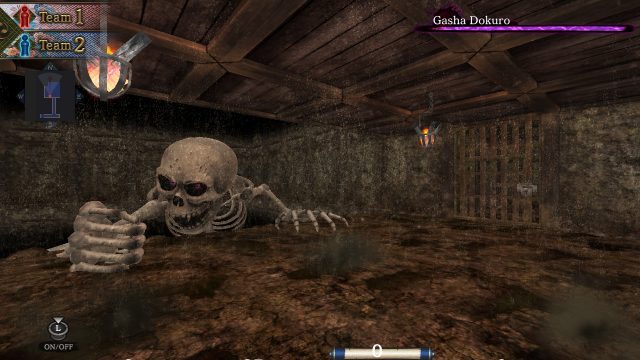 The game’s boss fights offer up some of the only visual and mechanical changes.

A change of pace would be welcome when exploring, which is a chore. Given that the game spends most of its time wandering halls, tedium quickly sets in. Presenting itself as being horror-themed — featuring oni and yokai from Japanese myth and folklore — nothing of the actual presentation is interested in creating any sort of atmosphere. Bland hallways dominate much of the proceedings with an occasional texture change every few floors. The layouts are the expected winding hallways filled with dead ends and levers that need to be pulled to open doors. The only wrench the game attempts to throw into this template is the need to split the party to solve simplistic puzzles for progression and the hunger system. In addition to health and mana, players will have to monitor the character’s hunger, which decreases every step you take. When the hunger meter gets low, characters will deal less damage and become less accurate. The game provides enough food for this to never really be an issue but the last floor of the game nearly depleted my reserves. A fun bonus the game offers for one hundred percent exploring a floor is an extra bit of treasure, but since the loot in the game isn’t very interesting the prize mostly just serves to make the game easier.

For as simple as a game it is, the game runs fine on the Switch. The draw distances of the levels and the pop-in is noticeable but really doesn’t impede gameplay in any meaningful way. The music and sound design is as bland as they come, leaving so little an impression that all that’s left is the admittedly fun creature design. But engaging with enemies isn’t entertaining and the levels offer no fun secrets to explore. Hyakki Castle promises an interesting premise but can deliver on little else besides some pretty loading screen concept art.