It’s impressive to see how far Harvest Moon has come in fifteen years. Even more remarkable is the fact that the series continues to thrive where other franchises have long been forgotten. While the majority of the DS incarnations were not as impressive as they could have been, Harvest Moon: A New Beginning is a spectacular example of taking the best of every game in the series and amalgamating it into the best Harvest Moon game created within its fifteen year existence.

Harvest Moon is not a series known for storytelling, but A New Beginning attempts to tell a story that is not only rewarding, but linked to the play structure of the game. Everyone has moved out of Echo Village, and players take on the role of a dashing farmer who will attempt to revitalize the town and make it a place worth visiting. The residents of Echo Village are counting on the farmer to restore the town by building places to entice newcomers to stay for the long haul. Even with this simplistic story, one must give credit to how it’s woven into the overall structure of the game. Every time the player builds a new piece of property or landmark, more of the story is uncovered. Friendships are much easier to maintain as well, so more plot is given as bonds are formed. There are also a total of five major renovation plans that must be completed to move the plot along, each varying in challenge as the game progresses. While it’s far from a New York Times bestseller, the story is serviceable and sweet, but it’s not why people should play this game. 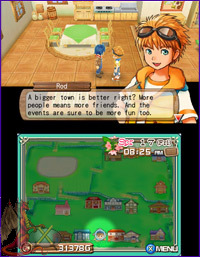 Rod’s a sweet pea and a good wholesome boy.

What takes hold of players in A New Beginning is the game’s customization system. Everything in the game can be customized, from how the player characters look, to the town’s overall design. As players gain blueprints and materials throughout the game they are able to create Echo Village and their farm any way they please. Furthermore, the more construction that takes place, the more hidden areas are uncovered. In fact, A New Beginning has lots of new areas to discover. As more sheet music is found and played, more opens up. As a result, players have many activities to enjoy during the day.

Moreover, the edit function in the customization menu is a fabulous addition, as players can haul buildings and rearrange them as they please. This interface is not only stylish, but easy to use, and a function that is critical to progressing in the game. The amount of things to create and interact with is endless and offers players a plethora of duties to keep them entertained. Players can create lavish gardens for the Gardening Tour, or simply ensure that the town has enough benches for folks to sit on. The customization aspects and editing feature on the whole shows that Harvest Moon has grown up considerably by creating such an addictive element that warrants players telling themselves “just one more day!” This customization system is bar-none the best thing to ever happen to the Harvest Moon series and something that keeps A New Beginning from feeling stale.

Outside of the addictive construction system, the farming mechanics has had some minor upgrades as well. Besides adding fertilizer to crops to add more star value to the overall shipping price, soil plays a new role as well. By customizing the soil plots, players can add more value to their crops. Other additions include beekeeping and mushroom logs, both of which provide paths to profit. Fishing has also gotten a new feature with the fish traps that allow players to gather up to five items within a trapping area. These minor tweaks and additions are greatly welcome as they help enhance the overall experience. 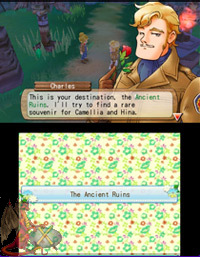 Marriage has also seen a pleasant change in A New Beginning. After selecting a spouse and getting married, the player’s spouse is no longer a useless lump on a log. In fact, the spouse can now help players gather items, cook meals, and help with chores. While this may not sound impressive to most, it’s great to see that the spouse does more than just remind the player how wonderful they are (which is also nice).

Sadly, A New Beginning is not without some flaws. For starters the localization has a few hiccups, especially in terms of the text flowing properly. There are also a few sentence structure and grammatical errors that are fairly noticeable and distracting. The music is also serviceable, but bland enough that players will likely turn their sound off. The sound effects and music lack any sort of imagination, which is disappointing considering how inventive A New Beginning is. However, the graphics are a major step up from Two Towns and are quite lovely. While there is a tiny amount of graphical clipping, this does not detract the way the localization does.

With over sixty hours of content, five major renovation plans, and an addictive customization gimmick, Harvest Moon: A New Beginning shines like no other game in the franchise. While this is certainly a game made for existing fans of the franchise, there’s room for newcomers to learn the ropes with the game’s many tutorials. Harvest Moon: A New Beginning is a strong and memorable addition to the Harvest Moon family, and a game I know I’ll be playing until the wee hours of the evening.