Can a Grandia game that tries to rely solely on the series’ excellent combat engine succeed? Grandia Xtreme might appear to pose this question, but it does so ineptly. A great combat engine cannot exist in isolation from all the other qualities an RPG should possess, and Xtreme manages to make a mess of just about everything else. The combat is quite entertaining, to be sure, but other Grandia games have the same excellent battles along with a lot more, making it clear why Xtreme was not called Grandia III.

Just like Grandia and Grandia II, combat is constantly enjoyable and engaging. The essence of battle is that characters take turns, but a number of tactical concepts have been incorporated to make the system anything but standard. Every actor on the battlefield is represented via an icon on a gauge, displaying how far they are from either being able to make a move, or carrying it out. The time it takes to carry out a move is vital when any move can be canceled before it is accomplished, allowing watchful players to theoretically beat enemies without ever being hit, though stopping every attack is not practical. Canceling enemy attacks is not the only tactical concept combat incorporates, as landing a physical attack requires the attacker to run around the combat field in order to get close enough for the strike to land. Almost every magical strike and special move affects a certain area, whether a straight line, a circle around a caster, a circle around the target, or a fan expanding outward from the caster. The player can usually observe the enemy’s planned course of action, removing guesswork from the equation when planning actions. Xtreme‘s combat may be mostly borrowed from the earlier games in the series, but what worked brilliantly before remains captivating.

Not much has changed in combat since Grandia II, with the single largest alteration being how SP for special moves is acquired. Instead of starting with a full complement of them and depleting it as battles continue, characters begin with no SP and gradually acquire them by dealing and taking damage. This makes it difficult to blast the first enemies in a dungeon with special moves, but is quite useful at allowing characters to keep throwing powerful attacks at the enemy after a more traditional system would have exhausted the means to do so, making it a worthwhile addition. The other major change is the alteration of how enemies surprise the player: by holding the X button the main character stays in a battle-ready stance that will never be preempted, but moves more slowly and cannot interact with anything. Needing to hold the combat-ready stance is fairly bothersome, but since even an enemy surprise attack is nothing to be concerned with because of the consistently excellent combat system, this aspect is not a major issue.

The problems with Xtreme start to be revealed in the beginning, with its plot being concurrently predictable and boring. Those adjectives apply throughout the game, but the beginning manages to be illogical also, as the protagonist gets over his refusal to work for the military very quickly and never tries to bring it up again, despite being kidnapped because of his unwillingness to freely perform that job. Evann’s dislike for the military is never explained, nor why it needs his assistance to clean up the Elemental Disorder that has been destroying settlements around the world. Conveniently, Colonel Kroitz, who Evann has an adversarial past with, turns out to be the antagonist. Characters are one-note and rarely get the opportunity to say anything that might flesh them out, with the exception of Evann, who manages to recycle the relentlessly optimistic attitude of numerous other protagonists without adding anything new. The major plus of the plot is its relative brevity. 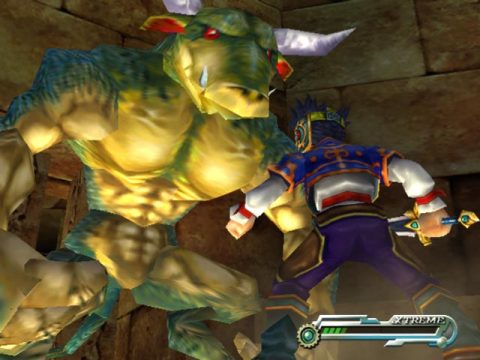 The drama! Will that minotaur ask Evann out, or will the tension stay unbroken?

For some reason Game Arts thought making the army base Evann wakes up inside into the hub for everything else in the game would be a good idea. Every time a dungeon is exited, going through the army base and answering the same questions from an attendant soldier is necessary. Talking to this soldier is absolutely essential, however, because he is the only means of saving in the game. One save point in the entirety of the game mandates lots of backtracking, but once all the other reasons backtracking is required are unveiled, this aspect does not seem nearly as bothersome.

In Grandia Xtreme, skills are acquired via items called vellum, located inside of dungeons. The vellum take up a precious inventory slot, and they must be deciphered by a specialist in town. Thus there is no way of determining whether good or bad skills will be obtained by a vellum without taking it back to town, and they can only be equipped in town, reducing the ability of the player to tinker with their setup. Skills have a variety of beneficial effects, from increasing the power of magic spells to causing enemies to drop more items or gold, but the method of setting them onto characters is far more constraining than it should be.

Similarly to skills, the eggs that enable magic use can also only be equipped in town. They are compiled in a separate place than the skill vellum, which means they do not affect inventory management, but the means of improving them demands an enormous commitment of time. Mana eggs must be combined in town, with the resulting fusion producing a single egg that possesses more powerful spells. Creating the most powerful eggs demands many journeys through the dungeons, because they arise from the end fusion of more than ten lesser eggs. Simply fusing the eggs in town takes awhile, getting the eggs (which is dependent upon luck because the spoils offered in the dungeons are randomly generated) takes a very long time.

The inventory limit as a whole is apparently meant to force more attention onto item management, which it succeeds in doing. A total of thirty items can be held, and up to ten of each healing item without a problem. Beyond those numbers, the game will simply not allow further items to be acquired, a particular problem if enemies are coughing up many skill vellum that cannot be evaluated unless returned to town. The random nature of rewards inside dungeons also means that old, weak equipment may be awarded, but unless the player remembers the name of it, the only way to discover its value is by adding it to the inventory. This system is ill-fitted for a Grandia game, serving to drag out playtime in the name of grinding. 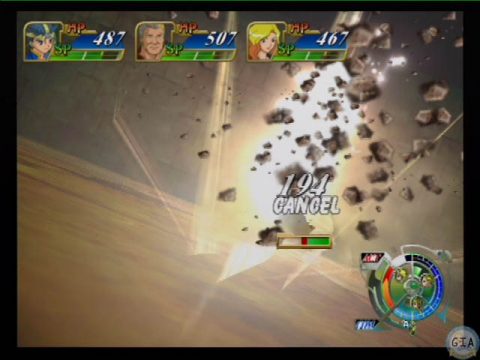 The camera makes it hard to tell who got canceled, but combat stays engaging even if it was you.

Xtreme proceeds rather enjoyably in spite of these glaring issues until the first four dungeons have been completed. At that point all the old dungeons’ enemies become stronger, and new dungeons can only be reached by traversing a large randomly-generated locale. Each time through a dungeon, the traps, environmental hazards, and bosses reappear. It is possible to progress through the game without visiting older dungeons again, but the enemies become powerful enough to make this unwise, revealing that Game Arts wanted players to level grind often. The dungeons are interesting to traverse, per series tradition, but the randomly generated layouts are simply bland and boring. Xtreme‘s length fluctuates based on how much grinding is done, but the game feels even longer than the forty or fifty hours probably necessary to see an ending.

Grandia II looked very good for the Dreamcast hardware. Grandia Xtreme looks almost identical to its predecessor, to the point of using enemy models that were in the earlier game with nothing more than a palette swap. Particularly during the randomly generated dungeons, Xtreme becomes boring to look at, but reusing the models from an earlier game was the height of laziness by Game Arts, taking no advantage of the PlayStation 2’s superior capabilities.

While not to the same degree as the visuals, the music does use a few compositions from the earlier games. Noriyuki Iwadare seems to have put very little effort into this game’s score, with many of the new compositions sounding like a band tuning up: not unpleasant, but completely unmemorable. The voice acting heard in Xtreme is incredibly uneven: while a few well-known voices deliver performances that are fine, most of the characters are either irritatingly hyper or stupefyingly monotone in their delivery.

Xtreme is not really harder than earlier Grandia games, simply more irritating because of the limits on saving. When each dungeon has only one or two exits, a lot of progress can be lost if something goes drastically wrong. As for replay value, the random returns from dungeon spelunking and the increased enemy attributes after points in the plot will provide quite a bit if the repetitive nature of plumbing the same places ad nauseam can be endured. A gigantic new randomly generated dungeon is also unveiled after the credits roll, should additional content be desired that desperately.

Combat in Grandia has always been a delight, and it remains entertaining enough in Xtreme to make the game tolerable — for awhile. Preceding games in the series had a lot more variety than this one, and kept showcasing new things until the end. Xtreme‘s shtick is like a chair pushed back onto one leg and held in the air by someone: eventually the person holding that chair will get tired, and one leg won’t be enough support, so the whole thing falls down.