From Tabletop to Desktop

The history of role-playing games wouldn’t be the same without board games, with some iconic video games finding their roots on the tabletop. Flaming Fowl Studios put a lot of effort into digitizing Gloomhaven, a complex game that has been highly praised. The result turns out to be mostly positive, adding features that are not part of the tabletop game while treating the original with a lot of respect. A brainy board game such as Gloomhaven expects players to spend a couple hours per session, plus extra time to assemble everything. The video game has everything ready and gives players plenty of gaming time, yet it does feel best playing a little at a time to prevent the game from becoming tedious.

The video game offers the acclaimed campaign of the board game and adds Guildmaster, a digital-exclusive adventure that includes the core gameplay but has a different progression and quests. Both Guildmaster and Campaign modes can be played solo or in an online co-op mode for up to four players. Six initial classes are available and eleven more can be unlocked. The campaign is good, but Guildmaster feels better because of its pacing, which follows a more traditional video game experience. Those who want to play both modes should probably begin with Guildmaster to view the tutorial since the battle system is almost impossible to crack without it.

The story of Gloomhaven is made up of the sum of the events occuring in quests instead of having a clear or linear narrative. Players have many quests simultaneously, so they are given the freedom to choose which quests to undertake, with their decisions affecting how the game unfolds. While the campaign’s story is set in the eponymous city of Gloomhaven and nearby places, the Guildmaster’s story takes players to new locations not explored in the tabletop game. Both feature cultists, enchantresses, demons, among many other hostile creatures, and players will find themselves trying to obtain relics, defend allies, and kill lots of creatures. The story features well-written quests, yet fails to include strong overarching motivations to make a highly immersive environment. 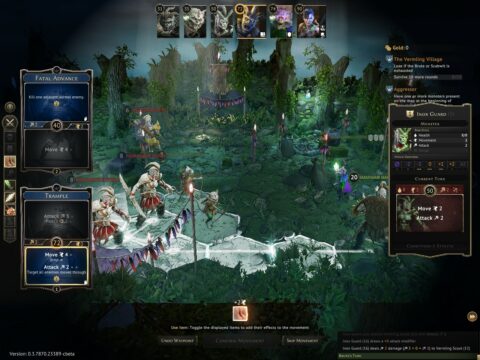 The core of the game is the use of cards.

The campaign has 95 missions, but not all them are compulsory. Missions are dungeon battles, each with specific objectives that need to be cleared; the most common objective is killing all enemies, but other objectives are lasting a number of rounds or escaping. Most quests take at least half an hour to be completed, so the game offers a lot of content. Before reaching quests’ locations, players will encounter detailed situations and will have two different courses of action. As a consequence of these encounters, players can recieve or lose gold, as well as enter a dungeon blessed, cursed, or harmed. In the campaign, mercenaries have their own aims that motivate them for the adventure; when they complete their goals, such as defeating four bosses or collecting 200 gold, they retire and another class unlocks, allowing players to replace retired mercenaries. 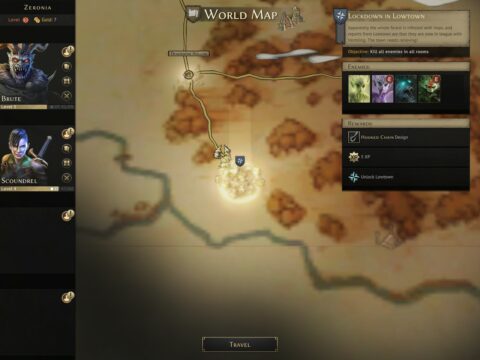 Quests have different objectives and rewards.

Gloomhaven’s classes are really interesting and make it stand out. Each mercenary comes with 30 unique cards, making each class play differently since they have diverse strengths, stats, and synergies. Players choose from two to four mercenaries for their party: more party members, more enemies in each dungeon. To be victorious, players need to complete each scenario’s main objective. Additionally, players need a choose a particular objective for each character in every dungeon, with different options leading to diverse scenarios. Meeting mercenaries’ objectives, which range from being the first one to defeat an enemy to collecting a certain amount of gold, grants Perk Points or extra experience. Mercenaries gain new cards when they level up, and players are able to select which cards to have on their decks. Cards can be enhanced to make them more powerful or add a status effect to them. Players can also power-up their characters by buying items.

Dungeons are divided into a grid, which includes obstacles, traps, and doors. Enemies in other rooms will only appear after a door is opened. At the beginning of the round players need to choose two cards for each character. Enemies and allies are ordered depending on the agility value of the card that they selected first. Cards have two abilities, one on the top and another one on the bottom. If players choose the ability on the top of one card, they can only use the bottom ability of the other card and vice versa. Instead of using their specified abilities, all cards give players the chance to unleash an attack using the top part of the card or move using the bottom part of the card. While some abilities have a mark showing that the card will be burned after using it, others only cause the card to be discarded. Discarded cards can be recovered after long rests, which use a full turn but recover two hit points, or short rests, which allow players to perform actions that same turn but without healing. However, resting burns one discarded card to let the others be recovered. Burnt cards can only be recovered with certain abilities that few mercenaries possess. The battle system is hard to grasp at the beginning, but it is rewarding when one learns how to master it.

When players are attacked, they can choose either to receive the damage, burn one available card, or burn two discarded cards. Since cards are really valuable because characters get exhausted (unable to fight) if they run out of cards, receiving the damage tends to be the reasonable choice, yet sometimes cards can save one from dying. Attacks have a marked amount of damage, but can be affected by attack modifiers (x0, -1, +2, x2, among others). Every mercenary has a deck of attack modifiers, with players able to spend Perk Points to improve them. In addition, there are status effects such as stun, poison, and immobilize that are also crucial for strategy. Items can also be used to gain advantages, such as moving two extra spaces or adding poison to the attack. Some of them may only be used once per battle, while others can be used again after resting. Loot is not gained automatically, so players need to use an ability or stand in that square to pick it up. All these elements add to the sophisticated battle system and force players to really plan their actions. 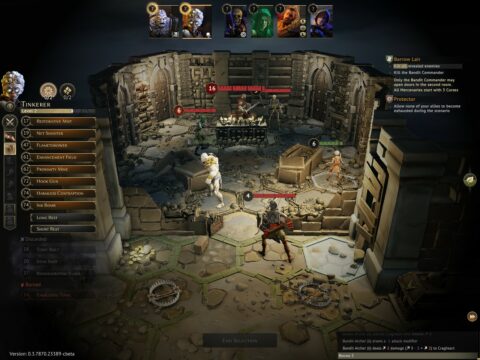 Players have to choose their cards wisely to exploit their powers.

Something that the video game adds is music and voice acting, albeit in a limited capacity. The few tracks and sound effects to judge aren’t memorable. The campaign’s narrator, nevertheless, is highly convincing, for he really helps with the illusion that a dungeon master is guiding the whole adventure. It would be great if Guildmaster Mode also included voice acting. The board game features detailed visuals that are well represented graphically on screen. Dungeons, mercenaries and enemies have great looks and animation that gives life to the models used in the tabletop game, while the map contains the essence of the board tying it all together in a very pleasing way.

Gloomhaven offers hours of mental challenges with a sophisticated battle system. It is based on a board game but tries to go beyond that. Those already attracted to the idea of Gloomhaven can have it here for less assembly and with an additional Guildmaster mode. Since this digital version becomes tiresome after a while because the vast number of missions ultimately feel repetitive, it’s better to play in small doses. The game is recommendable, but probably playing it online with friends in co-op mode is closer to the original’s experience.