Trying to play through Ganbare! Super Strikers turned out to be a more arduous task than I had expected. For one thing, I made the mistake of playing the Vita version, which first suffered from annoying, yet bearable, technical problems before culminating into the game crashing in my first World Cup match in Story Mode. This resulted in having to restart the game from scratch on the PlayStation 4. For another, while the game’s tactical RPG take on soccer has some initial novelty, it wears off pretty quickly, and the experience as a whole lacked substance to keep it engaging.

In Story Mode, players create a character, name their soccer team, and make the team emblem. Once that’s done, the basic mechanics of the game are introduced through an optional tutorial before the player can start the first out of seven National Cup matches, which are then proceeded by the World Cup matches. As one might expect, the objective is score goals with their team while preventing opposing teams from doing the same within a time limit that clicks down for every turn from either team, with twenty minutes on the clock representing the same number of turns. Winning allows the player’s team to move on to the next match. Winning grants up to three stars; one automatically gained from winning the match and two more that are obtained by meeting certain requirements such as scoring three or more goals, preventing the opposing team from scoring, inflicting status ailments, or not using any special abilities during the match. Players use these stars to obtain additional equipment to give teammates access to special abilities or stat boosts.

During the actual matches, the player will need to keep track of several elements. Each teammate has two gauges: SP and AP. The SP gauge is depleted every time a teammate moves around the field or takes an action. Once it runs out, said team member will become fatigued and have his stats reduced, which is a potential hindrance, especially if it occurs to multiple members. On the other hand, the AP gauge depletes when a teammate uses a special ability, such as one that inflict status ailments or aids a member of the player’s team in either tackling or dribbling the ball past an opponent, making it wise not to use these abilities so frivolously. 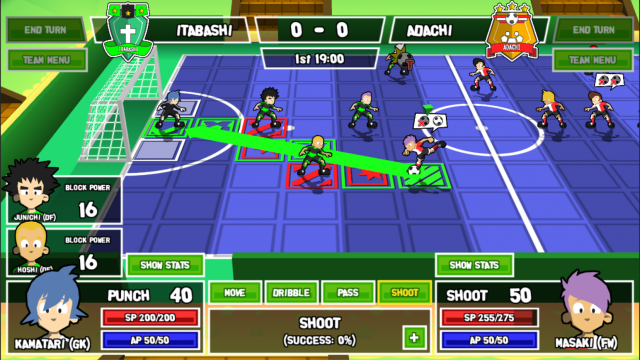 He doesn’t stand a chance of scoring from there.

Another thing to keep track of is the positioning of the other players on the field on both teams. Opposing teams will do their best to take the ball away if the player is not too careful with the positioning of their teammates. Each squad member can take up to two actions per turn, which can be used to moving around the field, attempt to score a goal or use any kind of ability. A curious and bizarre design decision is only letting the player’s team attempt to tackle a member of the opposing team once per turn, while this limitation doesn’t apply to the AI-controlled opposition. This may well have been done to make sure it wasn’t too easy for the player to gain the upper hand, but it’s indicative of one of the game’s most glaring flaws: the difficulty curve of the matches are incredibly uneven, especially early on.

The player’s team lacks a lot of the special abilities available to the opposing teams, especially during the first few matches when team members are generally underleveled compared to their opponents. Because of this, replaying matches are often a necessity in order to grind as well as to complete the optional objectives to get the equipment needed in order to obtain these special abilities. Not helping is that since the opponents’ levels and stats aren’t displayed, and in the end winning matches requires a degree of trial and error. The balancing does even out a bit as teammates level up and gain access to special abilities that prove useful, but being victorious involves some luck even with the best strategies, especially if the match ends in a draw, in which case overtime is required. If the tie is still not broken, then both teams enter a penalty shoot-out, where players take it in turns having shots against just a goalkeeper until one side is declared the winner in what amounts to a game of chance.

Every action taken has a percent chance of succeeding, with special abilities increasing the percentage of success. The minute-to-minute strategy during matches is often choosing between a regular action with a risk of failure, or a special ability with a decreased risk of failure at the expense of consuming valuable AP. Much like the real thing, it is incredibly frustrating to put so much effort getting close enough to score a goal only for it to end in failure. Risk of failure also plays out when one teammate is trying to pass the ball to another, dribble the ball past an opponent, or take it away with a tackle, though thankfully the chances of these actions succeeding are visible to the player. The AI generally act in predictable ways that make it relatively easy to gain an advantage over them provided the player has sufficiently leveled up their teammates, which can unfortunately make matches pretty dull and lacking in any excitement or suspense. 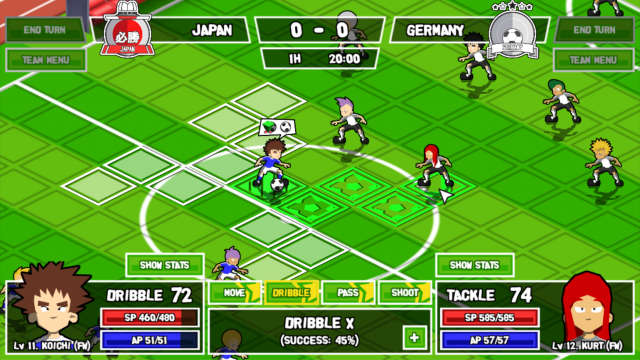 It’s possible to play this isometrically but it’s not advised.

By default, the game’s camera is set in a slanted top-down view. Though it can be switched to an isometric angle in either direction, the diagonal controls don’t adjust to accommodate for this, so it’s generally best to keep it in the default position. The exception is when players lose track of the ball, which can unfortunately happen when several members on either one or both of the teams crowd around each other or the team member who has it is being blocked from the player’s view.

Ironically, Story Mode doesn’t really have much of a narrative through-line and is lacking in characters of note. Players that consider those elements a necessity in this kind of game will have to look elsewhere, as what could charitably pass as a story is extremely barebones and limited to a few canned, wooden lines of dialog between team captains before and after every match. Most of the other teammates have no lines and are pretty much chess pieces that happen to have distinct names, character portraits, and sprites. This isn’t a fatal flaw yet it’s hard not to get the feeling that something is missing due to a lack of emotional investment. 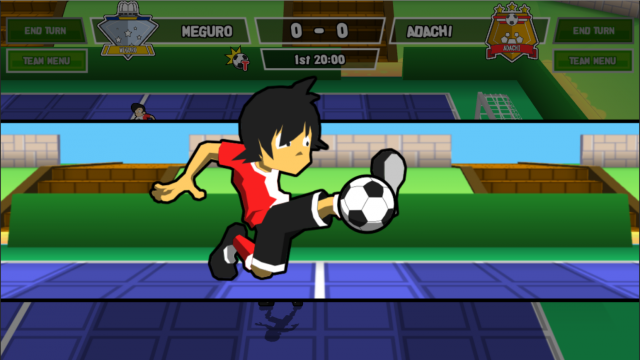 Well, they do say “Break a leg!” when wishing someone good luck.

Ganbare! also features an Arcade Mode, which is functionally a multiplayer mode more than anything. Three different mode of play are available such as Quick Match, where a player can either compete against the AI or another player, as well as Tournament and League modes where up to eight players can compete with each other to see who comes out on top. These modes can be played single player but there is very little reason to as playing against the AI loses its appeal very quickly, especially as they don’t have any advantages that would make them challenging. There’s also no guarantee that the multiplayer options would sustain one’s interest unless players find the base game mechanics enjoyable.

The game’s presentation never rises above being merely functional, with the soccer fields having minimal detail with simplistic texturing. Character sprites serve their purpose well enough without particularly standing out, and the cut-out animations that play when attempts are made at scoring goals or tackling an opponent do a decent enough job of adding some oomph to the proceedings. The sound is underwhelming across the board, with music being a dull drone that fails to create excitement during matches and sound effects that are lacking in punch thanks to weak sound quality that makes it sound like they were recorded underwater.

Combining tactical RPGs and soccer is a good idea that could be further developed and improved upon, but Ganbare! Super Strikers really misses the mark in execution. The lack of substance that prevents the game from soaring once the novelty of the premise wears off and the flaws in the balancing become noticeable. As someone who generally prefers to play games single-player, the game failed to impress and I doubt this will hold much appeal in the multiplayer department for anyone who isn’t already a hardcore fan of both soccer and Tactical RPGs.