Do the audiences of witty, dialogue-driven RPGs and devourers of dungeon crawlers overlap much? It seems an odd combination to make, but Rampant Games has delivered Frayed Knights: The Skull of S’makh-Daon, which succeeds in the aim of administering a more humorous version of something that could otherwise appeal to lovers of The Dark Spire. Whether it will appeal to anyone outside that niche is difficult to determine, since accessibility to gamers who might not necessarily enjoy brutal dungeon delving was not a core component in the game.

Frayed Knights‘ core combat is the standard turn-based affair seen in a great many dungeon crawlers, complete with absurdly randomized turn order which sometimes sees the same participant acting twice in a row. The four protagonists, Arianna, Chloe, Dirk, and Benjamin fulfill the standard roles of warrior, mage, thief, and priest in their battle application. The game doesn’t stick solely to random battles, however, instead having a number of set points in the dungeons at which enemies must be fought, and a pleasantly low encounter rate elsewhere. Set encounters cannot be escaped under any circumstance, but random ones can. The penalty for doing so is a fairly substantial one of booting the party back to the entrance of the current dungeon though, making this a bothersome burden. Either making a long trek back through the dungeon will be required, or slugging it out in a time-consuming fight is necessary.

Battles are time-consuming because, in the grand tradition of games that emulate pen & paper role playing a bit too much, Frayed Knights employs invisible dice to determine the success of every action in combat. This means that attacks can, and do, miss the enemy with alarming frequency. Though enemies are also affected by the invisible dice, the result of this is usually to drag combat on for a long time, with particularly painful moments coming when spells that affect multiple targets and have a chance of hitting in the low nineties miss everything, which does happen. When characters do manage to hit the enemy, the damage they deal is also randomized, and while a certain mindset might find it funny when a priest inflicts considerably more pain than a warrior on some turns, such unpredictability just makes fights take even longer. Weak enemies that are no threat to the party still take at least a couple of turns to eliminate, though equipment and levels do alter the danger zone. 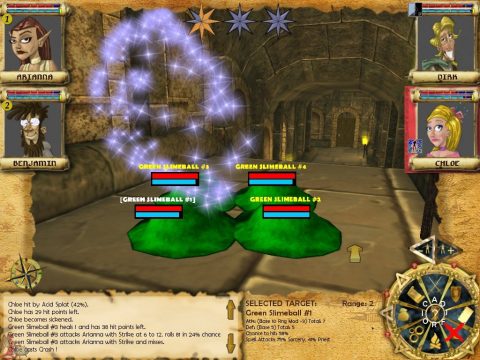 Slimes don’t take to heat well in the slightest. If that’s not an option, get ready for a long fight (like usual).

Frayed Knights sets itself aside from the dungeon crawling pack with its Endurance mechanic, which replaces the standard use of magic points. Doing anything, from basic attacks to complex spells, takes away a bit of endurance from a character. If that character’s endurance reaches zero, he or she is compelled to sit out a round in combat to replenish it a bit. The option to rest and recover endurance is always available, though doing so in combat doesn’t replenish very much and doing so outside battle might result in some enemies barging in on the slumbering party. The catch to endurance, which in some respects is preferable to a standard MP system, is that its maximum value decreases over time. The only way to get endurance back up to its optimal level is by returning to town and sleeping. Keeping endurance at its highest level fortunately isn’t necessary, but trying to finish a dungeon is quite aggravating when multiple turns in battle require characters to rest instead of contributing directly toward the demise of enemies.

Setting Frayed Knights distinctly apart from the dungeon crawling pack is its Drama Star system. Occupying the top center of the display at all times are three octagonal stars that gradually fill through multiple colors as the party beats enemies, opens doors, delivers items, and other standard parts of dungeon crawling. As the Stars fill, they can be used to help immensely in battle, granting such favors as revival of the incapacitated or group healing and status cures. They can’t be relied upon consistently due to the length of time filling the Stars requires, which is definitely what the developers at Rampant wanted. The one aggravation in the system is that reloading after a game over means all Drama Stars are gone, which is supposed to encourage using them in a tight spot, but can’t make up for the time it takes to reacquire the necessary points from the beginning.

Unlike many dungeon crawlers, Frayed Knights has absolutely no restrictions on inventory space. Considering the huge quantities of items that will be awarded through the game, this is quite fortunate. A moderately bothersome issue is the need to have special spell stones in the inventories of mages in order to use their more powerful magics, especially when the stones are consumed with one spell cast. Characters often need to have the correct skills in order to equip gear found along the way, and will suffer penalties to their core abilities with the wrong equipment in place. The game is thankfully clear about this.

Frayed Knights tosses a few points at each character for each level gained, and these can be applied towards a variety of customization aspects. Changing the equipment characters can use is just the beginning, as they can learn a gallery of abilities ranging from the enhancement of magic potency to significantly slowed endurance buildup. Leveling is very slow in Frayed Knights, forcing careful thought about what to use the painstakingly acquired points for, but the result is surprisingly addictive and enjoyable. 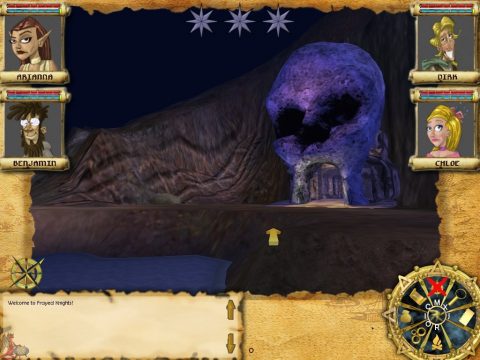 Revealing that giant skull takes a lot of work – don’t expect to see it until very late in the game.

When it comes to its story, Frayed Knights errs on the side of the relatively mundane, and comes across the better for it. Its title refers to the aforementioned quartet of adventurers, whose bid for membership in the Adventurers’ Guild has been thwarted by Benjamin’s unwise nighttime dalliance with a member of another group, leading to their quest’s objective getting snatched early. The goal at this point is to acquire the Skull of S’makh-Daon, which turns into an even longer quest once an incredibly good thief happens upon it. A quest to aid an ousted goblin leader takes up a notable chunk of the narrative afterward, which leads to sobering hints of a gigantic alliance comprising all nonhuman races. The ground is left open for the follow-ups Rampant is developing, but without impoverishing this game in any way.

The dialogue uttered throughout the game is a highlight, though some sneaky typos are bothersome. The party members have things to say about most aspects of their adventure, and most of them are at the very least smile-worthy. Whether investigating a farmer being impersonated by intelligent rats, falling into a stored pile of minotaur droppings, or constructing a magic key out of paper in a parallel dimension, the party’s dialogue is amusing quite often.

Frayed Knights won’t win any awards for its visuals or audio, nor is it trying to. The graphics reuse a lot of textures, but steer clear of becoming too unappealing, and the sight of enemies attacking makes up a bit for the invisibility of the protagonists throughout. As for the audio, none of the compositions except the one in the parallel dimension are incredibly catchy, but there’s enough of a variety to keep things from getting monotonous.

Being able to save anywhere certainly helps keep the difficulty from getting overbearing. Enemies encountered not too far into the game are quite capable of hitting multiple party members, and certain nasty foes like to use attacks that deal double-digit damage to every character. In a game where nothing ever has hit points in the triple digits, it makes a taste for punishment necessary when playing, in addition to the constantly infuriating random elements. Frayed Knights delivers quite a bit of content, since many areas that initially seem optional are actually mandatory in order to open up the final dungeons, turning it into a game that meets Rampant Games’ prediction of thirty hours or more to complete.

The Skull of S’makh-Daon undoubtedly delivers exactly what it promises. Amusing dialogue and situations aplenty will be found wrapped inside a laborious dungeon crawler that tosses invisible dice around to determine everything inside of battle. The application of excessive randomness has never pleased me, so this element outweighed everything else, particularly considering that dungeon crawlers require very large doses of combat. Conceivably it might strike some out there as the greatest thing since sliced bread, and anyone like that should flock to Rampant Games’ site in order to buy the game immediately.