I have to admit, I’ve never been quite so divided on a game before. Whenever I play a game for review, I tend to keep a rough, running score in my head that fluctuates as the game improves or weakens, but Fragile Dreams ~Farewell Ruins of the Moon~ has been one of the few cases where I’m really not sure where I stand. In fact, I can’t even take the easy way out and try to predict where other people will stand, because this is a game whose enjoyment factor is intrinsically tied to its aesthetics. Ultimately, how good Fragile is depends entirely on your ability to overlook its deliberately lackluster game mechanics — and the keyword there is deliberate. How can I explain?

Fragile Dreams puts you in the role of Seto, a fifteen-year-old boy who, up until recently, had been living with an old man in a run-down observatory. He and the old man were survivors of some sort of disaster that killed nearly everyone on the planet, and ultimately, time claimed the old man as well. Now alone, Seto follows the advice of a letter left to him by his guardian, telling him to search for survivors in the tower that can be seen in the distance. And so Seto leaves his home of fifteen years, determined to find someone — anyone — to share his life with. During his travels, he encounters a silver-haired girl who runs off before he can speak with her. Having found another human being left in an otherwise empty world, he sets out with a steadfast determination of finding her.

Seto’s journey deals with many themes, but chief among them is loneliness, and the stark, barren, and forgotten city that you travel through does wonders to make sure this hits home. Everywhere you go, the city is crumbling from years of neglect. Railings and catwalks are rusted over, concrete is cracked and water-stained, and slowly but surely plant life is taking back the outdoors. And the world is silent, too. Not even background music plays as you explore the once-bustling ruins of Japan.

While the design of the world ensures that one truly feels alone, other elements ensure that an entirely unsettling feeling washes over you. For instance, the walls are lined with graffiti, and the messages they bear are more than a little disturbing. This really hits home once you acquire the special flashlight, which reveals hidden messages that are otherwise invisible. Some of these are the most unsettling in the entire game, holding anything from cries for help, disbelief, or even threats. Reading a message that screams “Die!” at you before descending down an extremely deep maintenance shaft is a rather unnerving experience. 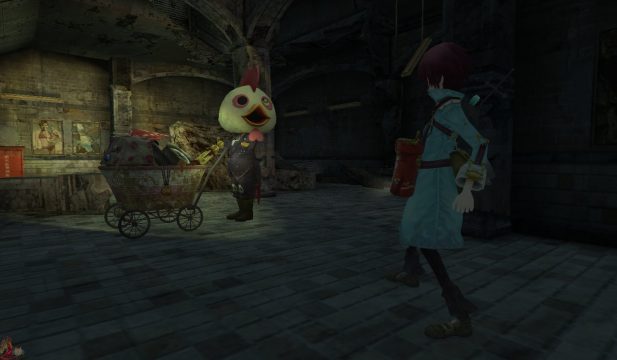 This creepy, chicken-headed merchant will show up sometimes to sell you the weird scrap he collects.

The unsettling feeling is heightened by the fact that you’re never quite sure what happened to cause this disaster. But as you explore the world, graffiti drawings, newspaper clippings, and other clues start to point you towards the truth, albeit very slowly. Most significant, though, are the memory items you find hidden in the ruins. These items are everyday objects that now contain the last memories of their now-dead owners. The memories play out in the form of short stories, similar in nature to Lost Odyssey‘s “Thousand Years of Dreams,” and while most are completely unrelated to each other (though a few are connected to form a more complex story over multiple items), almost all of them share one important aspect: every one of these people knew they were going to die. With each new story, the unnerving feeling grows stronger and stronger.

The memories are probably one of the game’s strongest points. While many are simple one-shots that offer interesting and occasionally amusing insights on various subjects, others are surprisingly complex short stories that offer much more poetic tales. The most impressive is an eight-part memory about a girl who discovers the bodies of six other girls who were cruel to her, and seeks to get revenge by stealing their identities. The story is dark, gloomy, surprisingly touching, and incredibly well-written. A careful choice of words and some fairly subtle foreshadowing ensures that the ultimate twist is expected, but satisfying. It was by far my favorite of all the ones I discovered.

The game’s weakest points, unfortunately, are mechanical, most prominently the combat system which is as basic as action-RPGs get. Seto has a weapon, and he can hit enemies with it; there really isn’t much more to tell. It’s how the combat is presented that makes it truly interesting, as it’s designed entirely to add to the game’s atmosphere. As Seto explores, he’ll run into ghosts, but before he sees them, he’ll hear them, with the sound coming through the Wii Remote’s speaker. These creepy, haunting sounds get louder as he approaches the source, at which point a ghost may appear. I say may, because another aspect of combat is that the ghosts you fight are, in most cases, initially invisible, until you shine your flashlight on them, which is controlled by pointing the Wii Remote at the screen. This also controls the camera.

Interestingly, the lackluster combat seems to be very deliberate, and the way the game is designed makes it clear that the combat is not the primary draw. Enemies do not appear randomly, instead only showing up in predetermined locations. Furthermore, they will not extend past their designated areas, evaporating once you get far enough away. Defeating enemies and even bosses is fairly rapid and easy, and it becomes apparent that even these are just there to enhance the atmosphere. 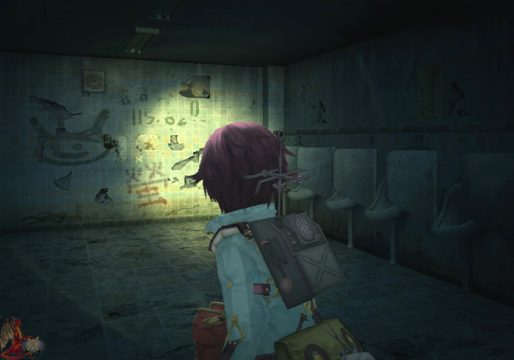 The graffiti covering the walls of the game is terrific, but unfortunately not all of it has been translated.

The inventory system, on the other hand, cannot be overlooked so easily. Deliberate or not, it’s an irritant that really doesn’t need to be there. Inventory space is limited, and larger items take up more room. At the very least, your inventory will have to contain your flashlight and a weapon, which already takes up a solid three slots. However, weapons also break as you use them, oftentimes seemingly randomly, which means a backup weapon is almost always necessary. That’s five slots. Add in an emergency healing item and you’ve already filled up half your initial inventory. As the game progresses, your inventory expands slightly, but it’s never really enough, and there will always be times where you have to head back to a bonfire — Fragile Dreams‘ save points — to clear out unneeded items. There’s also a merchant character that appears sometimes, but how often and when he appears seems to be fairly random as well.

But despite the weak elements in the gameplay, my biggest gripe with Fragile Dreams actually comes from the localization itself. Specifically, it seems incomplete. As I mentioned before, there is a large quantity of graffiti scribbled on the walls throughout the game, but what I didn’t mention is that it’s all in Japanese. Although much of this has been translated using subtitle boxes when you shine your flashlight on the text, there’s also a lot that isn’t. Everything vital to playing through the game is translated, but when exploring the game’s various areas, you will inevitably come to some text you won’t understand. What’s more, as Seto explores, he hand-draws a map in pencil crayon to track his movements, adding doodles and notes whenever he comes across something interesting. Again, only some of the text he scrawls on his map is translated, while the rest is still in Japanese. While these bits of text are unlikely to be important to the story or the overall game, it’s disappointing to think that you might be missing something.

As far as Wii games go, Fragile Dreams is definitely one of the most attractive out there. Although the technical limitations of the Wii lead to a fair number of jagged edges on a high-definition screen, the art direction is fantastic, and the game’s major story events are punctuated with beautifully stylized animated scenes featuring a silhouetted Seto with blank eyes.

The sound, as mentioned before, is used brilliantly, and what little music there is in the game is equally terrific. Unfortunately, the voice acting is mostly mediocre, though it does have moments where it shines (and thankfully it’s during the most important scenes). Fragile Dreams includes the Japanese voice-acting for those who want it, but after listening to a handful of memory items in both English and Japanese, the quality is pretty comparable. When it’s at its best, the voicework is very good, but more often than not, it’s passable and occasionally grating.

So what does it all come down to? Is Fragile Dreams good or bad? The game can be completed in roughly ten hours, but I spent sixteen thoroughly scouring creepy hallways and empty buildings for clues to this ruined world’s collapse. So, did I enjoy Fragile Dreams? Overwhelmingly, yes. Will you? I don’t know, and that’s the honest truth. This really is a game you’ll have to try for yourself and see.