The Game that Started the Franchise

Despite its popularity, the Fire Emblem series remained a Japan-exclusive for over a decade until the seventh game was released on the Game Boy Advance. Developer Intelligent Systems originally took the strategic elements of Famicom Wars (the series that western audiences first saw under the title Advance Wars) and added some RPG ingredients to the mix to create what is now known as Fire Emblem: Shadow Dragon & the Blade of Light. The game was remade on the Super Famicom as the first half of Fire Emblem: 紋章の謎 (Mystery of the Emblem), then on the Nintendo DS as Fire Emblem: Shadow Dragon, which updated the interface, mechanics and presentation. With the official western release of original Famicom title on the Nintendo Switch, players can now enjoy the original game in all its retro glory, along with a fully-translated script and a few quality-of-life enhancements added for modern convenience.

The story revolves around the resurrection of the Shadow Dragon Medeus, who invaded the continent of Archanea a hundred years ago but was defeated by the the divine sword Falchion. Now together with the evil wizard Gharnef, Medeus overtakes the kingdom of Altea. The Falchion is stolen and the kingdom’s prince, Marth, barely escapes with a handful of knights to take refuge in the island nation of Talys.

Players take control of Marth in Talys to assist the King in repelling a pirate invasion. From there, Marth sets out to recover the Falchion and defeat Medeus, recruiting allies and defeating enemies along the way. Like many games of 1990, the story is barebones and relegated as a backdrop to the battle system. The characters who join are very shallow and, beyond their initial dialogue scenes, do very little except act as army units.

Combat, the meat of the game, is done by the player and enemy alternating turns on a map. During the player’s turn, he or she can move units, attack enemy units, or explore houses or fortresses to talk to locals or shop. The enemy can do the same on their turn, but some units like pirates can steal chest or destroy towns. Each stage covers a map of a particular area, and the player must defeat a boss unit to advance to the next map. The game is over if Marth dies in battle, with there being 25 stages in total to work through. 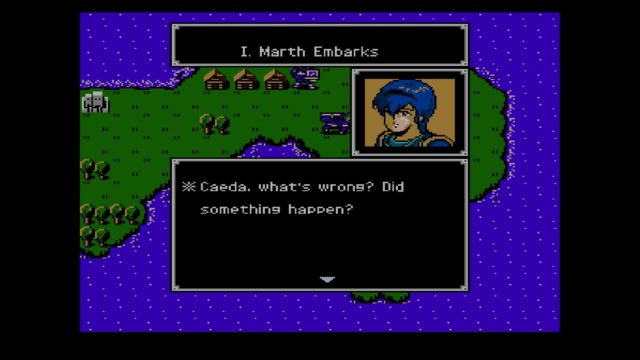 Fire Emblem: Shadow Dragon & the Blade of Light combat includes the familiar rock-paper-scissor formula with RPG elements thrown in. There are three types of melee weapon users, each having a strength and weakness, forming a weapons triangle: Lances have an advantage over swords, swords have an advantage over axes, leaving axes strong against lances. Archers, mages, and flying units add to the complexity with their own strengths and weaknesses. Each unit levels up after earning 100 experience points through individual actions in combat, resulting in stat increases and the ability to promote to a more powerful class once reaching level 10. Despite the variety of classes, there is a huge balance issue. Some unit types get poor stats and cannot be promoted, and others have amazing stats that make them the obvious choice to bring along. Powerful units like Marth can easily level up by winning battles, whereas healers get experience points by getting attacked, a fact which will leave them severely underlevelled unless players want to spend a painful amount of time grinding.

Besides having the right units, proper placement is one of the most important factors in this game, because its very easy for enemy units to gang up and kill the player during enemy turns. Moving slowly and cautiously helps prevent this, but if the player takes too long, the enemy will destroy towns or get more reinforcements, so there is a fine line between taking too long or moving too fast.

One aspect of the Fire Emblem series that has stuck around is permadeath, which originated with this game. If a particular unit falls in battle, then he or she stays dead, which adds a lot of tension to the game and forces players to make more calculated decisions. The permadeath really hurts when the player loses a valuable character, and luck can sometimes mean that a unit falls despite having a significant advantage. It is easy to see why the long-standing permadeath feature of the series turned a number of players off and why it has been made optional since the DS games.

Of course, this version offers players a few modernised options, one of which is the the ability to rewind a turn. Therefore, if a given unit falls in battle, then players can rewind to avoid this mistake. Even though it rewinds back a whole turn, this feature is much more welcome than having to reload the last save, which would usually be at the beginning of the battle. There is also a new bookmark feature, which acts as a save state, so players can revert back to it to achieve a desired outcome. The only drawback is that players can only utilise one of these at any given time. 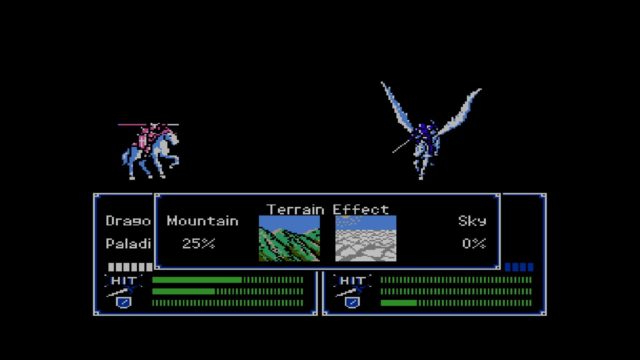 Class and terrain affects how battles play out.

Another welcome addition is the speed up option, which doubles the speed of how the turns and battles play out. This can be applied to either the player’s or the enemy’s turn, and it definitely speeds up the pacing of this game, which is slow and repetitive. Watching the same battle animations play out over and over again becomes a slog, so having the option to speed through them helps. Unfortunately, this option also speeds up the music, which sounds horrible on double speed.

Yet, even with these gameplay enhancements, Fire Emblem: Shadow Dragon & the Blade of Light shows its age. When it comes to combat, there is no way to see the movement ranges for units, so players will have to manually calculate the ranges themselves. An even worse problem is item management. Each character can only carry four items, which can only be transferred on the map and not between stages. Players can use the convoy for item storage, but its location varies on each map and is very inconvenient, and worst of all, players have to pay to store an item. Therefore the whole process of buying, transferring, storing and retrieving items is excruciating, and it detracts from the overall joy in the game.

The graphics aren’t beautiful by any means, even for 8-bit standards. The repetitive use of the same tiles becomes stale throughout 25 maps. Though there is enough variation in the map designs to give each location a slightly different feel, the game does not feel much different from the beginning stage to the final stage. The battle animations have two jagged character sprites trading attacks over a black background and just look awful, even for NES standards. Some of the music is not bad, and the melodic chiptune of the opening still sounds good as ever. Other tracks do loop repetitively, unfortunately, and they sound much worse when utilising the speed up option.T

Fire Emblem: Shadow Dragon & the Blade of Light may have been a decent game from 30 years ago, but even with the added quality-of-life improvements and a good translation, it has aged more like mouldy bread rather than fine wine. It still has a good strategy system and is playable overall, but there are loads of better games, including just about every other Fire Emblem game in existence. This is definitely not a game for newcomers, but die-hard fans of the Fire Emblem series may find enjoyment, along with gaming historians who simply want to experience a time piece of how the whole tactical RPG franchise started.