Microids announced it is producing a physical retail edition for Forever Entertainment’s Front Mission 1st: Remake. Microids’s limited edition will include a physical copy of the game for Nintendo Switch, an exclusive lenticular, a printed game manual, and two lithographs. It will release in Europe in spring 2023, with pre-orders now open, and in North America in summer 2023. 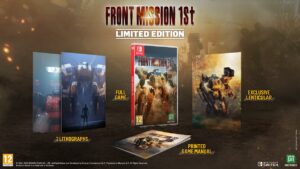