The story in Front Mission occurs on Huffman Island, a fictional territory located in the Pacific which is in perpetual dispute between the United States of the New Continent (USN) and the Oceania Cooperative Union (OSU), both vying for control of the land for its geopolitical resources. Before the events of the game, simmering tensions led to the 1st Huffman Conflict, with the island ultimately bifurcated as a result of the war. As the dysfunction between the two factions ebb and wane over the years, an event known as the Larcus incident occurs on June 3, 2090, sparking the 2nd Huffman Conflict. The game begins during the opening hours of the Larcus incident.

The story sees players assume control of OCU Captain Royd Clive during a mission in the Larcus District. Upon arrival, Royd’s squad is ambushed by an enemy group. The theatrical leader of the enemy squad, Driscoll, destroys the Wanzer (“Walking Panzer”, otherwise known as the large mechanical robots each character pilots) operated by Royd’s fiance, Karen, presumably killing her. The enemy group destroys the factory located in Larcus, with the USN using its own attack as a pretext for initiating the 2nd Huffman Conflict. The OSU discharges Royd and his cohort from the military as a result of their involvement.

The story resumes a year later, where Royd has been spending his time in cage matches to forget about Karen’s death. Royd is approached by OCU Colonel Olson, where he is recruited to lead a mercenary group known as the Canyon Crows. While disillusioned at the notion of working for the same military that unjustifiably exiled him, Royd is eager to swallow his distaste in order to hunt down Karen’s killer. Newer to the game is an opportunity to play through a second scenario from the perspective of USN Officer Kevin Greenfield in a storyline that begins before the Larcus Incident and throughout the timeline of Royd’s scenario, providing new revelations as well as a chance to experience this modern warfare through the perspective of the other side. 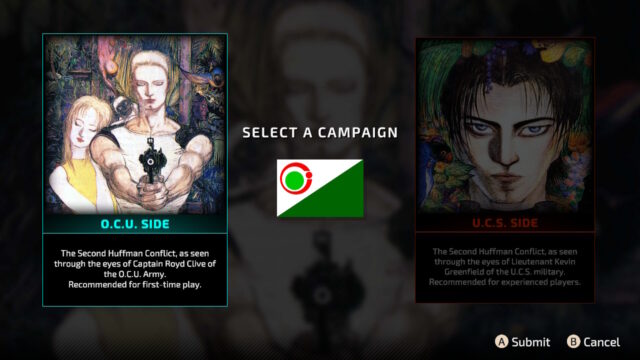 Players are given the choice between two campaigns representing each side of the conflict.

As the ranks of the Crows grow, Royd bears witness to the horrors of modern warfare: old friends who’ve been scarred by war; offers of aid giving way to duplicitous intentions; and a growing body count on each side of the war when the two factions are fighting over something with implications far more sinister than what appears to be just a simple strip of land in the Pacific. The story grapples, even if tangentially, with the effects of nationalism in wartime through the lens of this global conflict. These themes are a welcome departure from the types of high-fantasy politicking frequently experienced in the genre, an aspect even more fascinating when considering this is a twenty-seven year old story being told. Not only is the subject matter fascinating, but so are the corresponding environments. There is something enthralling in watching Wanzers glide across a highway, laying waste to other tanks in the middle of an urban downtown.

Royd and his colleagues may be the humans at the center of this conflict, but it is these Wanzers that are the true stars. Front Mission eschews formal jobs in favor of comprehensive customization of the Wanzers and the pilots who operate them. Players can to customize their Wanzers in nearly every aspect: not only are weapons interchangeable, but so are the parts, computer drives, paint, and more. Pilots can expect to spend hours customizing their Wanzer, careful to keep the mecha’s weight balanced, or else they will be too heavy to move.

In battle, players move individual units around a grid-based map, with different types of terrain providing various levels of cover or camouflage. Once an enemy unit and corresponding weapon has been selected, the game launches into a battle sequence between two Wanzers. Each unit has a corresponding health bar for the machine’s body, bilateral arms, and legs. While there are benefits to disabling the other body parts – namely impeding movement or rendering certain weapons inoperable – in order to fully disable or destroy a unit, the hit points of the body must be depleted. At the onset, players are not given the ability to specify which body type to target, leaving the initial series of battles feeling somewhat random and making it difficult to plan any more than a step or two out. While units eventually can choose a skill that allows targeting of specific body parts, it still feels somewhat imprecise. While this imprecision can lead to some nail-biting situations, it more commonly leads to players needing a few extra turns to destroy each enemy unit. During maps with nearly a dozen enemies, this becomes a chore. 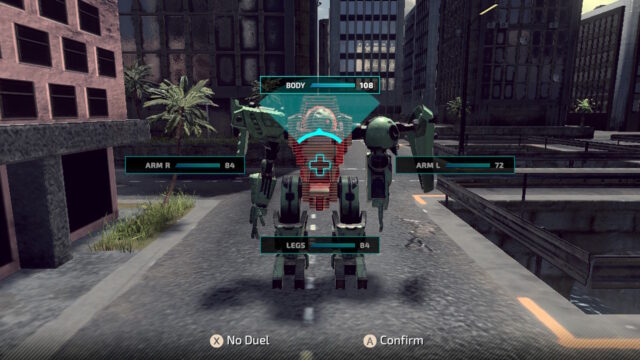 Most units are eventually able to target specific parts of each enemy wanzer.

There are no formal character classes, but each pilot levels up separate ranks for melee, short and long range weapons, as well as a dodge statistic. The game openly encourages players to capitalize on individual unit’s strengths as they level, showing preference for particular weapon types. Following this recommendation allows some units in particular to become high-powered and effective during story missions and in the Arena, where units can fight in one-on-one encounters for cash and other objectives.

There is no denying this is graphically the most sophisticated version of Front Mission 1st, as prior iterations were all built from the original 1995 release. While this version is essentially a 1:1 remake, the graphics have been upgraded, even if they do look a bit plastic. While the nostalgic, 16-bit charm is gone, there are some nice flourishes present as water flows through rivers in the jungle, and lights from parked cars twinkle in the skyline in stages set in the city. The Wanzers themselves are impressive looking during outfitting. During battle itself, however, the Wanzers look a little too small, giving off a less-than-menacing impression from the battlefield. Battle sequences are well executed, with missiles and sparks flying between units. Character art from Yoshitaka Amano is well-drawn and evocative of his other work from the Super Nintendo era.

Musically, players are treated to the original score as well as a remastered version, both composed by Noriko Matsueda and Yoko Shimomura. The soundtrack is intense and appropriate, with excitable battle tunes and morose songs to match the tenor of the proceedings. The modern arrangement provides refreshed takes on the decades-old soundtrack, although there is no loop present in the soundtrack. The end result is a few seconds of dead silence every ninety seconds as the track resets. This happens in battle, while shopping, or even perusing the menu, with such frequency it is both confounding and annoying. Fortunately the soundtrack is strong and urgent enough to overshadow this easily patchable issue. Voice acting is also missing from this remake, another design choice which seems at odds with the efforts made to modernize the presentation of the game. 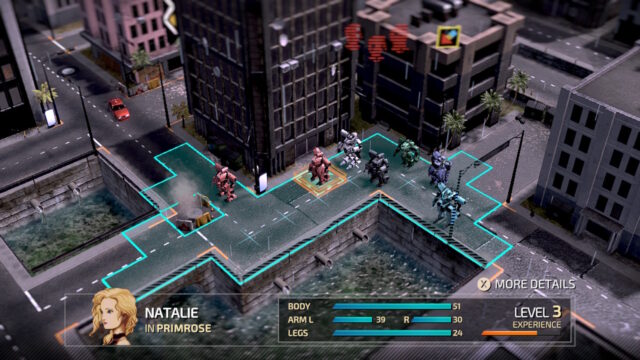 Environments are crisp and finely detailed renderings of the original maps.

Front Mission 1st: Remake provides players the option to play with a classic or modern presentation. In classic, the camera is fixed in the same perspective as the original Super Famicon maps, while the modern option allows for players to move the camera at will. Playing in classic can be a bit awkward, especially during times when units are obfuscated by debris or buildings and the camera cannot be moved. The soundtrack modes can be toggled at will, and it is a joy to be able to switch back and forth to truly appreciate both arrangements. Likewise, the ability to alternate between classic and modern presentation is appreciated. There are at least seven difficulty options, ensuring players of all skill type are able to tweak the difficulty to their liking.

For as many times as Front Mission has been remade, it’s a shame more thought has not been put into how to modernize this remake for modern audiences, especially at a time when strategy RPGs are flourishing. Wanzer movement and battle sequences can be toggled on or off, but there are no options to increase the speed. Likewise, navigating through the menus for inventory or equipment management is antiquated. Including an auto-equip option for the units, players will recruit would also modernize the experience for those seeking to spend less time micro-managing in a sea of menus. While some purists may decry modifications to these systems, ultimately failing to refine them to reflect modern tastes — if not to acknowledge the developments in the genre over the last nearly thirty years — feels like a sorely missed opportunity to reinvent the series as it stands to gain traction with a global audience.

Front Mission is a venerable SRPG series that appears to be turning a corner in the West. Front Mission 1st: Remake is a solid effort at remaking the first game in the series without modifying too much of what makes this game a classic. With announced remakes of Front Mission 2 and 3 forthcoming, it is an exciting time to be a Front Mission fan. While more effort could have been taken in actually modernizing and upgrading the game’s mechanics for modern sensibilities, Front Mission 1st: Remake preserves the integrity and depth of the original’s complex systems, even if these metal joints are starting to feel a bit rusty.

Disclosure: This review is based on a free copy of the game provided by the publisher.
(Editor’s Note: The introduction has been adjusted to account for a dating error on the release of Front Mission 3.)