In the days when the PlayStation 2 was young, SquareSoft developed a new Final Fantasy for it. Many things about Final Fantasy X were borrowed from earlier games in the series, and many were new at the time. The influence of the game was enormous, ushering a new era of cinematic RPGs into being. X‘s influence and its quality are not necessarily correlated, but the game beneath all the extraneous elements is quite good indeed.

Combat in Final Fantasy X is a remarkably good use of turn-based maneuvering that stays interesting all the time. Three of the game’s seven characters can be onscreen concurrently, but a button press will allow the player to swap them with any of those currently on the sideline, ready to take an immediate action. A gauge on the top right of the screen constantly displays the turn order, allowing careful planning of the right actions to take place. Each character also has individual aptitudes, and cycling them during battle will often be necessary so that enemies can be dealt with in the most efficient manner. Status ailments play a large role in the combat, and inflicting them upon enemies is extremely helpful at times. Quick, easy to understand, and enjoyable to partake in, Final Fantasy X‘s combat is a definite highlight.

The Sphere grid, the means by which characters improve their attributes, is also a highlight of the game. Ability Points are awarded after killing enemies to all the characters who acted in the battle, and those Ability Points translate into gaining Sphere grid levels. Unlike the traditional experience point system that simply assigns statistics when a character gains levels, the Sphere grid requires quite a bit more involvement from the player to navigate its nodes. The process plays remarkably like a board game, with characters moving along set paths for awhile but being able to unlock new notches as key items are acquired to do so. Traveling the Sphere grid is time-consuming but quite addictive, and is an excellent means of improving characters.

The game’s story, on the other hand, is a decidedly mixed bag. Its core tenets, that a young man named Tidus has been sucked 1,000 years into the future, where the world is constantly being threatened by a recurring nightmare called Sin that can only be temporarily defeated by Summoners, are solid and interesting. Some of the tangents the story takes are interesting, others are inscrutably baffling. The idea that Blitzball would be the only entertainment in all of Spira comes to mind as an incredibly implausible notion, but it is far from alone in the game’s world. 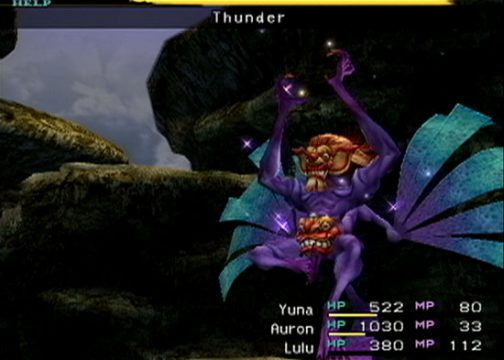 Who is this masked, flying man with peacock plumage for wings?

Related to the story of Final Fantasy X is its voice acting, a notoriously ticklish subject. The actual performances are variable in quality, though Yuna’s should be singled out for its wooden nature. Glaringly prominent is the terrible lip syncing of Squaresoft’s, however, which accomplishes the amazing feat of making old Godzilla and kung-fu movie dubs look professional. This atrocious matching of the audio to the video deserves a special demerit.

Otherwise, X‘s audio is very good. Nobuo Uematsu’s score is often more like something from a film than a video game, for the very good reason that it was meant not to drown the vocals of the characters, but that makes certain tracks unremarkable. Most of the music that is not subservient to the other audio is very satisfying, at least.

It may have been released early in the PS2’s life cycle, but X used the hardware well in its visuals, and still looks good for the system. Some of its environments are frustratingly dark, and the lack of camera control can be annoying, but neither of these issues is a direct criticism of the graphics. Characters and enemies are very well animated, environments are attractive to behold, and Squaresoft’s ability to create an eye-catching visual landscape in its first game on the hardware is impressive. 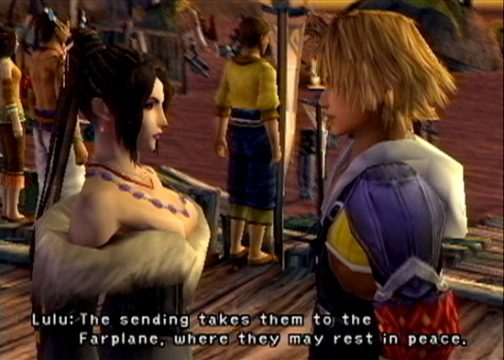 Tidus seems slack-jawed for some reason….

Final Fantasy X also features minigames that are boring instead of entertaining, and time-wasting puzzles in its temples. Blitzball is the only mandatory minigame in X, but by itself manages to waste several hours in its ill-conceived meeting of a strategy game with ESPN. The sphere and pillar puzzles in the temples are also a waste of time, with the additional demerit of not fading to the background as the game progresses.

Many of the boss battles in X are challenging, but in a very good way, as they require variation in the tactics required to bring them down. The random enemies also require quite a bit of finesse to deal with, and simply pressing the attack option repeatedly is not a viable strategy. There are a few optional tasks to investigate, and one optional dungeon to venture inside, but the vast majority of Final Fantasy X is quite linear and can be completed in about forty hours.

Final Fantasy X‘s core RPG elements are terrifically done, and in combat the game shows how to revamp the genre in a very good way. Unfortunately, combat isn’t enough, and the game is cluttered with other elements that are less uniformly enjoyable. The game’s plot has plenty of both profundity and nonsense, while its minigames are singularly uninteresting. The game is easy to recommend based on what it does right, but there are plenty of low moments to go along with the good stuff.