Just over ten years ago, the most popular Final Fantasy title to-date was released in North America: Final Fantasy VII. Its success has yet to be matched. So much so that Square Enix created a foursome of spin-offs around this single title. The first was the mobile game, Before Crisis, followed by the movie, Advent Children, then the PlayStation 2 title, Dirge of Cerberus, and finally the PSP game, Crisis Core. These titles have been tied together under the name Compilation of Final Fantasy VII.

Crisis Core focuses on a member of SOLDIER, Zack Fair, briefly mentioned in the original story. Crisis Core‘s story takes place a few years before the timeline of Final Fantasy VII. Before this game, there was very little known about Zack Fair and what was mentioned was unclear due to the game’s questionable translation. Crisis Core offers the first chance to truly understand some of the events of Final Fantasy VII, but that shouldn’t be the only reason to play it. Crisis Core has its own unique, interesting story, but if someone needs more incentive to explore this story, it includes what happened to create everyone’s favorite villain, Sephiroth.

Crisis Core may be the best looking game the PSP has ever had or ever will have. It’s hard to find any flaw with any aspect of the graphics from the pre-rendered movies to polygonal cut-scenes and environment. From the opening movie, this game shows off the PSP’s full potential. Everything is bright, colorful, and fluid. Crisis Core sets a new standard for what PSP titles should look like. 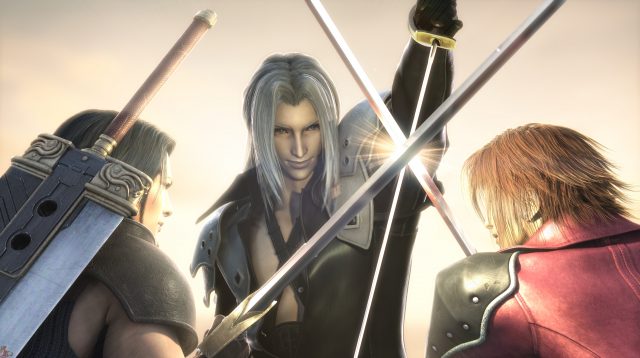 Fellowship of the Wing

The battle system is action style which is easy to use and very enjoyable. When an encounter starts, the camera will pan around Zack as the enemies appear on the screen. A female automated voice chimes out that battle is about to begin and Zack draws his weapon. Zack can use several options to attack, all displayed on the bottom-right of the screen. The most basic is simply to attack, to strike with his sword using a simple combo system to continue to deal damage and delay opponents’ attacks. Items are available as the last option for Zack. Selecting items opens a second menu replacing the first for the item to be selected, then quickly returns to the attack menu after the selection is made. Zack also equips materia and can use magic in this way. Unlike most Final Fantasy titles, magic does not automatically hit the target. The spell must be aimed at the target and can be dodged. Zack can defend both kinds of attacks by blocking with the triangle button or diving out of the way with the square button. Action is fast-paced and Zack is almost always outnumbered in these encounters. His basic attack combo begins to swing in an arc to hit multiple enemies after the first swing, so timing these attacks becomes important.

While Zack is in combat, a small slot machine device operates continuously, called the Digital Mind Wave (DMW). The DMW is comprised of two components: a familiar face and a number. There are multiple combinations of numbers that will give Zack various special effects, from no MP cost to invincibility. The better the effect, the rarer it will activate from the DMW. The faces can trigger one of Zack’s Limit Breaks. Much like the Limit Breaks in Final Fantasy VII, these are a special attack Zack can use against one or multiple enemies, depending on the attack. A Limit Break is attempted when the first and last face on the DMW match. Then battle is paused and a Limit Verge begins, in the same fashion as the DMW, except the first and last faces are already locked in place, but the numbers are not. If the center face matches, the Limit Break for that character is executed. Limit Verge execution is also the level up system for both Zack and his materia. If two numbers match and there is materia in the matching slot, that materia will level up. If triple sevens appear, Zack levels up. As the game progresses, Zack will get more faces for his DMW, including summons, chocobos, and other Final Fantasy VII characters. Different plots of the story can affect which face will trigger more often in the DMW from time to time. After the first few chapters, the frequency of the Limit Verge attempts may change, making it trigger more or less at times.

The music of Crisis Core is a mix of old and new. There are many familiar tracks based from Final Fantasy VII and also original scores in the same sound style as Final Fantasy VII, but with their own unique flair. While Takeharu Ishimoto did not work on the original music, he was able to capture and enhance the music into something even better than before. The only complaint could be that there isn’t enough music to span the whole game. The same battle music is used throughout nearly the entire game. No single song is so good that it can be listened to for that long. 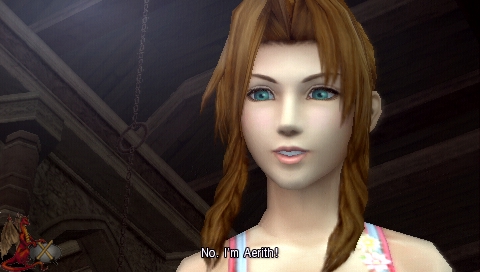 The main story can be finished in a few hours by skipping all optional content and mini-games, but it’s not recommended. While the mini-games are good, they’re not near as exceptional as some of the Final Fantasy VII games, nor are the rewards for perfect scores worth worrying about. To fully explore all Crisis Core has to offer, it could take nearly forty hours. At every save point, Zack can embark one of the game’s 300 missions. Unfortunately, all these missions are exactly the same search-and-destroy style in a minimal set of environments. The story components from these missions are very basic and add little, if anything, to the game. There are a couple additions to the DMW to be found, however. From this, a balance of twenty hours of exploration and story should suffice for everyone except a hardcore perfectionist.

There are sparse amounts of difficulty in this game. While the leveling system appears random, it’s actually a scaled system. The longer it has been since the last level up, the higher the chance of leveling up. Playing optional missions increases the chance for higher levels, almost to a fault. During certain parts of the game, Zack could take down random enemies in the storyline with one blow due to abuse of the missions. To counter this, there is a Hard Mode for those who seek a greater challenge. Crisis Core also has a New Game+ option which can go hand-in-hand with attempting the Hard Mode version. This allows some more exploration and replay without making it nothing more than a collection of one-strike kills.

Crisis Core does so many things right that it’s hard not to mark it perfect. Just a little more exploration and expansion of what is here could have been done. None of these reasons should give anyone a sole reason not to purchase this game. If you liked Final Fantasy VII for whatever reason, you should like Crisis Core. It is more than a supplement to Final Fantasy VII by creating its own cast of characters and their stories. If you like the Final Fantasy series in general, especially its storytelling, missing out on Crisis Core would be regrettable.