Bethesda Softworks, the developer of The Elder Scrolls IV: Oblivion, has set out to continue what Interplay’s Black Isle Studios had to drop: the Fallout series. Their first effort in this new venture is Fallout 3 for PC, PlayStation 3, and Xbox 360. Fallout games are typically set in a 1950s-style, post-apocalyptic future world, and Fallout 3 follows that tradition by placing gamers into the Capital Wasteland, formerly Washington DC. So how did Bethesda handle this dark, depressing world? In a word: masterfully.

The premise behind Fallout 3 ties in with prior games in the series, taking place in a world destroyed during the 2077 nuclear exchange between the US and China. Fallout 3 follows up years after the bombs in the quiet and uneventful Vault 101. The early part of the game follows the protagonist from a baby to a toddler to a young adult when a sudden change of events within Vault 101 has the player venturing out in search of his father, who has caused all levels of disruption and chaos by leaving the Vault. As those events unfold, the protagonist makes his way into the mysterious, unknown, ruined DC area.

Once free from the Vault, players quickly learn that the outside world is not a friendly place, and they will be met with many moral dilemmas along the way. The first major decision comes early on in the nearby town, Megaton. The entire city is built around an old, rusted nuclear bomb from years past. While exploring the town and meeting the villagers, three options are made available: leave the bomb alone, try to disarm the bomb, or attempt to set the bomb off. The decision is left up to each individual as to what to do and how to deal with any repercussions that stem from that choice. This is just a small taste of the options that are available within the game.

Karma is an important aspect as to how Fallout 3 plays out. Much like the decision in Megaton, players have the option of being “good”, “bad”, or a mix. Behaving like a saint means never stealing, lying, or killing anyone without provocation. People in the world will learn of all your good deeds and will react accordingly. That means other kind hearted folk will take a liking to you and the wicked ones will be out for blood. The same is true for the opposite end of the spectrum; players that act evil will have a difficult time earning the trust of the honest, decent citizens of the world. Of course, players can walk a mix of the two, taking the neutral option as well. While the main storyline is not drastically changed by the direction the player takes his karma, the world and the characters within it are. 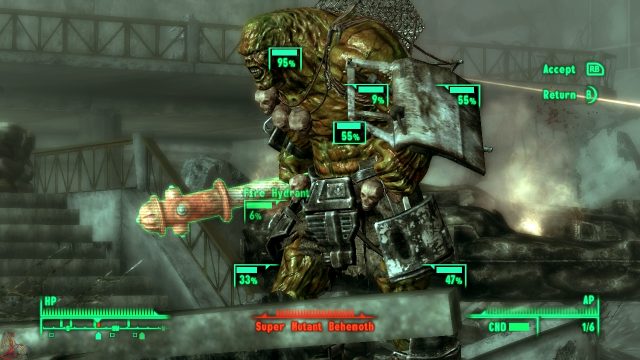 Fallout 3 takes an action-oriented approach, offering a first-person or third-person view for seamless exploration and combat. At most any point in the game, players can opt to battle enemies, creatures, or even random NPCs. With a hefty selection of weapons including sledgehammers, sniper rifles, miniguns, pistols, or mini nuke launchers, gamers will likely be able to find a play-style that fits them best. Durability of weapons and armor degrades with use over time, so they will be in need of periodic repair. Players can either increase their skills for repairing or pay others to do so for them. Even the best weapons will require maintenance to stay in top shape. Armor and weapons can be created, bought, or found, so the options for equipment are plentiful.

Instead of sticking with completely action-based methods of combat, Fallout 3 offers VATS: the Vault-Tec Assisted Targeting System. VATS allows for combat to be paused while the player selects a specific target on an enemy. Attacking the head can do heavy damage, while taking out a leg can hinder enemy movement and make it easier to polish off. In order to prevent this system from being abused, players are limited to a certain amount of points that can be used for each attack before it must be recharged, but even with that limitation VATS still gives a players a break from direct combat.

The main character of Fallout 3 is player-created, can be either male or female, and can be adjusted to look however the creator desires. Like many RPGs that offer a first-person perspective, the actual creation process is superfluous, as the character will rarely be seen. A third-person view is offered, but it can make movement awkward, so it leaves a lot to be desired. Along with creating the main character’s look, gamers also must decide how to distribute their skill points via the SPECIAL system. SPECIAL stands for Strength, Perception, Endurance, Charisma, Intelligence, Agility, and Luck, and players can allocate points into each of these areas to modify their character as they desire. Perks are also available upon leveling up and offer the character a list of bonuses that allow them to further specialize.

At first the world seems huge and empty, but upon exploring a little further, it is quite rich with areas and NPCs without being overly populated. While exploring, players will run across optional side-quests that encourage further exploration. These quests are one of the largest draws of Fallout 3, as they allow the player to make moral choices as to how to complete the quests while exploring. Thankfully, Fallout 3 does a great job of directing players where to go next instead of just leaving them at the mercy of a huge, dangerous world. Map markers, directional arrows, and a quest log all help to ensure that players do not get lost, though many quests do require exploration beyond just reaching a marker on a map. 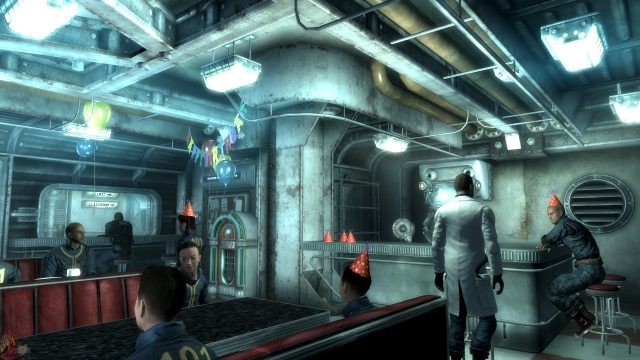 Life of the Party

Menus are easily accessible at the press of a button and will bring up the Pip-Boy to use for managing equipment, quests, and viewing the world map. For fast travel, players can select a previously visited area on the map for a quick trip to that location. When multiple quests are open, one specific quest can be set as active, changing the tracking marker to the next step in that quest. Games can be saved almost anytime and anywhere. That, along with auto-saving, helps to ensure that forgetful players don’t lose all of their progress when they get in over their head. One minor complaint comes during exploration, as in many places there are rocks, holes, and crevasses which can unintentionally trap characters, requiring a prior save to be loaded in order to escape. Also throughout the game, there are NPCs that can follow the main character around and assist in combat. Sadly, their pathfinding is less than perfect, so they will often become stuck behind minor obstacles. Neither of these things happen often enough to be a major problem, but are noteworthy.

Fallout 3‘s presentation is impressive. The world is very drab and gloomy and that fits the game’s setting perfectly. While some areas are guilty of looking copy-and-pasted, especially some of the underground areas, many of the outside areas are still highly detailed. NPCs are fairly well-detailed as well, and more importantly, they are fairly diverse. Enemies are not as lucky, as many of those are recycled, even human enemies. Audio is very impressive, though it is fairly limited as well. In-game audio is mostly limited to dramatic music in cutscenes, voice actors, and radio stations. Radio stations, especially Global News Radio (GNR) and its DJ Three Dog, are highly entertaining. The GNR will give constant updates as to the going-ons in the world mixed with 1950s-style music. The music is very catchy and adds a nice ironic touch to a dark world.

Even though Fallout 3 offers a ton of side-quests and areas to explore, the main quest is fairly short, clocking in at around twenty hours. Players could easily spend forty or more hours doing many of the game’s optional quests. The game is fairly challenging at normal difficulty, though at any time the setting can be moved up to hard or very hard as well as down to easy or very easy. On the middle setting, players will need to take care by making good use of VATS, keeping track of their ammo, repairing their weapons, and being cautious not to get outnumbered. Thankfully, adding a helper to assist with combat can help alleviate some of these issues.

Overall, Fallout 3 is an amazing game and a great new take on the series. It succeeds in not being “Oblivion with guns” and is able to win over gamers that were not even fans of Bethesda’s earlier works or the Fallout series. Fallout 3 is an addicting experience for those who enjoy a game with an open world to explore and quests to complete, and makes a great introduction to the series for newcomers. As long as gamers can handle some blood, guts, and a heavy dose of foul language, there is little wrong with the game. This might even be one of the only games in this reviewer’s recent experience that has enough of a draw to continue playing after the main quest is completed. Fallout 3 is a great experience, even for gamers who typically don’t enjoy games like it.