The Strongest Guild in the Land

Manga and anime have ventured into the realm of RPGs since the early days of gaming, and it was only a matter of time before the Fairy Tail franchise entered the fray as well. Usually these games garner mixed reviews as they seldom hit a cohesive mark with long-time fans and those that are new to the subject matter. Teaming up to release Fairy Tail, Gust and Koei Tecmo offer a little something for both sides: a fun turn-based RPG experience, that also throws players right in the middle of the source material.

Picking up at the ending moments of the show’s Tenrou Island arc, which culminates with the heavy hitters of the Fairy Tail guild going missing for seven years, the game throws players directly into an ongoing story. This arc occurs mid-way into the series, so players will need to have some familiarity with the characters and setting to really have a grip of the situation. The long absence of the once renowned guild has made people forget all about it. Not only are they removed as one of the top-tier guilds in Fiore, but the rest of the guilds have caught up to the cast in terms of power, which is how the game justifies the main characters starting at level 1.

The game closely follows the canonic story, so fans of the series will instantly recognize story points and what events come next. There is also an encyclopedia that vaguely fill in the blanks, though nothing in the game will catch new players up entirely. This is an unfortunate drawback to a game that covers so much material, but something that seems necessary because there is so much content to explore. It would be hard to fit every story beat in one game and Fairy Tail does a good job of fleshing the important segments out. 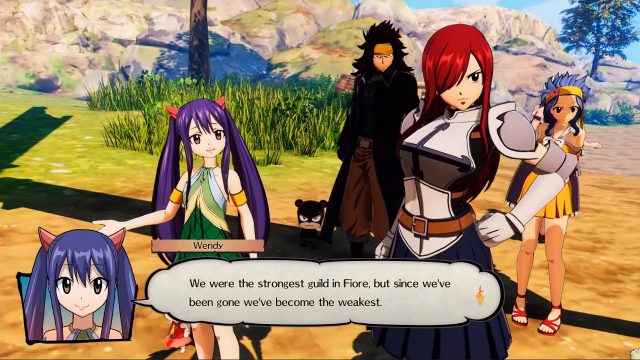 That’s just how it be sometimes Wendy.

To get Fairy Tail back among the most recognized and popular guilds, the gang must complete quests and other objectives townsfolk ask of them. Starting with rank D quests and completing tasks from the request board, the group can increase their rank, get rewarded with items, and help raise Fairy Tail back into the spotlight. These jobs can get repetitive, but some allow fixed characters to team up and receive some character development, so not all are bad. The main objective is to amass enough points to take on the S level rank quests for some bonus story content.

As far as the story goes, it’s a standard mix of ups and downs for the heroes. For those unaware of what’s to come, some parts can get really exciting, though there are some obvious moments where would-be fights and side-stories were cut and condensed into small chapter preview excerpts. When the credits roll, a lot of story is left on the table, and a few antagonists are still running wild. There is a rather meaty epilogue, though by the end of it, the story was no closer to a rewarding conclusion.

After teaming up for in fights together certain characters will have growth stories open up between certain individuals, and these are genuinely a treat when available. Not only do they open up interactions between the two characters, but they also allow for more powerful combo attacks in fights. Unfortunately, not enough of the non-guild members get additional story segments, though with over one hundred already in the game it’s not like the content is lacking. 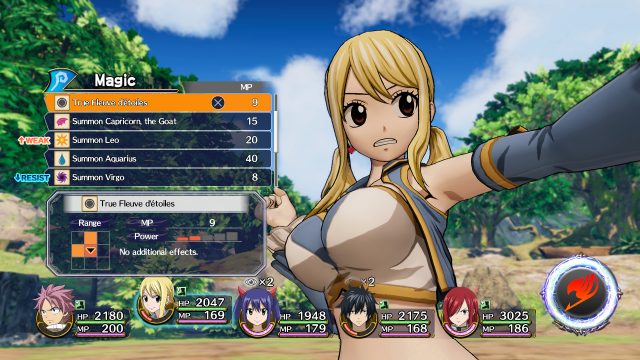 Battles will tell players which attacks are strong and weak versus enemies.

Fairy Tail seems to have copied characters and personalities straight from the show, as each character represented in the game is portrayed how they would normally act. Gust did a good job working with series creator Hiro Mashima to ensure every character is represented accurately. As such, the character models also look great, and the animated segments look just as good, if not better than, their counterparts from the anime.

The battles are where Fairy Tail and its characters really get to shine. The turn-based battles are vivid and impressive as the characters perform their signature special attacks. Each character has an element they are adept with, generally paired with a weakness to the opposite element. Many of the series’ staple attacks can be seen tossed around in fights, and as characters level they learn new attacks, as old attacks get boosted in power. There is the option to skip animations altogether, but this has to be enabled before a character’s turn. Special magic crystals known as lacrima function as the game’s equipment and characters can equip any piece that is the party’s inventory, each having numerous statistical properties.

Battle takes place on a three-by-three grid, with each ability affecting some portion of those nine spaces. Some characters also get new forms that offer stat boosts that they can turn into during battles, and there is a Fairy Meter that, when fully charged, allows the team to perform chain attacks for maximum damage. Some fights will require spillover damage to remove detritus and open up new routes for the guild. The chain attacks are the easiest method of solving these literal roadblocks, with most blocking treasures or quest items. Combat does suffer from two minor problems — first, the standard attack is useless, as magic rules the day; second, there is a distinct lack of enemy variety. 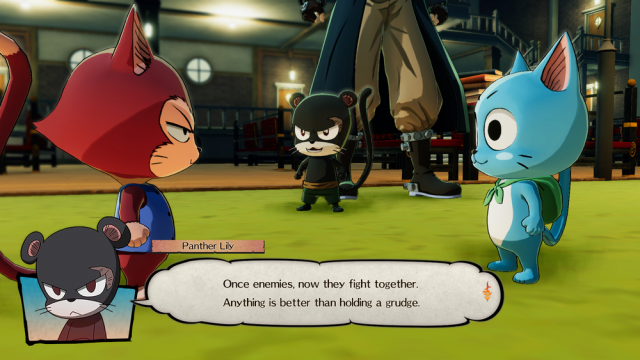 A common trend in the series it seems.

While the music sounds like something becoming of the series, nothing really stands out. The tunes are catchy enough, but the real ace was the voicework by the Japanese actors. Gust tried to get as much of the TV cast back, and they play their parts perfectly, adding to each scene.

One thing that might turn people off is the constant fanservice the game provides. Some characters are scantily clad, though Gray’s shirtless chest is a common sight to those who are familiar with the anime, and a stereotypical bathing suit scene feels right at home with the source material. The game also allows players to change character’s outfits, with a few different outfits and color swaps for every character to switch into.

All in all, Fairy Tail is a fun experience, and while it is mainly designed for fans of the franchise, the game isn’t entirely unapproachable for new players. The battles are pretty and fly by quickly enough that they never drag on. There is a lot to like about this title, despite a few hiccups such as the unresolved finale. It feels very much like it recreates scenes straight from the show, and while some quests can bog down the experience, the main story kept me engrossed and wanting more.