Miniatures on a Grand Scale

Anyone can make a fantasy game. Heck, pretty much everyone has made a fantasy game. They’re as prolific as first-person shooters, and just as unoriginal. But just like with first person shooters, there’s a huge difference between cheap, generic throwaways and the ones that take the time to really invest themselves in their worlds. Faery: Legends of Avalon is one such game. Though the game itself is little more than a typical turn-based RPG, developer Spiders has created an incredible gothic fantasy world to explore that truly feels alive.

Faery‘s story steeps itself in folklore from around the world, particularly tales of magical creatures. The player takes on the role of a faery or elf on the island of Avalon, awakened after a lengthy slumber. Oberon, the King of the Faeries, has summoned you for an important mission. The magic of the faery worlds is waning, and you must travel through magical mirrors to some of these worlds in order to prevent them from disappearing entirely.

The overarching plot of the game is fairly typical and not that inspiring, but the folklore the game is based on is rich and mostly untapped by the video game world. The island of Avalon and its inhabitants, for example, are all based on British folklore. Oberon is best known as a major character in Shakespeare’s A Midsummer Night’s Dream. Three other worlds are present in the game: Yggdrasil the World Tree, which contains a combination of British and Norse folklore, the Flying Dutchman, which is based on nautical folklore, and the Scarabeiad, which is primarily based on Scheherazade’s 1,001 Arabian Nights. A great deal of care has gone into the game’s dialogue, as well. Characters all speak with a lot of charisma and flavor, with one character even going so far as to speak entirely in rhyme. Unfortunately, the game is also riddled with typos, spelling and grammar errors, and at least one instance of a scripting error. 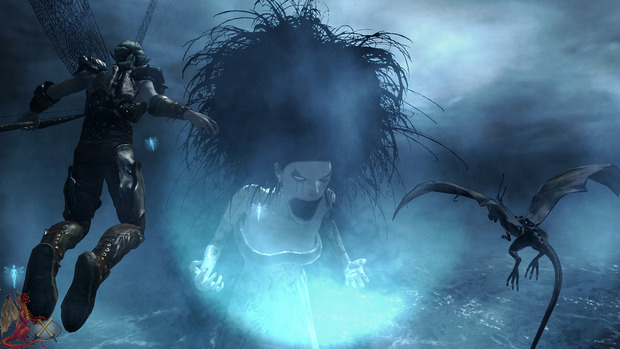 Quite a mouth on her.

All this folklore and fantasy is supported by a terrific visual style that’s somewhat reminiscent of Guillermo del Toro movies Hellboy and Pan’s Labyrinth. In particular, the character creator that opens the game is shockingly robust. Although it features the staple bars and sliders seen in other generators, the color palette ranges from fleshtones to neon lights. Character customization goes even beyond that, however, once the game gets going. With each level, a skill point is earned that allows the player to further enhance their character’s physical appearance. “Metamorphosis,” as the game calls it, allows the player to choose from a short list of modifications to various body parts, each of which provides a new skill that can be used in battle. These vary from simple tattoos to physical attachments such as wings, tails, horns, and antennae. Every player can be assured of having a character that is truly their own, which is not something many RPGs can say.

Thanks to having a wide variety of skills available, combat is rarely boring, but it’s not particularly engaging either. It serves its purpose, and thankfully combat is not a primary focus for Faery. Instead, exploration and conversation are the name of the game. There are roughly fifty NPCs throughout the game that can be spoken to and interacted with, and they all have their own take on the world. Many of them have sub-quests for the player to accomplish, and the main quests will likewise require talking to everyone, and regularly as well. Rather than spell out quest goals for the player, Faery makes you go out and find the information yourself by interrogating everyone you meet. One character might have a list of items that need to be acquired, but won’t know where to find them. Other characters have that information, and in that way, the game has you flying around in an amusing game of hide and seek. 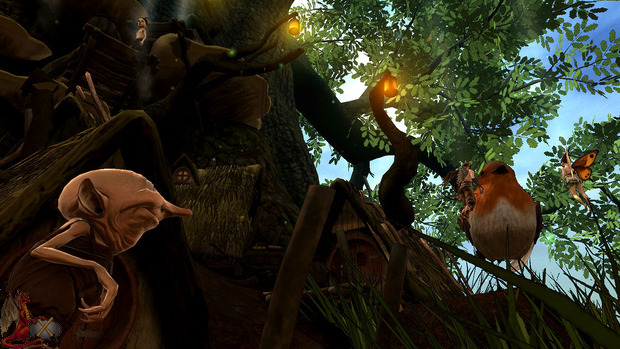 Giant birds like the one shown here help give the game a sense of scale.

You may have noticed I said “flying around” rather than “running around.” The reason for this is that Faery is pretty much the only RPG I’ve ever played that completely forgoes the concept of gravity. As a faery or elf, the hero can fly, and that flight capability is one of the most stand-out features of Faery. Each world is a fully realized 3D environment, and they’re all designed with this in mind, to great effect, but most prominently in the Yggdrasil and Scarabeiad levels. The former takes place entirely surrounding a gigantic tree, and the player is able to flit through the treetops and branches and see the entirety of its height. The Scarabeiad, on the other hand, is a crumbling city that rests atop of an enormous scarab beetle, and the player can fly to its underside where a second, crude, wooden city has been attached to its belly. It also helps that the game provides an incredible sense of scale. The hero and his allies are all roughly six inches tall, so real-world creatures that you encounter fit that scale; birds are bigger than the player, ants are the size of lapdogs, and the human ghosts you encounter are towering giants.

Faery‘s audio is a mixed bag. The soundtrack is wonderful and provides a terrific, haunting atmosphere for the game’s entirety. Though there aren’t a large number of different tracks, each world boasts its own musical presence that helps bring it to life. Unfortunately, one area that is missing is vocals. With colorful, accented dialogue, voice acting would have helped bring the characters to life all the more. Worse, the game’s dialogue advances automatically, and character lip movements appear to be synced to something, which suggests that maybe the game had vocals in a different language (Spiders is a French developer).

For 1200 Microsoft Points, Faery will net you roughly ten hours of amusement. Although the game never manages to be much more than average, the colorful dialogue and impressive visual design make it a world worth exploring. The game also ends with a “To Be Continued,” meaning that a sequel or possibly sequels could be in the works. Though the minimalistic plot fails to leave a lasting impression, the game’s stylistic charm can’t be denied.