End of the Long Wait

It’s been four years since Etrian Odyssey IV, and while Atlus has been keeping the fans sated with remakes of the first two games, there’s something about an actual sequel that’s simply more enticing. Fans of the series have wanted to see what strange new directions the series will take after the oceans of Etrian Odyssey III and the skies of Etrian Odyssey IV. Etrian Odyssey V both does and doesn’t live up to those expectations. According to the director, this game is an intentional throwback to the simpler days of the original games, and one can see the results of that in both the more straightforward plot as well as the lack of any gameplay other than pure dungeon crawling (no sailing, sadly). On the other hand, exploration and the turn-based combat are at their most refined, providing creative dungeon designs and even more character customization.

The heart of the Etrian Odyssey series has always been the creation of the player’s own personal adventuring party. Rather than having a party of pre-defined characters, or a solo blank-slate protagonist, every member of the party is created by the player, reminiscent of classic CRPGs. At the start of the game players are prompted to create five to thirty characters for their new Explorer Guild, and for the rest of the game NPCs will refer them by the name of the guild, not any particular character. These characters are given no motives other than to progress through the Labyrinth of Yggdrasil, seemingly simply because it’s there. Each is merely a combination of class, portrait, voice, and — new to the series — race. While players are free to imagine their own backstories for each character, the game doesn’t encourage it in any way and it’s easy to come to think of the characters as mindless puppets under the player’s control. Customization is extremely freeform compared to past games: players can freely customize character portraits’ hair and eye colors with either preset options or by setting specific RGB values. There are also eight skin tone options per race, and forty voices plus a “no voice” option. The game makes no distinction between male and female portraits and voices, so players are free to mix and match them as they please. 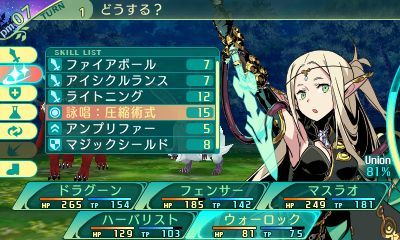 You can’t fool me, I know an elf when I see one.

The existence of different races throws a wrench into the standard Etrian Odyssey formula. Instead of stats being determined by class, in this entry they’re determined almost entirely by race. The four races are the humanlike Earthrun, who are both sturdy and lucky, the bestial Therian, who are incredibly strong and agile, the elf-like Lunarian, who are frail and good at magic, and the short Brownies, who are good at healing. Each race is only given appropriate class options at first, but early in the game the player gets the option to reclass their characters into any of the classes. While one might think this would open up a lot of options, in practice the vast majority of choices are terrible, simply because of the base racial stats. A Therian will never make a good mage, and a Lunarian will never be good at punching. Characters are almost always better off sticking to their starting class. Unlike previous games, there is no way to subclass or learn any cross-class abilities. Instead, after a certain point in the story the characters gain the ability to promote to advanced Master classes. Each Master class takes one aspect of the base class and specializes in it. For example, the Fencer class is a nimble swordsman who can choose to specialize in either dodge-tanking or in chaining together multiple strikes per turn. Depending on how the party specializes, the player’s strategies can change completely, as different Master classes are essentially different classes entirely. The game is at least fairly forgiving of experimentation as both skills and specializations can always be respecced for the cost of only two levels.

The existence of these fantasy races also changes the scope of the plot and setting. Previous Etrian Odyssey games have always focused on a single town and its neighboring Labyrinth, but this one regularly references a larger world with multiple countries from which these races come. The action itself is still limited to a single town and the dungeon, but the writing goes out of its way to emphasize that people are gathering there from all corners of the world, and as a result the setting feels more cosmopolitan than usual. The writers also seem to have put effort into subverting the fantasy racial stereotypes, often before the game even makes it clear what those stereotypes are. For example, the Therian innkeeper is a ditzy young woman with bunny ears, while Therians in general are later described to be an almost Spartan-like culture obsessed with survivalism and martial glory. On one hand, it’s nice to have more worldbuilding, but it sometimes falls flat. While there are NPC characters with their own plotlines, ultimately the story is just about the player climbing the tree for no particular reason. Almost no clues are given about the nature of the Labyrinth until a plot dump right before the final boss (although it is an interesting twist). Some will enjoy the freedom to imagine their own motivations, while others will find the plot dull and unengaging.

The gameplay itself is dungeon crawling in its purest form. There is a single dungeon with thirty large floors, divided into six strata with a boss at the end of each. A party of five adventurers can explore the dungeon at a time, and there will be plenty of random battles along the way. New to the series are special pet slots for the pet-using classes, mostly Houndmaster and Necromancer, although there are only three pet slots so these classes can step on each other’s toes. There are multiple difficulty settings that can be changed at any time, but in general random battles are fairly simple yet difficult enough to keep the player on their toes. Effective use of status ailments and defensive skills is the key to success, and they can even work on bosses, albeit at reduced rates. One wrong move in even familiar random battles can easily lead to a wipe. However, the game is fair in introducing the player to new enemy types and their abilities before later combining them in devilish ways.

Dungeons are explored from a first person perspective, and take place on a large grid of squares. Sometimes there are event tiles where the player is given various text options, the results of which can depend on which classes, races, or skills are in the party. For example, an Herbalist might warn you ahead of time that the berries you’re about to eat are poisonous. These sorts of events are more common than previous games, and after each event the party earns a small amount of XP, regardless of the results. The series’ trademark mapping system also returns, with the lower screen almost always devoted to displaying a map that the player is expected to fill in as they explore. Luckily though, there’s an option on the menu to automatically place floors and walls for each tile stepped on, so players that find that part of mapping tedious can simply opt out of it. Each floor also unlocks new sidequests, which usually require specific tasks to be done on specific floors. By far the most common puzzle when exploring is dodging large enemies called FOEs. As usual, FOEs are powerful enemies that appear on the map and need to be avoided by paying attention to their movement patterns. The game is more creative than ever in how they interact with the gimmicks of the dungeons, such as FOEs that will chase you through teleporter mazes, or ones that will try to knock down pillars to block the party’s path. 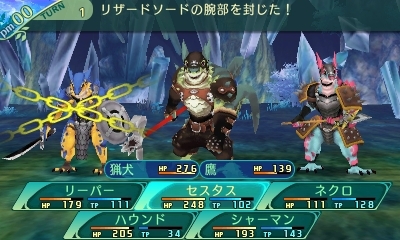 Learning to bind your enemies will save your life someday. Probably.

Graphics are minimal, but well done when it counts. Dungeons are pretty, but have fairly low draw distance compared to previous games. Monsters appear in battle as well-animated 3D models, taking advantage of the fixed camera angle to have a mildly cartoonish look to them. Bosses can get huge and extremely detailed. All the skills used in battle are simply particle effects and lines sweeping across the screen, but at least they’re clear about who they’re hitting, and quick enough that players won’t get tired of them. Their simplicity seems to be less of a technical limitation, and more of a design choice. All character art is done as fairly high-resolution anime-style portraits and is generally attractive. However, some characters are rather underdressed and/or young looking, and players may feel uncomfortable looking at them. While they could simply avoid using any class portrait they don’t like, at least one major NPC will likely raise some eyebrows.

The Japanese voicework is solid, but players may find themselves getting annoyed at the higher pitched characters. There’s also an issue that, when assigning skillpoints, the character will speak the same short line over and over again. This can get really bothersome when respeccing at higher levels, as players have to assign fifty or more points with the same audio response. The soundtrack is all-around excellent, using a variety of instruments to convey different moods in different areas, with some choral soundtracks used in major boss fights. Special mention goes to the bizarre and creepy sound effects used in the music for the postgame final stratum. There is also an FM version of the soundtrack available as DLC, replacing all instruments with the kind of synthesizer used in earlier EO games, but not all the tracks survived the conversion equally intact.

Overall, Etrian Odyssey V is another great entry in the series that will highly entertain existing fans of the series, as well as many of those yet to give it a shot, though it won’t change the minds of those who had previously decided the series is not for them. It shoots to expand the scope of the worldbuilding in a way that doesn’t necessarily suit the genre, but it builds nicely on the systems that made the Etrian Odyssey series popular with its fans. Building one’s party is more engaging than ever with the portrait customization and Master specializations, helped by a level of the challenge that makes players care about how well balanced their party is before they return to a giant tree filled with monsters.