FOE! FOE! Burning Bright. In the Labyrinth of the Night.

Game sequels are tricky foes. What should change? What should stay the same? What tweaks to the gameplay will make the smallest number of fans livid and the greatest number of fans ecstatic? Etrian Odyssey II: Heroes of Lagaard had to tackle this popular gaming industry problem when the original Etrian Odyssey was a cult success to such an extent that it demanded a sequel. So how does Heroes of Lagaard fare releasing in North America just over a year after the original? As long as an enhanced version of “more of the same” satisfies fans, then the new entry in the Etrian Odyssey series delivers an engaging, well thought-out, and challenging experience that is not without its disappointments.

One of the most interesting dynamics this game has to offer is the surprisingly successful relationship between the “old school” inspired gameplay and the fact that it could only be made for the comparatively new Nintendo DS. The reason for this is that throughout the entire adventure, the player will be drawing his or her own map of the expansive labyrinth in which the whole game takes place. While in theory this sounds like unnecessary work, in practice it adds to the suspense of exploring every corner, heightens the responsibility and sense of accomplishment given to the player, gives new meaning to customization, and truly is the feature that pulls the whole game together. It is obvious that the developer, Atlus, is aware of this as this sequel boasts approximately three times the number of cartography selections as the original. While this is a welcome addition, gone are the in-game suggestions for each symbol’s use, and for newcomers to the series it will likely prove to be a frustrating exclusion. But with that exception aside, map-making remains as intuitive, speedy, and enjoyable as ever thanks to the great implementation of the DS touch screen controls. This near-flawless execution is necessary as these player-created maps will become an explorer’s lifeline. 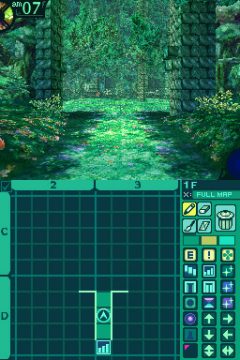 So, great — drawing maps, fun times, but what about the gigantic maze viewed in first person that the map is representing? The goods news is that the labyrinth is visually superior to the one in the original Etrian Odyssey. Not only that, but now the player has the ability to strafe left and right, adding a great deal of convenience and fun to navigating the many floors. Also, the vast majority of the floors are well designed, captivating, and provide challenge through excellent level design rather than cheap tricks. The bad news is that stratum themes will seem too familiar to returning players, frame-rates will almost screech to a halt in big rooms with more FOEs on screen, and the penultimate stratum once again dissolves into an uninteresting mess when the game is supposed to be reaching its climax. In fact, the game would almost be better off without that fifth stratum as it essentially ignores what the game does extremely well on every other floor.

But more on the disappointing conclusion in a moment, as it is important to explain why the game works in all other respects. The best place to start would be the cohesive presentation. Etrian Odyssey II is a game without frills and that is to its benefit. If 3D character models, extensive cut scenes, and epic musical numbers were included in the title, they would feel immediately out of place. The success of the game stems from its self-awareness in being inspired by RPGs of old, including text-based adventures. The focus is almost always the deceptively complex gameplay, and it works. The main hub is just a background with a menu. Characters, NPCs, and enemies are all charming 2D sprites. Story is practically non-existent, and there will be times when there is no main quest to speak of. The player’s only choice at this point, beyond a constant stream of side-quests, is to explore the labyrinth until the next story sequence is triggered. Again, this works as it lends itself to the pure focus on exploration and the mood of being lost in a giant maze. Battles have no frills either, and while they can be relentlessly difficult, a lack of full out animation actually adds to the intensity of the battle because it would otherwise be a distraction. One welcome addition to the turn-based system is the ability to “auto-battle”. This will make the party continue to execute regular attacks until told not to or until the end of the battle. This helps a great deal with the ultimately necessary level-grinding players will encounter.

However, just because the game is consistent and knows how to excel in a single, niche genre doesn’t make it perfect by any means, and this is still only a game for select players. While fans of the series will enjoy tweaking their characters’ statistics in the many available classes and experimenting with different party combinations, others may find themselves consistently frustrated with the high difficulty level. Heroes of Lagaard doesn’t let up any of the ruthlessness that the original was known for, and in fact, the popular FOEs — incredibly difficult mini-bosses that no longer give experience points — come in even more forms to terrorize exploration and send parties to countless “game over” screens. The good news is that for the first four strata, the challenge will be largely satisfying to overcome. Strategy goes a long way and time spent customizing will be rewarded. 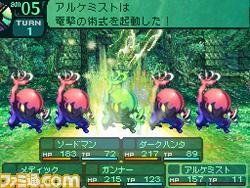 Dance before you are destroyed, demons!

However, as mentioned before, all this goes down the drain when the final section of the main quest begins. The game suddenly tries to introduce a story that feels melodramatic, jilted, and out of place. As if to complete the package, the surroundings in the labyrinth become hideous and the music gets worse. To top it off, the challenge of the battles becomes more based on the enemies’ randomly activated “instant-death” skills rather than continuing the previously impressive natural curve of difficulty. If players keep their cool throughout the majority of the game, it is almost guaranteed that the final stratum will cause them to collapse into helpless tears of frustration. In a game that seemed to succeed in doing specific things very well, the fifth stratum decides to throw everything out the window and it is truly saddening.

There are other things worth mentioning before attempting to sum up the overwhelming amount of gameplay offered in Etrian Odyssey II. First is the added convenience of viewing character statistics while purchasing equipment. While it was a major oversight to not include it in the first game, it doesn’t hurt to see it added seamlessly for the sequel. Next is the availability of all but one class right from the very start, allowing for more customization before explorers even step foot in the first stratum. Third are the simple and previously included mechanisms for time, allowing for some time-based side-quests and nocturnal FOEs. Finally there is the returning random encounter radar, which makes the random battles a little less random.

All in all, Etrian Odyssey II: Heroes of Lagaard is a difficult game to score, especially in the sub-categories. Sure the graphics can be simple, but that helps the mood of the game. Sure the sound effects are not unlike the original Game Boy and the same could pretty much be said for the music, but that adds a necessary charm that no other audio combination could add. And sure there’s no plot for the most part, but the game excels when it’s not pretending to tell a story beyond “climb the tree”. There is no clear cut answer for a game like this. It is for players who want to carve their own experience and will not mind getting perpetually pummeled by the game’s unforgiving, yet often rewarding, difficulty. It is for the nostalgic gamer and the gamer with a lot of time on her hands. So any player with a strong stomach is surely recommended to pick up this title before it is as scarce as its predecessor, last stratum be damned. But consider this a warning; anyone who heeds it well will surely survive the labyrinth.