Too Old for School

Elminage Original is the latest in a long line of Wizardry clones from Japanese developers. Developed by Starfish SD and localized by UFO Interactive, Elminage brings a classic and often brutal style of first person dungeon crawling to the PSP. It provides a huge amount of depth in terms of party creation, customization, and exploration given the open nature of its quest. There is fun to be had in exploring the depth in Elminage, but getting to that requires putting up with an awful localization, outdated mechanics, and quests that often have ridiculously vague objectives. Elminage will have players rolling patience saving throws at every turn.

The story is by far the worst element in the game. This kind of game often doesn’t try to do much with story, and Elminage is no exception. After an initial trial dungeon by King Dane, the player is tasked with finding the six rings that protect the world and restoring them to their home in a tower called the Dragon’s Fang. Players meet and fight the dark sorceresses behind the scattering of the rings along the way, but there isn’t much dialog and the attempts at characterization ultimately fall flat. There are more side stories in the many side quests in the game, but nothing proves to be any more engaging. Localization issues don’t help matters but it’s unlikely a better localization would have made this boring tale any more interesting. It’s not so much that the tale is bad, more that it’s offensively pointless.

The graphics thankfully have a lot more character to them. The 3D dungeons aren’t amazing to behold, looking like the low budget creations that they are. Thankfully the game has a large variety of small dungeons instead of a few large ones so the graphical style of dungeons is always changing to keep things fresh. Enemy designs are all static 2D sprites, but come in many different strange shapes and sizes. Players will fight everything from an angry looking tree to zombie dragons and maids. The location of these monsters won’t always make sense, such as an angry tree appearing in the underwater dungeon, but variety is never an issue. On the flip side, music and battle sounds suffer from a very distinct lack of variety. What’s there isn’t grating for the most part, but anyone playing with the sound turned off won’t be missing anything. 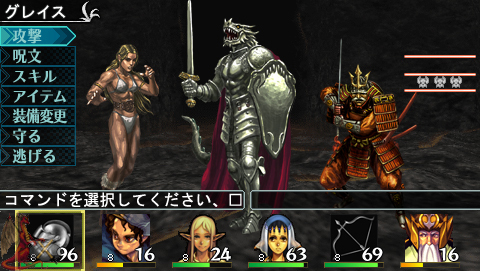 A brawler, dragonewt, and samurai walk into a bar…

The key topic here is the battle and character mechanics, which is the main attraction for any dungeon crawler. Elminage features a variety of classes and races that for the most part fit into the typical fantasy fare. A few classes and races such as the fire breathing Dragonewt and the bizarre maid provide some choices beyond the typical. Of note here is that several of the race names are actually mixed up in the English release, making character creation a chore for those looking to use certain races. Players choose some stats to apply bonuses to but after that customization is out of their hands. Characters increase HP and stats as they level and magic users get new spells and MP in the classic Dungeons and Dragons style where each spell level has separate MP. Players are free to keep a large roster of characters, but can only bring six adventuring at a time.

Players progress in the game by acquiring “fame” through side quests, which can then be applied to a compass that points to the next ring to be tracked down. Side quests consist of a variety of objectives from going off to a different town to buy an item, to hunting for specific items in the game’s many dungeons. After an intro dungeon, every location in the game becomes open to the player, so what side quests are taken on and from where are completely open. When it’s time to hunt down a ring, an onscreen indicator will show whether it is located in the current dungeon, and if it is the indicator will point in its direction. The rings don’t always show up in the same dungeons in every playthrough, but their discovery always ends in a boss fight. 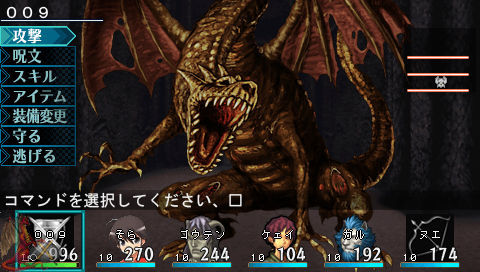 All this freedom is nice, but there are a number of issues with the execution that leave a lot to be desired. For starters there’s a clear adherence to old-school mechanics here that make the game incredibly unfriendly to players. Monster selection in battles can be cruelly random, sometimes causing the player to run into a completely brutal and unwinnable battle in one pass through an area, and a cake walk fight the next time. This even extends to the boss battles, where extra monsters beyond the core combatants are so random that if the player is really lucky there won’t be any extras to battle with. These can make completing any objectives an absolute chore, especially with lower level characters, as combat is very frequent. As characters gain more powerful skills, attacking things becomes more manageable, but to get to that point requires an almost unearthly amount of patience and perseverance. At the very least the game lets you save anywhere to make retrying difficult sections easier.

To make matters worse, the quests themselves have some major issues. While many are relatively easy to figure out, others will have players endlessly searching dungeons trying to figure out what exactly they need to be doing. Some quests may even require specific classes that the player will have to swap in and possibly level if they don’t already have that class in their party. Worse yet, translation issues in some cases can have the player searching for an item that has a different name than what is listed by the quest description. Depth and freedom are great, but contemporary games like the Etrian Odyssey series have shown that this can be accomplished without leaving the player lost and clueless. It is a shame too because when not dealing with these frustrations, especially in the long and challenging final dungeon, Elminage can provide some truly exciting moments.

In the end, Elminage sticks far too closely to old-school mechanics that just no longer provide for a fun experience. Vague objectives, cruel difficulty, and annoying and frustrating Dungeons and Dragons-based mechanics like level drains will challenge the patience of even the most die hard fan of first-person dungeon crawlers. A host of translation mistakes and quirks just make matters worse. With a boring story providing no real incentive to work past these issues, only those with unearthly patience will be able to work beyond these issues. Those that can manage to forge a high level party will be able to access the best moments in Elminage, but it’s unlikely to be worth the trouble.