Sometimes when we embark on a journey, we often don’t know what we may be getting ourselves into. Whether it’s a journey to places unknown or one of self-discovery, people often question their own motivations when they take a voyage into realms of the past. Through soul-searching, we find bittersweet truths about ourselves that sometimes may be difficult to accept. Humble Hearts, creator of Dust: An Elysian Tail takes RPGamers on a journey where soul meets body, and shows us that even the harshest of realities have the power to change people for the better.

The story begins with Dust awakening in a lush forest without any memories of his past. Nervous, he struggles to recall who he is, as though pieces of him have scattered along the wind. Confused by his lack of purpose, Dust soon meets Ahrah, a mystical talking sword, and Fidget, a lively pint-sized flying guardian. Ahrah explains to Dust that he must seek his “true self” in order to confront the ills of his past, but to do this, he must take a journey of self-discovery.

While Dust starts out as a story that has been told before, there’s a certain level of personal connection between Dust and the player. The narrative is one that focuses on wanderlust and redemption, but is told in a simplistic and touching way. In fact, there are moments in the story that are downright heartbreaking and bittersweet, evoking emotions that many RPGs fail to capture. While many RPGs fall short in telling a cohesive story in forty hours, Dust‘s tale manages to keep players engaged and wanting more from its seven hours of playtime. Watching Dust grow as a character is a treat for those who love personal narratives, and it helps that the writing is strong enough to keep the story fluid throughout. 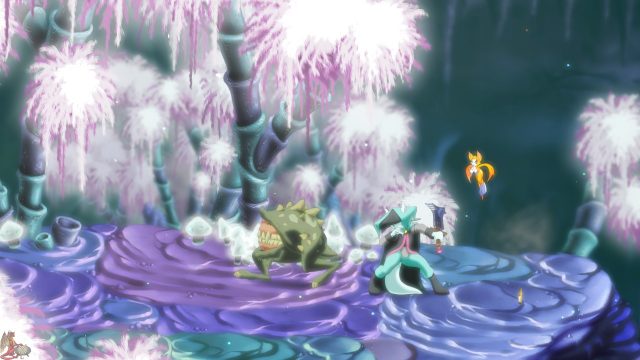 Look at those pearly whites!

It’s also important to note how fabulous the secondary cast of characters is. From Bopo, who’s heartbreaking tale sends Dust on a journey for snow, to Ginger, the young girl who struggles to find solace in the loss of her family, and finally to Fidget, the guardian who, despite being primarily a source of comic relief, also shares her own personal narrative that adds layers to the story. Dust is like an onion: in peeling back its layers, there’s so much to discover with its beautifully fleshed out world and its touching ensemble cast of characters. The more layers peeled back, the more the player can discover throughout the journey.

Speaking of personal expeditions, it’s hard not to mention the breathtaking visuals provided in Dust. Each area is beautifully woven together and tightly designed. Traversing through the locations feels like moving between watercolour paintings, and the overall Japanese aesthetic presented in the game adds another well-defined layer to the overall look. Each area is unique and provides a different tone to the game. Even the simplest movement of snow falling and trees blowing gently in the wind give personality to the locales. When Dust and Fidget fight, their moves feel as through they blend seamlessly into backgrounds, and never look out of place. The character portraits and animation sequences are also well designed and beautifully thought out. It feels as though Humble Hearts wanted gamers to constantly have a personal connection with the world, its locations and its atmosphere, and it succeeds on all levels. 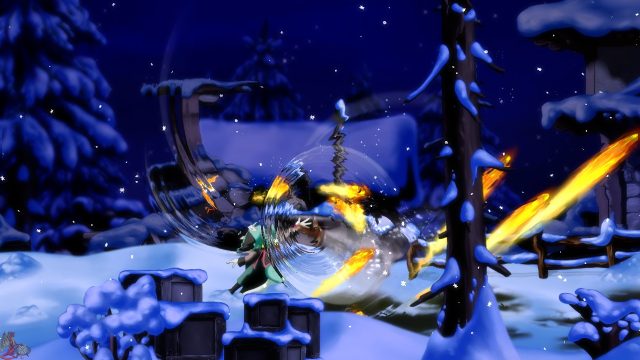 Swirl in a DUST STORM!

Continuing on Dust‘s personal journey, the soundtrack is lovely ear candy. Each track adds a string of emotional connection to each part of the plot, and no track feels the same. The music fits the overall tone and spirit of the game, and the track’s placement is very mindful to the events of the story. The game is also fully-voiced, and for the most part it’s very competent and does well in conveying the story while also adding touches of humor through Fidget when necessary. It’s not perfect, but it does get the job done.

Since Dust is a 2D side-scrolling action RPG, its combat is a wonderful blend of simplicity that has just enough depth to keep it engaging. Dust can learn new abilities throughout his journey, and each talent learned adds a new skill set to his arsenal. Using Dust Storm allows Dust to whirl enemies into a vortex of wind, while also launching them all over the map. Fidget can also provide backup as holding B allows her to launch projectiles while Dust hacks and slashes. Since Dust Storm can be performed in any direction, having it and Fidget’s projectiles obliterate enemy’s makes for tons of entertainment. By performing moves in succession, Dust’s combo meter will rise and provides bonuses to his experience based on how high a combo is executed. There’s no greater joy than succeeding on a 1,000 hit combo, and then diving back into the combat to create even more carnage. While the combat does get repetitive at times, every location has lots to discover and using each of Dust’s abilities in and out of combat allows for tons of exploration and new goodies to be uncovered.

Although the combat has some repetition involved, the game’s difficulty also tends to fluctuate. Some boss fights are not as challenging as they could be, while others can be rather demanding. It’s easy to get into the habit of assuming that all enemies will die with the same attacks, so it is important to pay attention to enemy types. Simple hacking and whacking doesn’t always work. Despite this there is a lack of variety in the gameplay, as players will traverse each area, repeating the same tasks over and over. Although the sidequests are well done in terms of storytelling, as they fall mostly into the fetch quest camp, which makes them fairly easy to ignore. Character progression is also very hands off, and it would have been nice to have some input over how Dust grows in terms of his skills.

In spite of these flaws, the positives clearly outweigh the negatives. The game is a cohesive and stunning effort that keeps you coming back for more. Humble Hearts should be applauded for all of its efforts in creating such a believable and well-thought title that evokes pure emotion, while also single-handedly crafting the entirety of the game. I was not expecting to fall for Dust: An Elysian Tail, but its passion and efforts completely won me over in ways I wasn’t expecting. There’s so much to fall in love with, and Dust’s journey is something that at some point in time we can all relate to.