Dungeons & Dragons has a long and storied history in the world of video games. As the grandfather of roleplaying games as we know them today, many games, particularly those coming from the west, opted to use a direct translation of their rules for their titles. None of these were more popular than BioWare’s many PC titles. Games like Baldur’s Gate, Icewind Dale, Neverwinter Nights, and Star Wars: Knights of the Old Republic helped make D&D Edition 3.5 famous even among gamers who had never played a tabletop game in their lives. However, since 2005’s Jade Empire, BioWare has left that ruleset behind in favor of its own custom designs. Enter Dungeons & Dragons 4th Edition, an updated ruleset that made D&D more accessible in the hopes of sparking new interest in tabletop gaming. Dungeons & Dragons: Daggerdale is the first video game to make use of these new rules.

Sadly, Daggerdale doesn’t spark the same sense of adventure and intrigue that BioWare’s grand, sweeping epics did. Its plot is fairly minimal: as one of four heroes, you’ve been tasked with stopping the villainous Rezlus from razing the land of Daggerdale to the ground. The game takes players through three settings, all of which look fairly similar. There’s a dwarven mine, a cave system, and then another cave system interlinked with some crumbling ruins and a dungeon. The story involves completing several mostly meaningless fetch quests that ultimately let one progress to the next stage. There’s no actual roleplaying present here apart from whether one accepts or declines a quest, and of course it’s impossible to progress if one declines. 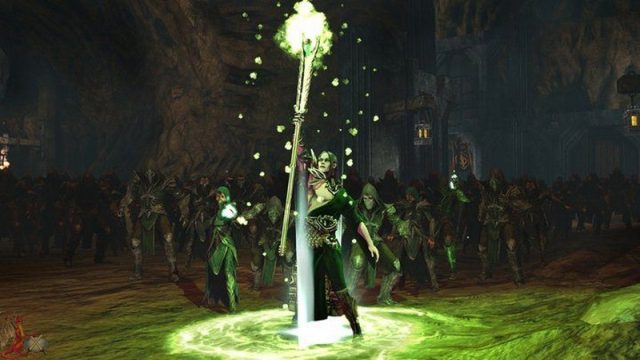 The game can be surprisingly attractive when it hasn’t be torn into several pieces.

Daggerdale‘s combat mechanics manage to inspire a bit more confidence. Dungeons & Dragons 4th Edition is smoothly interlaced with an action-combat system, handling the behind-the-scenes mathematics while the player controls everything in real-time. As characters level up, they learn new powers that can be used at any time, barring short cooldown periods. Basic melee and ranged attacks and various powers can be linked to one of seven hotkey slots, an interface that anyone familiar with recent PC-to-console RPG ports should be well-versed in using. Once engaged in combat, Daggerdale is surprisingly fast-paced, much more akin to a hack’n’slash game than the tactical-oriented titles that D&D is known for. Each class also has a unique defensive ability that can be activated with the right bumper. For those who want to adventure with a friend, Daggerdale supports local and online multiplayer.

Despite this, Daggerdale is simultaneously disappointing thanks to excessively limited customization options. The game only features four of the eight character classes provided by even the most basic D&D rules. Each of these classes has a preset race, gender, and appearance, eliminating any possibility of making these characters one’s own. Once the game begins, the game caps out at level ten, and most players won’t even make it that far before it ends; I beat the game at level eight. While each class has several powers to choose from, due to the way they’re acquired, by level ten each character will have all but one or two (depending on class) maxed out. Characters will vary from person to person only in minute and mostly irrelevant ways.

Dungeons & Dragons: Daggerdale is also riddled with bugs and lazy design choices. There is severe screen tearing throughout the title’s brief duration, as well as several display errors when calculating stats. By far the worst, however, is repeated instances of controls becoming completely locked out. During my playthrough I completely lost control of movement several times, was unable to open the menu once, and was even unable to change key bindings a few times: the buttons simply would not respond. 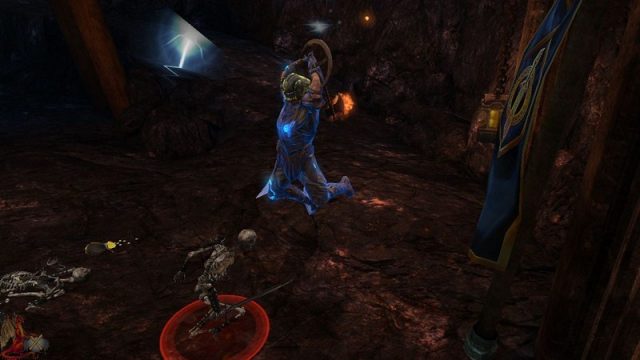 Someone should have given this game the axe.

Many basic interface options also reek of lazy design. Players can only accept one quest at a time, despite the presence of several sidequests scattered throughout the game. Once a quest is accepted, it has to be completed before the game is turned off. Although players can save their progress during a quest, keeping any experience and items gathered, any progress in the quest itself will be lost and must be redone. The game’s camera angle is limited to two viewpoints and has no vertical control, the map cannot be scrolled, and players must go through multiple prompts every single time they want to sell an item. Even RPGs released fifteen years ago are more user-friendly than this.

Despite the severe screen-tearing issues, Daggerdale isn’t that bad to look at. Character models are well designed and animated, and the final boss in particular is quite impressive. The environments are disappointingly bland, but not terrible by any stretch. Daggerdale features minimal voicework, which is done fairly well, and the music is decent but forgettable. While it certainly isn’t the prettiest game to appear on the Xbox Live Arcade, the screen-tearing is really what brings it down, not the artwork.

Ultimately, the one thing that Daggerdale manages to accomplish is providing a proof of concept: Dungeons & Dragons 4th Edition can work well in a video game. Unfortunately, Daggerdale is not that video game. Buggy, flawed, and bland, Daggerdale is the dice without the creativity of the players throwing them. While I’m sure we haven’t seen the last of 4th Edition in the video game world, it’s safe to give Daggerdale a critical miss.