Crunchy and Good with Ketchup

At the start of the year I availed myself of some traditional Japanese blind-bag bargains, getting four PS3 games at random for 7000 yen. I next went to the second-hand game stores to rid myself of the ones I didn’t want or need. In the end I had 7500 yen in pocket and a single game in hand: Dragon’s Dogma. As I had, in theory, gotten it for free, I felt obliged to at least give it a try. I’m glad that I did.

At first glance, Dragon’s Dogma doesn’t look much like a Japanese game. Its graphical style is much closer to the quasi-realism of recent western titles, despite the large Capcom logo plastered onto the disc case. There’s nothing of anime to be found here — not in the monsters, not in the people, and certaily not in the environs of Gransys, the tableau upon which the game is set. It is the polar opposite of Capcom’s Breath of Fire series in many ways, save one — the scaly, oversized, fire-breathing monstrosities that hold it all together.

The nice thing about dragons is that they can justify pretty much anything, and the plot of this game is an example of that. The hero is propelled forward by the need to reclaim his or her heart from the clutches of the great dragon, which has taken it for reasons unknown. The inevitable showdown casts a long shadow over the rest of the game, crowding out other subplots that might have filled in the details of a world drawn in broad strokes by its central conflict.

Plot occurs in regular bursts determined by the spacing of important quests, but in the meantime the player will mostly be fetching, carrying, escorting, or slaying in the course of more mundanely generic quests. The unfortunate thing about some of these is that they come with conditional expiration dates tied to the primary plot, with no warning that this is so. There is one secondary quest line which must be begun early if it’s to be done at all, but doing so is not easy for a newly created character. The Duchy of Gransys is a dangerous place for low-level heroes, and those early, missable quests often lead the player through areas more challenging than is advisable. Other quests serve to present and support important NPCs, whose relationship with the main character can influence certain events late in the game. The issue here is that the relationship quests seem to skip ahead, leaving the impression that more could have been fitted in between them to better flesh out the NPC’s portion of the story. 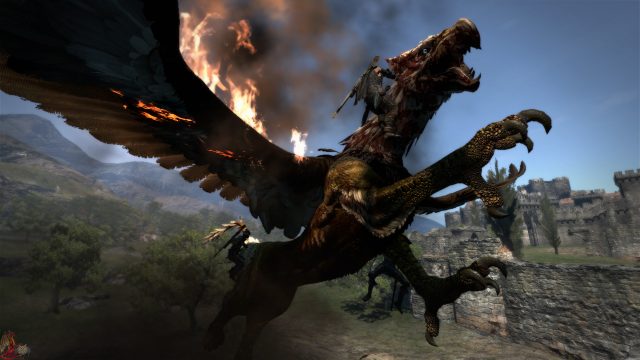 By mid-game, the player will have seen most of Gransys, often multiple times. Teleportation to places besides the capitol at Gran Soryn becomes available very late in the game, so would-be heroes are obliged to trudge forth along the same routes frequently. While reinforcing the sense of an excursion into danger, more work could have gone into varying the experience. Giant monsters and the occasional random rescue quest notwithstanding, by the time the player is halfway through the game most of the danger zones are either well known or no longer a challenge. Dragon’s Dogma changes things up dramatically in the so-called post-game, with upgraded monsters and lesser dragons popping up all over, but the game may have been better served by having more than one such event sooner to increase the challenge in early areas.

As far as combat is concerned, there are several ways for the player to proceed. There are straight-up melee, archer, and magic type classes as well as a few that blur the lines a bit. Each class brings different strengths and weaknesses to the table, and after reaching level 10 the player can freely switch between them for a small fee. While active skills are restricted to their proper classes, passive support skills can be carried over for some mixing and matching. 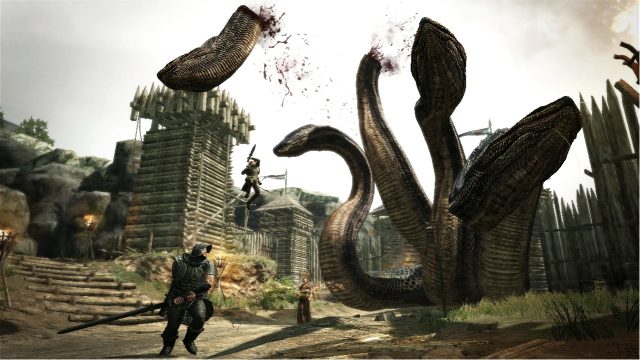 Off with its head!

Whatever build the player chooses, it will be put to the test soon enough by the true stars of Dragon’s Dogma, the oversized monstrosities that plague the land. Cyclopes, hydras, chimerae, golems, griffins — not to mention the Dragon himself — dominate their turf and require different tactics to take down. An interesting addition to the standard action RPG format is the ability to grab enemies (if small) or clamber up them (if large). This leads to often frantic, but memorable, confrontations. The grab-and-climb mechanic does not extend to rock walls or trees, however, even where it might prove to be useful.

Backing the player’s hero up are the pawns. These enigmatic warriors lack any real will or personality of their own, but instead are sworn to follow the orders of the Arisen (i.e. the player). One pawn will be original for that player, and progresses through levels of experience similarly to the hero. Up to two more may be kept at any time. Capcom decided to make this the backbone of the game’s online component. All recruitable pawns belong to actual players, fellow adventurers who have blazed the trail beforehand and imparted that knowledge to their pawn servants. Depending on its bank of knowledge, a pawn may know the way through a quest or the best way to take down a monster. Beginners may find that their minions have a better handle on a situation than they do. One thing that pawns are terrible at is conversation. It’s obvious that much of their commentary is preset, as the same lines are regurgitated at specific spots, often in ignorance of previous experience and occasionally contradicted by the local scenery.

For arcane reasons known only to the Capcom developers, Dragon’s Dogma conforms to a PS3’s personal language settings, meaning that a Japan-bought copy can be played completely in English. This may not be as much a comfort as it sounds, as the game’s translation makes heavy use of odd vocabulary to approximate olden-time English without having to worry about those tricky, long-forgotten conjugation rules. The skills list would be even more of a cipher to anyone without a strong grounding in the language, as many spells and support skills are obviously derived from existing (if overly erudite) vocabulary. The citizenry of Gransys possess a spoken idiom that seems designed to convey a medieval European air without descending into Shakespeare. It gets points for being applied more evenly than the NPC accents, which tend to be literally all over the map. 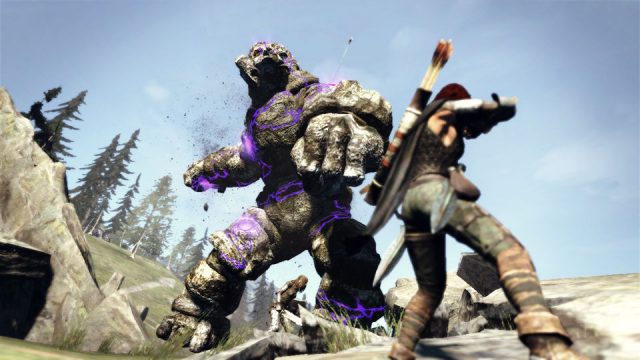 The spirit of Harryhausen commands you!

As far as background audio goes, this game prefers to keep it unobtrusive. Many areas are provided just environmental noise as an accompaniment, with battle music only cutting in when one of the larger foes is encountered. At other times, such as late at night, strains of music will waft through the air to add to the mystique. The music all fits well with the game with the exception of the start screen theme, which for some reason is J-rock with English lyrics.

Dragon’s Dogma marks a radical departure by Capcom from much of what has come to define the Japanese RPG genre. So far, it seems to have paid off. The main complaint to be levied against it is a lack of variety as the game progresses, but as a major expansion (titled Dark Arisen) is only a few months away, it seems likely that those issues will soon be addressed as well. Whether or not this expanded version will be successful remains to be seen, but I can say with certainty that I will be putting down real money for it when it arrives.