The first Dragon Quest — or should I say Dragon Warrior — was the first console RPG I ever finished. It captured my interest right away, and I spent many hours hunting down the infamous Dragonlord. Each new Dragon Warrior title maintained the same indefinable feeling that defined the series, and captivated my interest just like the first time.

Fast forward to this year, and the latest Dragon Quest game has arrived in North American, free at last to use the proper name of Dragon Quest for the first time. The longtime developer, Heartbeat, is no more, so Square Enix turned to Level-5, who gained recognition with their work on the Dark Cloud series. An entirely new development team typically brings their own feel to the game, but this is not the case with Dragon Quest VIII. Mr Horii’s vision for the look and feel of a proper Dragon Quest game is still prominent, despite the new development team.

Dragon Quest VIII is the series first use of cel-shading graphics, a style Level-5 excels at. Unlike the questionable response when the Legend of Zelda attempted to use the style, the fan base of Dragon Quest accepted the change as just another evolution of the series. Now that I’ve experienced the style first-hand, I have to agree, it just works with Dragon Quest. It’s very difficult to make characters look truly dark and terrifying with cel-shading, which is another reason this style works in Dragon Quest VIII. The large varieties of monsters in the realm of Dragon Quest have never been shown as looking to scare the hero, more simply they are there to impede his exploring of their territory.

The look and feel of the series is one of the great things about it, but without a doubt the main draw is the stories. Dragon Quest VIII is no exception for great story-telling. The game starts with the hero traveling with a toad, a horse and wagon, and a ruffian named Yangus. It turns out the toad is actually the king of Trodain, and the horse is his daughter, Princess Medea. The band is searching for a jester, Dhoulmagus, who is responsible for the two transformations. They seek the advice of a wise man in the next town, and start traveling away from Trodain on a journey that will cover the entire world.

It is rare when an RPG storyline stays believable. In many games, the hero quickly gains ambitions that are just short of a god complex and suffers under the illusion that he alone can save the world from destruction. In Dragon Quest VIII, the hero’s only goal to serve his king, who desperately wants the curse to be broken, so not only can he return home as a human, but that his castle and kingdom will also be restored to their former glory. They may have to save the world along the way — this is a game after all — but the feeling that they planned to do this all along is never apparent. 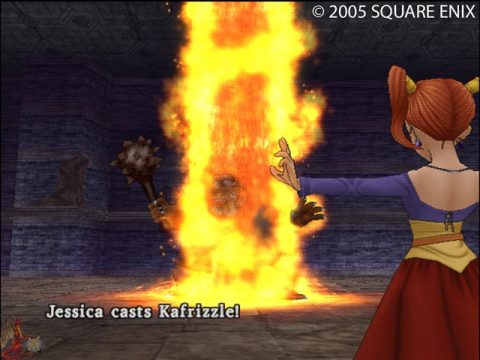 On the journey to find Dhoulmagus, the hero will gain a few allies and run into hundreds of different monsters. Dragon Quest VIII uses the same menu-based battle system the games have used for over 15 years. The player selects what actions to take for the round, and based on the agility stat for all characters, the actions are played out for the entire round before more actions can be selected. Besides the typical Fight, Spells, Items options, there is a key action of Psyche Up. For the turn, the person will increase their tension in the battle, making their next action more powerful. Tension can be increased in increments of 5, 20, 50, and occasionally 100. When a character reaches a tension level of 50, the game announces they are in a state of high tension, and when the tension reaches 100, it announces they have reached a state of super high tension and their bodies glow from the power within. Once the tension is released in some way, the glow dissipates and the character’s appearance returns to normal. Early on, King Trode will make suggestions to use tension in battles to become accustomed to it, and its mastery is essential to surviving some of the more challenging battles to come.

Challenge is another rare aspect in RPGs these days. In many games, a death means the player made a mistake rather than that the game was actually outplaying the player. Dragon Quest VIII is not for the faint of heart. Early in the game, it is important to level up before taking on the next boss. After level 20, the amount of experience required to level starts increasing dramatically, slowing the leveling curve down. Instead of a level for each character in roughly an hour, expect to level every two or three hours, unless hunting in a high metal slime area. With this change in experience, victory relies more on the strategy of attack, and items available, and less on the level of the party. The exception to this would be if the next level opens a critical skill that can be used to change the tide of battle. Dragon Quest VIII keeps to the Dragon Quest tradition that with an ounce of bad luck, the party can be wiped out at any time with death-to-all moves from various monsters. 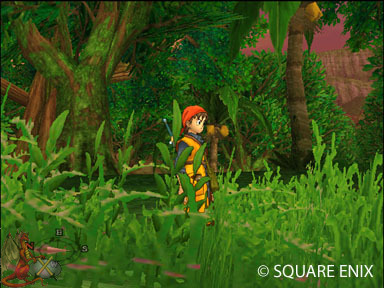 We’re not lost, I swear!

With over 100 hours of playtime, not once did the music in Dragon Quest VIII become boring; a true sign of a great collection. Many Dragon Quest fans will recognize renditions of older songs dating back to the original game. As a special treat, the North American version has a special orchestrated soundtrack, further enhancing the auditory enjoyment.

The voice acting, using exclusively British voice actors, adds many different aspects to the game. First and foremost, it helps distance Dragon Quest VIII from the rest of the pack, by giving it a unique sound and style. With voice actors most people have never heard before, distractive recollections of the voices from other games or movies is absent. The quality is also top notch. Almost every character is full of emotion, easily drawing the player into their story. The use of numerous dialects gives the world a diverse feeling missing from most games.

Dragon Quest VIII brings out the best that Dragon Quest has to offer: a solid storyline, with realistic characters fighting unrealistic monsters. It’s a game designed to capture the mind and heart of the player and let them live in the world of Dragon Quest. Just like 15 years ago, I couldn’t put this game down for long. Dragon Quest VIII is easily the best RPG of 2005, if not this console generation. It’s a must-have title in anyone’s RPG library.