These Pocket Dragons Can Bite

The Dragon Quest Monsters spin-off series had been on quite a hiatus. The last game was released over six years prior to the North American release of Dragon Quest Monsters: Joker. After such a long time, do the creators still know what made the original two games a joy to play? Would the monster pit from Dragon Quest VIII be enough to entice the new generation of RPG lovers to want to deal exclusively with monsters?

Instead of focusing on simply defeating monsters, Joker‘s story requires our hero to team up with monsters. This presents a dilemma: why do you want to team up with monsters? The story revolves around a monster challenge, in which scouts are sent out to the multiple islands to locate and tame the monster population. Using monsters in battle trains them to become stronger, hence making it possible to find harder monsters to tame and use for the challenge. Unlike the previous titles, there is only one main challenge at the end. The previously used ladder system has been downgraded to an optional battle arena on one of the islands.

The story itself starts off pretty dry, but it does develop a few twists, though nothing that would catch an experienced gamer off-guard. The hero is the son of the leader of a small organization known as CELL. It is known that they study monsters, but not why. You are assigned to investigate the Scout Challenge, but winning isn’t your main agenda. Early in this quest, you run into a monster never seen before. By befriending this special monster, the real story begins.

Each island has a danger level assigned to it and each monster has a rank. From this, one might think that each island would have matching ranked monsters, but it’s not the case at all. While the first island has the lowest monsters, there are plenty of later islands, with higher ranks, that still have relatively low ranks of monsters. What the danger level actually represents is the level of the monsters and how much damage they can do to the party. In order to capture a monster, the scout must impress it with his current team. Instead of dealing damage, the Scout command will strike the monster, raising its percentage of influence; and the chance of success. For a good chance to recruit, the team should be able to defeat the monster easily. However, even a 1% chance is a chance for success, so it is possible to recruit something well above the current level. If the Scout fails, the monster may become insulted, raising its tension, as well as the tension level of any other monsters in its party, for one round of beating. Recruiting monsters is only the basic element of creating the perfect team. If one wants the truly elite monsters, they’ll have to make them through synthesizing. 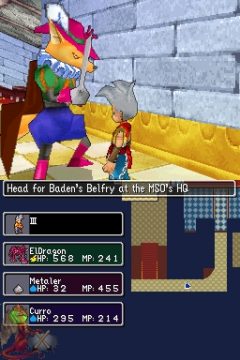 Synthesizing monsters is another way to say monster fusion — two monsters become one. In the hopes of creating a stronger monster, two monsters are selected at the synthesizing counter. One monster must be of the plus gender, and the other the minus. Sometimes a monster will have both genders available, making the matchmaking a little easier. From these two monsters, stats and skills are inherited. If one of the monsters mastered a skill set, a more advanced skill set may become available. For example, mastering the Attack Boost skill set will open up Attack Boost II to its offspring. This natural progression of skills makes a big difference in the strength of the monster, so it can’t be ignored. For such an essential piece, it’s barely given a passing mention in the game itself. The entire philosophy of the training is based on figuring it out on your own, with very little in-game hints given to the hero. This can be frustrating at first, as the difficulty may ramp up with no reason, but the game has expected the monsters to have progressed to a certain point, not just in rank, but in skills. Failure to keep pace in both areas can result in a frustrating experience.

Unlike the typical Dragon Quest games, the level of the monsters isn’t the most important element. Since a new synthesized monster starts at level one, it’s not critically important to level each parent monster to a high level beforehand. A good strategy would be to level it enough that it can master a skill set, or at least give its offspring enough points in that skill to be able to master it in its lifespan. The experience required for the higher levels grows exponentially, meaning it’s not always practical to push the levels as high as possible before moving on. The islands themselves are not that large, and it’s easily possible to reach maximum potential without constant grinding. Once the monster has reached that perfect form, then leveling to max out the final stats would be the only true need to grind. As in other Dragon Quest titles, the metal family will help a lot with this final obstacle.

Dragon Quest‘s move to the Nintendo DS means a lot less visual real estate to work with. Fortunately, this doesn’t affect the game as much as some people might think. The monsters look close to how they did in Dragon Quest VIII, just on a smaller, less detailed scale. The islands are about as varied as they could be, from swampy jungles to arid deserts, and everything in-between. Different monsters roam the lands freely for the scouts to engage or avoid. Most of them are aggressive via sight, so it’s possible to sneak around unwanted monsters. All the visuals are bright and colorful, the monsters befitting their surroundings. Nothing feels out of place, except for how such a varied collection of landscapes could emerge so close together. There is no snow area, however. The transitions from day to night are also well done with the lighting changing as the dusk or dawn draws near. The day is much longer than the night, but certain monsters only appear in the dark hours. Not to worry, if a specific time period is needed, simply rest until the beginning of the desired cycle. 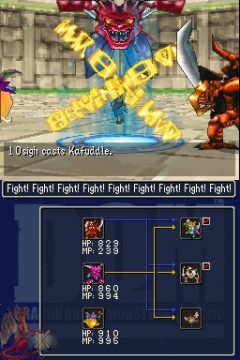 They may look tough, but online, they’re creampuff.

The Nintendo DS touts a touchscreen, and Joker makes good use of it. The menus are large and easy to navigate. The data for the monsters is easy to find, and the menu designs in general are well spaced; nothing feels cramped within the two screens. If one had to find something to complain about, it would be the complete lack of a back icon. The only way to leave a menu is to press the B button. For a game using the stylus for all menu controls, this seems awkward. The only way to move the hero around is the D-pad. After all the complaining heard lately about having to use the stylus for movement in other games, Joker shows why it should be the preferred method after all. The D-pad is inadequate for navigating a 3D world. A compromise was to always press up to move and steer with the L/R buttons. This worked best for what was otherwise a cumbersome control scheme.

Like a typical spin-off series, the music is almost entirely based off the main series. There is very little original music to be heard. This was a tad disappointing, but Dragon Quest has been using modified versions of the same music for over a decade, so it was no true surprise. At least the DS does a splendid job of letting the music live on. The sounds of battle are also straight from the main series, with the same chirps and twitters expected. It’s still surprising that at this day and age that the monsters make no unique sounds at all. A giant dragon and a tiny slime have the same attack sound. As mentioned before, it’s not only a surprise, but also a minor disappointment.

One true disappointment for the game is the online play. The idea was that there would be no live online battles, but instead copies of teams would be uploaded for people to battle. There are no friend codes, so there’s no way to find only your friends. There’s local Wi-Fi battling, but by now, it should be well established that if we had a plethora of friends around, we probably would have never been pulled into RPGs in the first place. Thus, the only option for online play is to battle everyone who has played the game online, regardless of how long they’ve had it or how they made their teams, legit or not. This is clearly an obstacle for anyone who plays casually or the latecomers to the game, as the top slots are already filled with seemingly unbeatable monsters without serious dedication. For a relatively easy-going title, most players simply are going to find the online section not worth exploring. The items given for joining are so-so, and even the best items for claiming the top spot mean little by the time the required perfect powerhouse team has been assembled.

In the end, Dragon Quest Monsters: Joker is an enjoyable monster battling RPG with a better story than expected. If you’re a fan of the Dragon Quest series, then this will be right up your alley. While it’s not recommended as an introduction to the series, a lack of Dragon Quest knowledge should not be a deterrent in any way.