Lacks More than a Muffin Button

Considering it involves characters continually getting stronger to conquer ever more dangerous menaces to the planet and universe, Dragon Ball Z ought to be an easy transition to RPG form. Between all the fighting games spawned by the series, plenty of developers have indeed tried translating it into an RPG, with Attack of the Saiyans standing near the top of the pile. Dragon Ball Z: Harukanaru Densetsu represents the forever-darkened bottom of that pile, a game that manages to be repellent no matter how devoted a fan of the series one might be. How Atari brought it across the Pacific with such an ungainly untranslated title is a mystery, but probing deeper is only advised for masochists.

Harukanaru Densetsu takes inspiration from the many card-based RPGs made with the license and extends the concept to resemble a board game. At the start of each scenario the player is granted five cards with separate values from one to eight for their offense and defense. The offense number is used to move around the board, and the defense number determines whether a random opponent will force the player into battle when movement is done. Trekking around the maps is accomplished solely via the cards dealt, and sometimes the game doesn’t supply any with high numbers to facilitate quickly moving a great distance. Certain spots on the map advance the story or prompt set battles when reached, while a few random items are available by exploring marked nodes across the board.

In battle the cards also dictate every action. The player picks a card and doesn’t see the enemy’s choice until after making the selection, whereupon the side with the higher offense wins and executes an action. At first players are limited to using one card at a time, but the game eventually supplies three means of combining cards for stronger hands. This advantage doesn’t last long though, as enemies are also prone to using card combinations. The luck of the draw is the sole determinant of which side wins, and if the game fails to provide adequate cards to trump whatever a particular boss is using, then the player just has to soak it up and remain hopeful. Since some later maps can take an hour to traverse and lack any save points along the way, losing to bad luck is quite infuriating.

The developers of Harukanaru Densetsu displayed an astonishing reluctance to borrow from any of the series’ movies for inspiration about how to make filler material, considering unique scenarios such as Vegeta beating up people in his mind and Gohan clearing out a map of Freeza soldiers were invented wholesale. The game instead features recycled content constantly, forcing players to go through separate maps from the perspective of different characters who go through the same events with minor variations. Freeza is a good example of this, in which three characters must move through a stage that culminates in a battle against his first two forms — and only after all of them do this does something new appear. In addition to fighting the same opponent multiple times with different people, often the same person must repeatedly do battle with an identical opponent inside a stage, such as Gohan being forced to fight Vegeta six times without a break. Random enemies are no better, as the developers have a total of seven non-boss opponents in the whole game — and Cell Juniors only appear in the last few levels. Otherwise the player should get used to fighting three varieties of Freeza soldiers and Saibamen, as they stick around even after all the baddies who ever had anything to do with them are vanquished. 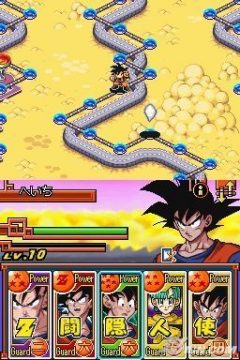 The real Goku would probably try to eat this board instead of moving along it – assuming the scent of bacon was present.

The initial challenge is not great, but Harukanaru Densetsu slowly ramps up the number of things that can go wrong. Certain foes, notably a couple of Androids and Cell, can heal themselves when landing damage, exacerbating the length of time needed to beat them down. The damage dealt and sustained by the player’s side slowly errs more and more on the side of the AI, unless significant grinding is done to even things out. Grinding in this game requires replaying completed scenarios in their entirety though, which is hardly the most entertaining way of proceeding, especially when the text of those maps is also fully repeated each time through. The core game is already lengthy enough to push past forty hours, but constant grinding only drives that time further up.

Another way in which difficulty is increased stems from the game’s inventory, which is inextricable from the card system. In order to use an item, the necessary card type must appear, and if in battle it must beat the enemy’s hand. If both of these conditions are not met, it does not matter how many healing items a character possesses, because they are untouchable. A related problem arises if the game supplies nothing but card types that cannot attack the enemy — no matter how strong they are, the player still has to wait until one of the varieties that can deal damage is dealt.

Harukanaru Densetsu depicts the story of Dragon Ball Z from Raditz’s arrival until Cell’s destruction, a scope that required 200 episodes of the original series. Even from the alternating perspectives of four protagonists this game leaves things out, and text told by talking heads with unchanging expressions does a disservice to the kinetic energy of Akira Toriyama’s original telling. The uninitiated are not likely to be captivated with the events depicted, while Dragon Ball veterans will be sore at the inferior presentation. This is not a localization to be particularly proud of either, with misspellings and strangely-worded sentences a common finding. 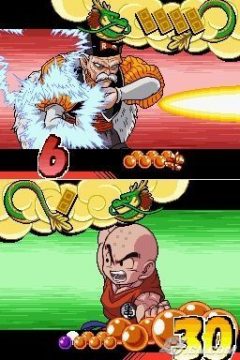 Get ready to see Dr. Gero block in exactly the same way dozens of times!

While wandering around the maps, Harukanaru Densetsu features visuals that could have been done on the SNES but are nevertheless pleasant. Its battle graphics are less attractive after constant exposure, mostly because they use still images of characters with speed lines to indicate movement. Strong attacks are granted flashy lightning and purple flame effects, but the core pictures remain unchanged. At least each combatant has more than one attack still, but the same picture will be deployed every time someone takes a hit, and this means notable adversaries will be seen in the same pose enough times to render unconscious anyone who tries to turn this into a drinking game.

Some of the maps in Harukanaru Densetsu feature pleasant tunes that make exploring them less tedious, and most of the battle music is also worth hearing. The exception to the music is that heard when fighting Androids, which is a piece of electronic white noise that deserves prompt muting. There are also vocal clips from the English cast of the show, which are also heard often enough to become annoying.

Somehow this game’s release attracted almost no attention at the time, and it’s been almost completely forgotten — the name doubtless didn’t help. My ardor for Dragon Ball has diminished over the years, but I still had to sample it. Harukanaru Densetsu accomplishes the amazing feat of making The Legacy of Goku look good in comparison, an accomplishment that ought to frighten everyone.