Somebody Put Something in My Drink

In between releases of the Mass Effect series, BioWare started a new franchise with another kind of audience in mind. Dragon Age: Origins showcases a world reminiscent of The Lord of the Rings that comes alive through BioWare’s usual mix of dialogue and questing, a combination done as effectively here as the company’s past would indicate. The Ultimate Edition puts the numerous DLC content together with the original release to fashion a game which gives tremendous value for the money, and the great time I had with most of what it offers is evidence of BioWare’s skill.

The nation of Ferelden is suffering increasing Darkspawn incursions in recent months, and the signs all point to a new Blight that will raze the land. Hopes are high that a union of martial power can stem the Darkspawn hordes, but they are dashed by the refusal of Teyrn Loghain to commit his forces to battle. Absent that aid, the king and most of his army is slain on the field of Ostagar. The player takes the role of a newly-minted Grey Warden, one of the group whose mission is to battle Darkspawn, with the task of calling in old treaties to put a new army together in order to stop the Blight.

The player gets quite a bit of say in what type of protagonist Origins has, and the opening scenario varies dramatically depending upon race and job type. Major plot beats are pretty much the same no matter what the player has been doing, and the overall story trajectory will startle no one with any fantasy literature experience. BioWare does an excellent job of making its characters come alive though, and the interactions with the fascinating cast stay entertaining throughout. While the overall plot is firmly set, many of the components can be altered by player choices as the narrative progresses, and despite its unoriginal nature Origins‘ story remains gripping from beginning to end. It also includes an enormous quantity of codex entries that fill out the world, and by themselves encompass several hours’ worth of additional reading.

Combat in Origins, at first glance, seems to be that of an action title. Once a target is selected characters will continually attack it until one side is downed, and using any kind of technique at first seems to be a race against the clock. Fortunately, action can be paused at any time so that the player may direct the action with considerably more finesse, lending events a more tactical feel. Not very many enemy varieties will be encountered as the game progresses, but they appear in a great number of different formations occupying terrain that often lends an advantage. Even on the easy setting, rash playing will lead to being forced to reload the last save, but attention to detail and a little patience balance the odds. 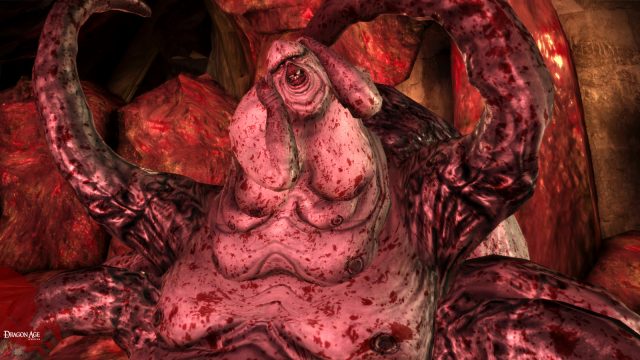 A horror movie offshoot starring the Brood Mother is going to happen someday.

Characters are also given free reign to develop, and the multitude of ways in which this can happen allows an enormous variety of stratagems to be deployed in facing the foe. Should the player wish, setting down traps and leading the enemy into them is a viable tactic, as is charging forth in a mad bull rush that attempts to knock down everything in the way. Each character has multiple skill paths that the player can progress down, and since gaining enough experience to select everything is not feasible, these decisions have consequences.

Origins lacked an overhead viewing angle for its original console release, something that is mostly fixed for the Ultimate Edition on PC. The game occasionally betrays this angle’s later inclusion if the camera is near a physical obstruction that forces it down, but is usually the preferred way to observe the surroundings. Even the overhead view is sometimes not enough to allow the player to see from where ranged attacks are originating, but it works far better than trying to divine useful information from the default ground-based vision.

BioWare’s inclination is to include plenty of goods from the surroundings, both in the form of enemy loot and various things that can be investigated. Finding all of this stuff in the first place can be taxing, though holding down a key to highlight all points of interaction on the screen helps immensely. The large areas of Origins combined with a plethora of items to be acquired threatens to quickly swamp the available inventory space though, and the immense difference between what merchants charge versus what they pay for product means holding onto everything is a good idea. With a little practice, and the purchase of every available inventory limit increase, packing the party’s sack as much as possible gets easy, but it’s still time-consuming. 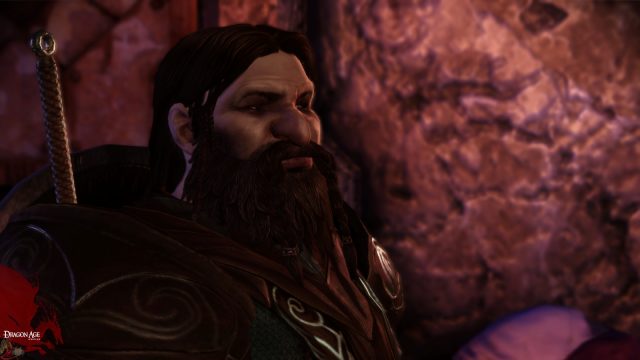 Even at his most drunk, staring intently at a dwarf from this distance is considered extremely rude.

The core of Dragon Age: Origins is a meaty piece of content that can last fifty or more hours if one attempts to do everything, but the Ultimate Edition adds in all the DLC released months after the original title. Put together this makes for an experience that could last over eighty hours and go on after the core story’s conclusion. Variety is employed throughout, ensuring that the proceedings never get overly repetitive.

Visuals in Origins are solid without being superlative. Architecture and landscapes look good and distinct but do not impress when closely examined, while character expressions are a problem to get across. The quantity of places present in the game is impressive though, and unique visuals for the enormous variety of equipment characters can use deserves an accolade. Every line of dialogue not spoken by the protagonist is voiced, and the performances are strong across the board. This is coupled with effective and pleasant music to accompany the action for a strong audio presentation.

Dragon Age: Origins continues the trend of BioWare games doing an excellent job of immersing me in their worlds, and playing the Ultimate Edition is a great value. Sure I wondered why significant load times popped up even after downloading the whole twenty-five gigabytes to my hard drive, but the experience was enough to make that a minor issue, especially when my machine isn’t a top-tier rig. The sequel’s reputation means I’ll take a break before trying it out, but this is another winner in the BioWare catalog.