Dragon Age: Origins – Awakening is the first full expansion for BioWare’s new RPG series. It’s a mixed experience, because as an expansion it does many things wrong, but if treated as a stand-alone experience it is as impressive as the main game in many aspects. While clearly not as massive as Origins proper, this add-on does give a nice chunk of content that could have easily been expanded into a full game all by itself with just a little more depth.

The main reason Awakening has problems as an expansion is how little it draws from the main Origins experience. Players are able to import any character from the original, regardless of whether the game was completed, and ignoring major endgame decisions that might have been made. This adds an enormously offsetting disconnect from the initial experience. Players can also purchase books to allow the player to reset their Warden’s skills, so that further confuses the issue. Any who want to step back into the Grey Warden’s role should know that it will mostly be for the money and equipment that transfers or a personal connection to their original character. Thankfully, new armor and weapons are bountiful and sovereigns are very easy to come by, so it’s not a major issue to avoid the import. So whether RPGamers opt to bring their Warden out of retirement or create a new Orlesian Warden, the overall experience is not going to be extremely different, as it focuses on a completely new adventure.

This new quest begins shortly after the end of the first game and places the player in the role of the new Grey Warden commander at Vigil’s Keep in the Arling of Amaranthine. Upon arrival, players find that darkspawn have stormed the Keep and must be fought off. While clearing out the darkspawn, it’s made clear that something has changed and these mindless monsters are acting differently, with more organization. After meeting some new faces intermingled with old ones, it is made clear that as commander of the Grey Wardens, it is your job to discover what caused the change in darkspawn behavior. However, this isn’t just a repeat of the original where players are sent out to war. One major change is as commander of the Arling, protecting their land from this threat is up to you. Not only is playing general now a part of the game, but some major political decisions must be made, some of which will have significant impact on the story. 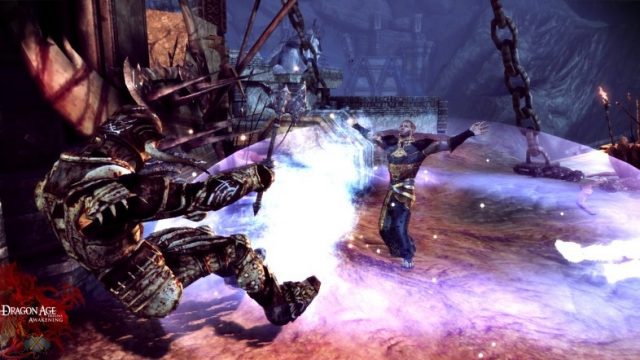 Think he’s cool? Just wait till you find him a kitten.

This new perspective is what really helps the game feel like more than just an expansion, as it takes players down a completely new path, mostly independent of the original plot. At times it feels more like a mini-sequel, as a new set of characters is introduced. This ends up being both good and bad. On one side, most of the characters are fairly interesting and original. One example is Anders, a laid-back mage who attempted to escape from the Circle of Magi multiple times. He’s one of the first characters met and helps to inject a good bit of his humorously aloof personality into the otherwise dramatic story. For each playable character, players have an option to either recruit them or let them go a different way, though ditching them is pointless. The downside to these characters is that, after they initially join and possibly with the exception of a side quest or two, they’re all ancillary. They lack the depth needed for fleshing out and tying into the main quest in the way Origins did, which is a shame because they all have a lot of potential. At least their incidental dialogue is entertaining, especially Anders and his kitten Ser Pounce-a-lot. Overall, the strengths of Dragon Age: Origins are all here, but in small, scaled down versions. It would have been nice to have more meaningful choices and stronger character depth, because the foundation created here is solid. It is nowhere near as epic in scope as the original game, but serves quite well as a smaller, standalone mini-sequel of sorts.

The gameplay foundation is very similar to that in Origins. Combat and interaction are unchanged at the core, though there are additions to character development such as new spells, skills, and equipment. Each of the three main classes now has two additional specializations to unlock. These grant stat bonuses and unlock four new skills to use. This gives players who imported a good reason to go back and redo all skills and stats. Two new tiers of equipment also help to further develop characters as they work their way to the new level cap of thirty-five. Don’t expect any surprises here, because this is still the same Dragon Age: Origins gameplay we’re all used to. 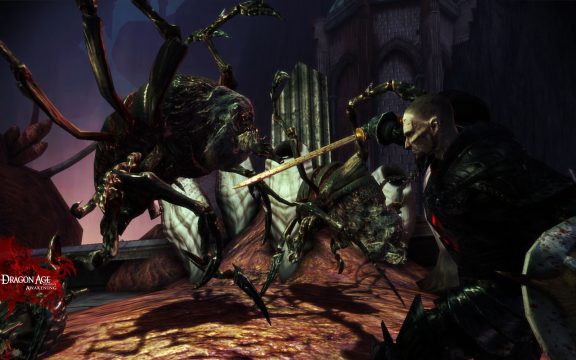 When it comes to presentation, Awakening offers little new other than fresh character designs, original foes, and additional voice actors to accompany them. The graphics are still on par with the main game and the audio is of the same quality. It’s tough for this expansion to score points for originality, but faulting it for that is unfair. It’s clearly meant to be little more than what it is: more Dragon Age. One very impressive aspect here is the sheer amount of things available to do. Other than the main quest, which offers a decent amount of variety, there are plenty of side quests to do for minor characters, party members, or just to help improve the Keep. Awakening could be rushed through in around fifteen hours, but there is easily twenty hours of content here if players find it worth pursuing.

And I did find it very worth pursuing most everything the game tossed at me. I wanted to improve my Keep and keep my townsfolk happy and safe. My party members became people I wanted to invest more time in to help out. My desire to delve deep into dungeons to punish the darkspawn had not waned since my initial trek through Ferelden. Dragon Age: Origins – Awakening serves as a good stopgap between major releases, but it doesn’t fully satisfy the Dragon Age craving. While it had great original characters, it did little with them. The story offers a bridge between the original game and either a sequel or another novel, but does little to tie up any real loose ends. The game just needed more depth, more meaningful decisions to pine over, and more character interaction. With those things it could have worked as a smaller scale spin-off or sequel, but as is, it’s Dragon Age 1.5. It was never meant to be anything more than an expansion, but with so much untapped potential lurking within its story, it feels like it could have been. As such, I often felt like I was judging Awakening as a full game because it was so close to being one, but it’s not. BioWare has crafted more Dragon Age with lots of what made the original amazing, but just missing some key pieces.