Disgaea DS tells the story of Laharl, demon prince of the Netherworld. After waking from an extended nap he discovers that the overlord, his father, has died from choking on a black pretzel. Without anyone to lead the throngs of demons who make the land of the wicked dead their home, what little order once existed has given way to outright rebellion. With his devilishly sassy vassal Etna at his side, Laharl ventures forth to crack some greedy demonheads and grab his father’s title for himself.

If this story sounds familiar, it’s because it is. Disgaea DS was previously published as Disgaea: Hour of Darkness for the PlayStation 2 in 2003, and updated in 2007 for the PlayStation Portable as Disgaea: Afternoon of Darkness. Disgaea DS is a port of the latter game, identical in most particulars, including the five-chapter Etna Mode side story. That’s not to say that it’s a bad story — quite the contrary, it’s handled with appropriate measures of heroics, sap, and humor. The foreshadowing is so great at times to dull the impact of later revelations, but the translation remains consistently entertaining.

Since it is a tactical RPG, most of Disgaea DS‘s playtime is spent moving around a battle grid. The environments are functional, but nothing to blog about. It’s the other fiddly bits that go into each turn that make the core battles so much fun. From positioning efficient combo attacks to tossing enemies and allies across the screen, the core game contains enough variables to consistently stave off auto-pilot mode. Not all of the maps make the most creative use of statistic-modifying geopanels, but their presence is never an aspect that can be ruled out of careful battle planning. The post-game bonus material isn’t nearly as balanced in this respect, but contains unique challenges nonetheless.

When Laharl and company aren’t engaged in combat, they prepare for the next fight at the overlord’s castle. Equipment can be bought, sold, and upgraded. Upgrading equipment consists of traveling inside of a treasured piece of swag and descending through a series of randomly generated dungeons known as the Item World. Every completed floor increases the statistics of the parent item by a small amount. Larger, focused boosts are obtained by killing certain monsters inside of each item. 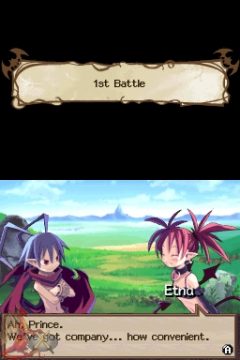 The other main function of the overlord’s castle is to give Laharl access to the Dark Assembly. The demonic legislative branch controls access to a trove of useful bonuses including character abilities, equipment, and new maps. They’ll only provide it to those who they like, however. This is where bribery and overt violence come in. The overlord’s castle also includes a song shop and a statistician who rewards completion-minded players for accumulating loot with tricked out thief gear.

Disgaea DS‘s most notable break with its predecessors is easy to hear: the vast majority of the game’s spoken text has been removed to accommodate its cart size. As a result, many of the story sequences are weaker than they are on other platforms. The music suffers a less noticeable drop in quality, much to the benefit of scenes that depend on sudden, heroic song cues. Not all of the songs work, but they’re balanced by darkly ingratiating carnival pop like “How About a Castle” and the driving surf rock of “Go, Little Girl, Go!” The more repetitive combat tracks are joined in aural hell by the repetitive combat voices. They start out cute enough, but become quickly overplayed. A particularly silly example is how a certain bewinged party member apologizes every time that she heals an ally, using the same quote for her attack abilities.

Voicework fares better during the end-of-episode clips. Each segment previews the coming chapter as an episode in a classical anime show, consisting primarily of non sequiters and absurd metaphor. These segments perfectly encapsulate the game’s anime-inspired sense of humor while providing background dimensions to characters that the rest of the story doesn’t touch upon. The one quirk here is that the vocal cast is the one from Disgaea: Afternoon of Darkness rather than the original. There has been some controversy over which Etna was more true to character; the one featured here is the second one, who also worked on the English dub of the Disgaea anime.

The transition to the Nintendo DS has provided mixed blessings in terms of presentation. Character sprites look incredible, especially when the camera is zoomed in. At full magnification, they come out ahead of the game’s PlayStation 2 sprites in terms of crispness. Unfortunately, this limits visibility to a narrow field. Zooming too far in the other direction causes minor details such as status ailments to fade into the background. Despite the slick, pre-order prinny stylus available from Nippon Ichi’s website, touch screen control is too picky to be a timesaver. The DS buttons remain tight and functional throughout the game. Overall, the DS conversion would be a standard case of required sacrifices were it not for the utility of the top screen mini-map.

The mini-map that dominates the top screen goes far in clarifying what goes where on the battlefield. Every influential object and feature is clearly marked, including geo panels and Item World gateways. Furthermore, it provides information as to which characters have moved each turn. For seeing at a glance what has changed between turns, the mini-map is the best system yet.

Mechanically, Disgaea DS suffers from a number of medium-grade annoyances. The lack of a quick-save feature makes forays into the Item World less suited to short spurts of play than lengthy sessions. There are patches of unsettling system slowdown whenever large herds of monsters move to take their turns. Graphic-intensive special abilities also skip more than they should. Although this problem can be easily solved by turning attack animations off, doing so requires bypassing some of the wild spectacle that makes the game so enjoyable in the first place. Nothing drives home the grand scope of the battles more than attack spells that summon creatures several times larger than the entire stage, or martial artist techniques that launch foes into the depths of the sun — at least the first dozen times that they come up. Anyone with a touch of power-leveling experience will invariably turn attack animations off after a certain point. 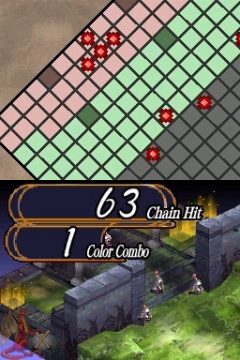 Disgaea is frequently cited as being all about grinding for experience points and rare gear. It would be impossible to deny these claims; the game doesn’t have 9,999 experience levels for nothing. With that in mind, the game fully rewards those who understand its system and are able to milk its quirks and twinges for all that they’re worth. This is applicable on the immediate, tactical level as well as long-term. Setting out without a plan for party growth is a quick way to get mired in avoidable power-leveling. Other times, especially when dealing with the post-game bonus material, even the best strategies won’t mean a thing if each character isn’t able to dish out tens of thousand damage in a single hit.

Luckily, Nippon Ichi knows their audience. Several grind-friendly features are available in Disgaea DS that would have saved countless hundreds of hours for players of the original game. For starters, there’s the aforementioned option to turn off attack animations: one for enemy attacks and one for allies. There’s also a counter on the lower section of the top screen keeping track of how tough the monsters have been pumped up. A basic tenant of most grinding strategies is to increase monster levels while hunting for items and experience, but reducing them for the already-difficult plot battles.

There is very little to recommend this game to one who has already drawn full pleasure from Disgaea: Afternoon of Darkness. It’s the same game, plus four bonus characters. Newcomers and those who’ve only scratched the surface of the original Disgaea are advised to check this one out. While the new features aren’t revolutionary, they make it easier to enjoy a quality game from the near-past.