Disgaea D2: A Brighter Darkness is the sequel to the original game in the Disgaea series, just in time for the tenth anniversary of the series. In addition to the popular original cast returning, the game makes a number of changes to make the gameplay more like the original. Surprisingly, what seems to be a game designed to be a nostalgia trip actually plays like a fresh, slimmed down take on the series, with some interesting new features. The lack of some of Disgaea 4‘s more advanced features is disappointing, and the story fails to consistently capture the over the top humor the series is known for. What it does capture, thankfully, is the addictive strategy RPG gameplay that has kept the series going for ten years.

The story begins with the protagonist Laharl settling in as overlord of the Netherworld after the events of the original game. Seeing that many demons apparently have no idea that he is the overlord, Laharl sets out with his original vassals, Etna the demon and Flonne the former angel, to inform the public. Naturally things don’t go according to plan and they eventually face off with a group loyal to the previous overlord. From there the plot moves to the appearance of Laharl’s long lost angel sister and an invasion of flowers from the home of the angels that threatan to destroy the demon filled netherworld. There are some funny moments, including a whole chapter where Laharl turns into a woman, but on the whole the game’s story really lacks a lot of the over the top insanity and self-referential humor that has made many of the stories in the series so good. Being a direct sequel, there are tons of opportunities for that kind of humor that just never materialize, and many of the favorite side characters from the original game are nowhere to be found. Worse, the plot loses direction and suddenly peters out at the end. It’s a huge missed opportunity, and though nothing in the story is offensively bad, it feels like it tries to coast on the player’s nostalgia. At least the game adds occasional dialog to battle, something the series sorely needed to prevent disconnect between story and gameplay.

Thankfully the gameplay, which makes up most of the player’s time with Disgaea D2, is a completely different story. Gameplay has been the series’ bread and butter, providing relatively straightforward turn-based strategy with a variety of different systems added on to provide a plethora of different customization and grinding options. The game cuts out some of the fat from the more recent games, making it play more in line with the original. The selection of classes is small and familiar, though more open up as the game advances. There’s no class world or map editing, just the item world. Geo-panels, colour-coded sections of a map, now have effects provided by the simpler geo-symbols instead of the stackable and traversable geo-blocks used previously. Character advancement is also simpler, as characters learn new skills automatically as they level and power up those skills simply through repeated use. All these changes could have produced a game that felt like a huge step down from Disgaea 4, but a number of refinements, new features, and fantastic level design prevent this. 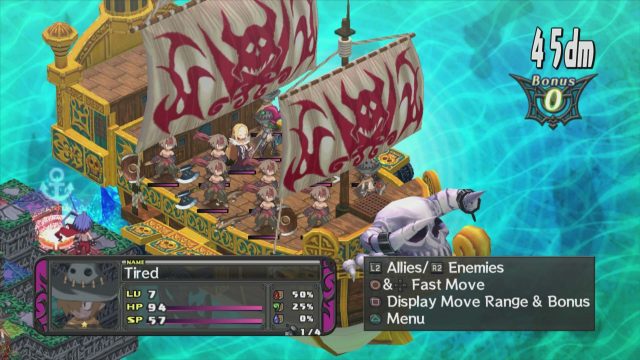 Beware of pirates, now a more frequent occurrence in the item world.

For starters, Disgaea D2 replaces the often cumbersome magichange system from the previous two games with a new monster mounting system. Magichange provided a way to change monster characters into powerful weapons, but only for a short time period and only for selected characters in the player’s party. As the name would suggest, the new mounting system lets characters ride monsters, using them as a damage shield and allowing for special combo attacks. Weapon skills can’t be used while mounted, but magic can, turning the normally frail and slow-moving magic types into mobile death machines. Both characters gain experience regardless of the type of attack used, so this mechanic proves to a fantastic tool for leveling.

The other changes in Disgaea D2 are more along the lines of refinements than full new features. The series has largely stuck with the same set of weapons throughout. This game finally adds a new book weapon type to the mix. With skills and attack power based on intelligence, this new weapon provides a great way for healers and mages to get extra attack power. This serves to be primarily useful for healers, as healing remains a poor way to level up compared to killing enemies. Also new to this game is a change to the item world, a long series of randomly generated levels with weapons and other items used to power them up. Instead of starting directly on the stage, players now enter the item world on ships, which provide a base of operations to work from and make the random levels easier to manage and often less frustrating. Pirates will frequently invade stages in the item world on similar ships, and upon defeating these pirates more ships are made available for players to use. Combined with smaller levels in the item world in general, what once could be a frightening place for novices is now a lot of fun to explore and far less tedious than it could get in previous games.

Balance has always been an issue in the Disgaea series, with heavy grinding often necessary at certain points in the story. Also problematic were the sheer number of secondary activities for leveling characters, which could make the game far too easy for those who dug into everything. Disgaea D2 aims to fix this with a cheat shop that allows for tweaking and even turning off certain gameplay features such as experience gained from battles. Though some of these features were available in some form in previous games, this is the first time they’ve been collected in such a way. Options unlock as the player progresses so not everything is available from the start. Even so, the shop provides a great way for players to tweak the experience specifically to their liking in a way that most games don’t provide. Those intimidated by such options should note that Disgaea D2 has a well-balanced single player campaign that doesn’t require much grinding until the very end. These features are more geared towards more advanced players. 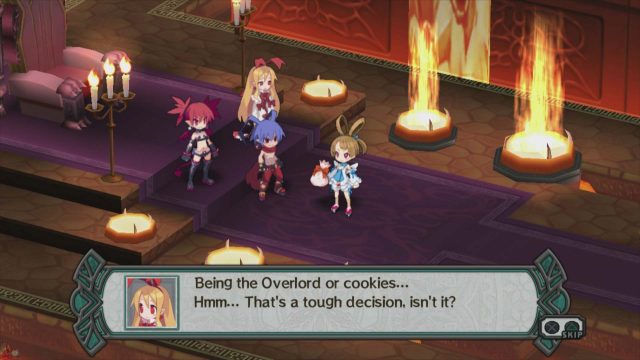 The series’ traditional over the top humor is in short supply in the latter half of the game.

Disgaea 4 was the first game to use full HD sprites and environments, to somewhat mixed results. The sprites were fantastic, but environments and some 3D effects disappointed. Disgaea D2 fixes these issues nicely. Environments are noticeably more consistent, and effects using both 2D and 3D art look fantastic. Character portraits during conversations look great and animate nicely. The whole game has a very clean and consistent look to it, with almost nothing to complain about except that battle animations tend to be a bit on the long side. The developers seemed to anticipate this one complaint, as battle animations can now be skipped with the press of a button. Sound and music contain a lot of reused effects and tracks, but some of the new music mixed in really stands out. The voice work in the game is quite good, with either the original voice actors for the main characters in place, or replacements that sound enough alike that most players won’t notice. The voice acting tends towards to be a bit cheesy at times, but seems to be intentional and usually fits the off-beat humor.

The developers of Disgaea D2: A Brighter Darkness could easily have made a cheap nostalgic cash-in, but luckily this isn’t the result. Though the story is a disappointment, the rest of the game is a joy to play. Somehow eliciting a feeling of nostalgia while adding new features to the Disgaea formula, it manages to be the most accessible entry in the series, making even the advanced features of the series much easier to partake in. Even Disgaea fans who didn’t enjoy the original game will find plenty to like here. It may not quite reach the lofty heights of Disgaea 4, but Disgaea D2: A Brighter Darkness still manages to be one of the brightest entries in the series.