Where Good is Bad and Bad is Hilarious

Disgaea is a series infamous for its challenging gameplay. Critics feel that the game is nothing but a grind-fest, but fans insist that not only is the grinding enjoyable, but the story puts it over the top. In both cases, it applies directly to the latest title: Disgaea 3: Absence of Justice. Fans won’t be disappointed, but the game brings nothing new to the series to bring its critics over to the dark side.

First off, it’s important to note that in the Evil Academy, being bad is good and being good is bad. This is the Netherworld, after all. Mao is the number one Honor Student, which means he never goes to class and never does his homework. He also tries to wreak havoc whenever possible. Raspberyl, on the other hand, is the biggest delinquent, or do-gooder. She’s never late for class and never forgets her homework. When these two try to work with together, the results can be nothing short of hilarious.

Mao’s biggest ambition in life is to defeat his father, King of the Netherworld, so he can take his rightful place in society. The only problem with that is that the strongest demon is always defeated by “the hero” of the story. Since a hero does nothing but good and wholesome acts, how can Mao be the hero to defeat his father and still manage to be the Netherworld’s best Honor Student? Raspberyl is there every step of the way, trying to convince him that being bad (which is to be good) is not such a horrible thing. Mao will hear nothing of the sort and goes out of his way to break more rules and get in even more trouble.

It is an excellent story, but the key is thinking evil. Once the concept that good is bad and bad is good is down pat, the story comes alive. While the voice acting isn’t the highest quality, it should leave few complaints. A couple of side characters are a little flat, but the stars deliver their lines with strong emotion and life. For a niche title, one couldn’t ask for much more. Well, maybe the intro song presented in English would’ve been nice — as an option. 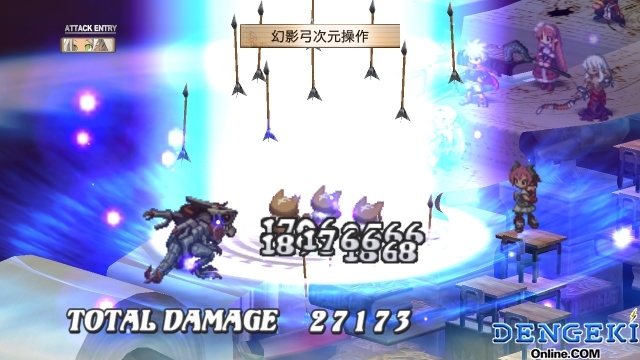 Unfortunately, this is a long, long game. Unraveling the entire story takes hours upon hours of doing extra grinding to fully explore the vast Netherworld. The difficulty does not scale according to the story and extra exploration is always required. Humans can use monsters to Magichange them into more powerful weapons. New skills and classes have to be opened. Weapons have to be powered up. All of these things require time and game money to complete. It’s easy to become distracted with expanding the battle options and not progressing an inch in the game itself.

The battle system is what the Disgaea series has become famous for. The map always starts with a portal to draw multiple characters from, while the enemies are already dispersed around the map. The player has to exhaust all the options before the enemies get their turn. Using normal tactics from other games will make a Disgaea game nearly impossible. Ingenuity is the key with tactics like stacking and throwing characters, or using the combo-attack system to deal damage from multiple characters in a single attack. Disgaea 3 brings a new strategy with the addition of Geo Blocks. Since the Disgaea series already sets itself apart with a truly three-dimensional way of thinking, stacking and destroying towers of Geo Blocks just comes naturally. Most of the time, using the Geo Blocks doesn’t matter that much, but sometimes it is the key to winning a certain map. Some of the puzzles were frustrating to figure out, but overall they are a great addition to the already zany battle system. 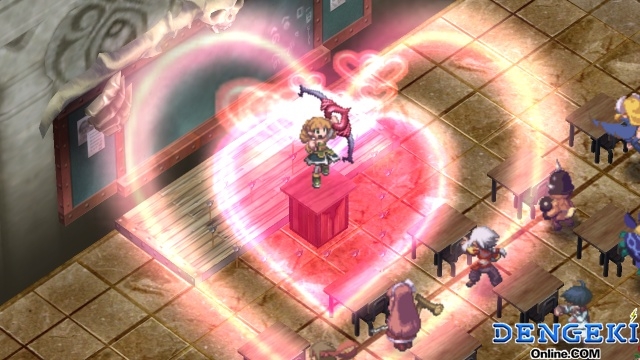 For those who love Disgaea, Disgaea 3 is a welcome addition to the series. With a hilarious, upside-down storyline and the battle system’s tricks still intact, there’s no reason for these fans not to play Disgaea 3. Conversely, there’s little added to this iteration that would make skeptics of the series give it another try. The core of the series, from the grinding to the graphics, remains very much the same as before. Sometimes it’s safer just to give the fans what they want. If only it was also on the console they wanted.