Musing About Some Maintenance

I have a hit-and-miss history with dungeon crawlers, but developer Experience is almost wholly devoted to making games in this genre, so I hoped that would lead to some positive results. The prevailing opinion of the original Demon Gaze is that it has a number of interesting ideas but doesn’t always execute them well, granting an approach to its sequel of equal parts intrigue and trepidation. Thankfully, Demon Gaze II‘s strong mechanics and newcomer-friendly touches help balance out the lack of audio and visual polish, leaving a mostly interesting but occasionally frustrating dungeon crawling experience.

Demon Gaze II opens with a user-created main character waking up in a dungeon. He remembers neither who he is nor why he’s in a dungeon. Thankfully for the amnesiac lead, a cute, young girl named Peg shows up to guide him. Unfortunately, she is taking the main character to a furnace that people are tossed into, so their Star Power can be captured for nefarious purposes. Peg is actually a demon in the employ of Magnastar, the ruler of Asteria. Just as a premature ending to this tale seems to be at hand, the main character unleashes the power of Demon Gaze on Peg, defeating and capturing her in his eye.

After this narrow escape, the hero discovers that he is a member of the Revolutionist Party, a ragtag group who oppose Magnastar — for obvious reasons — and intend to end his brutal reign. The resistance is led by Muse who, along with her sister Prim, are childhood friends of the main character, and it will come as little shock that both harbor romantic feelings for him. Once the hero returns to resistance headquarters, he learns that the population is being manipulated by Magnastar through a subliminal song. In response, the resistance broadcasts an underground radio station, and the main character is tasked with finding crystals in dungeons that act as the antennas for the mind-altering music and staging public concerts to counter the song’s effects.

It should be obvious by this point that Demon Gaze II employs a mixture of well-worn tropes set against bizarre story set pieces that make for a fun, lighthearted tale. While dungeon crawlers are often known for threadbare plots shoehorned in between grinding sessions, Demon Gaze II‘s story and characters are well developed and interesting throughout the game, carrying players past any challenge-induced roadblocks in the gameplay. The ending is especially satisfying, with a final twist that is well set up earlier in the story. 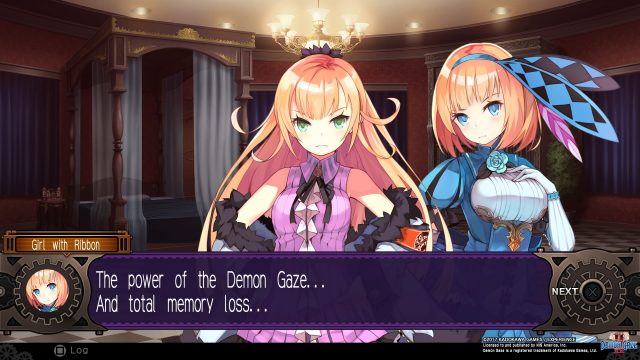 While Demon Gaze II employs plenty of exposition, combat is still at the core of the experience. Demon Gaze II is a first-person dungeon crawler that combines exploration with automapping. The dungeons utilize random encounters as well as enemies that are visible. There are a number of different dungeons arrayed across Asteria, selectable from a map of the city. Each of these dungeons’ major sections will have several Demon Circles, which the player must gain control over by defeating a certain enemy. All the Demon Circles must be controlled by the player to unlock the demon that is defending the special antenna crystal in the area.

These Demon Circles also act as major equipment drop opportunities. Players use crystals that can be found or bought to influence the type and quality of equipment obtained after successfully defeating the enemy within the circle. Demon Gaze II has an incredible number of different weapons, pieces of armor, and accessories to customize the characters with. With seven different types of weapons and armor, each with dozens of pieces in each category combined with systems for upgrading and customizing them, there is a bounty of combinations to outfit a party with.

The party itself is expanded by defeating the bosses of dungeons, where the main character can use his Demon Gaze ability to take control of the demon. There are also sidequests and hidden sections of dungeons where other potential party members can be recruited. These sixteen recruitable characters run the gamut of classes from tanks to thieves to all sorts of mages. It allows the construction many different types of parties to suit varying playstyles.

Combat is turn-based with a five-person party facing enemies head-on. The main character always must be in the party, but the rest of the composition is left to the player as well as how the characters are split between the front line, where characters dole out and take more damage, and the rear, where mages and other under-leveled characters can be protected. The combination of party customization with different character types and weapons along with satisfying turn-based gameplay with a multitude of spells and abilities makes the combat highly enjoyable. Even when grinding sessions are necessary to level up, the combat continues to be engaging and fun.

Long grinding sessions are also aided by another of Demon Gaze II‘s strengths: how easy it is to speed through combat. After picking actions for each party member, there is an option to watch combat play out at normal speed or in a fast-forward mode. After each turn, a repeat command is available that uses the same actions from the previous turn. The repeat command even works in the next enemy encounter, allowing for the programming of a basic attack setup and then fast-forwarding through fights with scrubs. It certainly eases the pain of grinding. 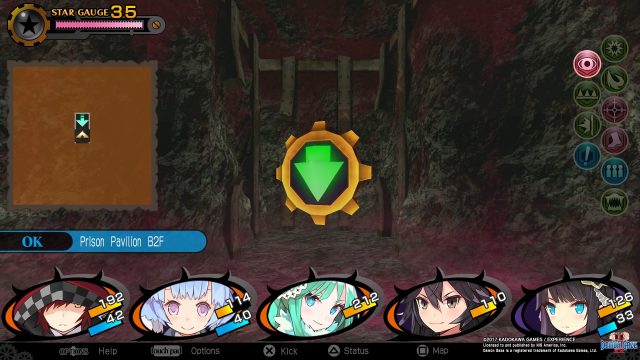 Behold! The majesty of a… staircase?

This is a good thing, because grinding will be necessary. Basic enemies have weaknesses which can be exploited, but on the default difficulty this will rarely be necessary. However, this can lead to a false sense of security, with normal enemies not providing enough challenge to get players used to the multitude of character abilities at their disposal. Boss encounters are far from a cakewalk and players will need to avail themselves of their party’s abilities and exploit weaknesses to succeed. As fun as it is to take down a difficult boss, these encounters are a double-edged sword: they require thoughtful use of the combat system, but at the same time it can be jarring to cruise through a dungeon only to run into a boss that wrecks the party in just a few turns. Whenever one of those roadblocks is hit, it’s often back to the dungeon for some mindless grinding till the party is leveled up.

There are other ways of leveling up characters and, while Demon Gaze may have made the jump to console, this is where the stereotypical Vita roots come through. As party members are recruited, players can perform “maintenance” on the demons. This takes the form of a minigame where a cursor is placed over different parts of the now-scantily-clad demon. Finding the best place for the cursor on the demon — whether they be male or female — elicits moans and increases the affection level of the demon. Each time the level goes up, a date scene is unlocked, and the demon gets significant stat bonuses. This system, combined with other silly additions such as underwear as an armor type, makes it plain to see what type of game this is. It’s more suggestive than truly salacious but, with stats at a premium, these aren’t systems that are wise to ignore.

One area that, unfortunately, can’t be ignored is the graphics. The artwork in the dungeons is incredibly basic. Most of the dungeons appear to have a single floor texture, two or three wall textures, and one type of door, with everything then being copy-and-pasted to create the dungeon. Where a staircase or elevator might be expected to transition between floors, Demon Gaze II utilizes floating green arrows that look as if they come from a bargain clip-art gallery. More effort went into character art and enemies, but the reuse of assets is apparent throughout with pallette swaps and slight alterations used to fill out the fairly large roster of enemies. 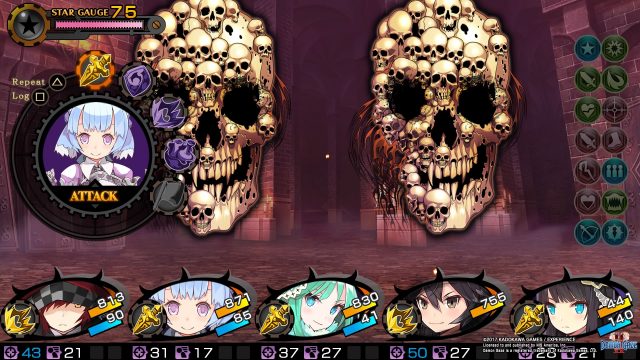 Enemies get a bit more artistic attention than the dungeons.

The lack of variety carries over into the soundtrack as well. Considering that part of the plot revolves around running a pirate radio station, it’s a shame that the music is such a disappointment. Major vocal tracks that tie into the story beats are good, but there isn’t enough variety or quality to hold up over the course of a sixty-plus hour game. Players will be sorely tempted to mute the sound during long grinding sessions so as to not have to listen to the same battle theme over and over.

In contrast, the voice acting is a delight. While there is support for dual-audio, the English voice acting features a number of performances that bring the characters to life and will have players rushing to turn the volume back up once the grinding is done. Muse, leader of the resistance and voiced by Jäd Saxton, is fantastic, with her maniacal, over-the-top laugh making the character sound just a little bit evil. Prometh has a dead-pan delivery that gives her jokes and fourth-wall breaking more impact. Also, Keith Silverstein as Magnastar completely sells him as the antagonist. The voice acting elevates and makes this story even more entertaining.

There are still a few other things worth mentioning about Demon Gaze II and its overflowing number of ideas. The game has an auto-movement feature where a square can be selected on the map and the party will travel to that point quickly with no other input, aiding in the navigation of large dungeons. For newcomers, the difficulty of Demon Gaze II can be adjusted in-game and there is a feature called Salvation’s Light which, upon a party wipe, gives the option to refill party health and magic and continue the fight, keeping all the damage that has already been done to the enemy. Finally, for players that don’t want the fun to end, there is extensive post-game content with story beats that tie into the first game.

Looking back at Demon Gaze II, it’s a difficult game to have concise, summarized thoughts about. Parts of the game are genuinely impressive: the voice acting makes the story a delight, the character and party customization is deep and involving, and I wish every turned-based RPG would include the option for battles to move so quickly. However, the graphics are sub-par, the music can’t carry such a lengthy experience, and there are occasional difficulty spikes that can only be solved by extensive grinding. Overall, Demon Gaze II is still a strong and enjoyable dungeon crawler, albeit not without some flaws.